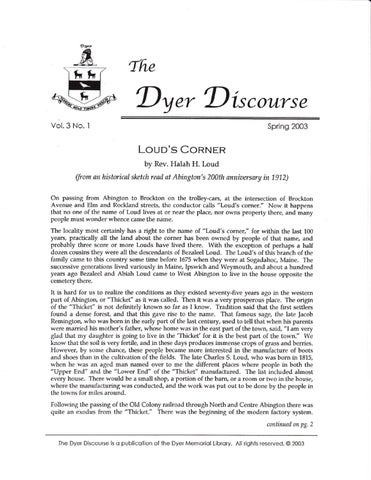 On passing from Abington to Brockton on the trolley-cars, at the intersection of Brockton Avenue and Elm and Rockland streets, the conductor calls "Loud's corner." Now it happens that no one of the name of Loud lives at or near the place, nor owns property there, and many people must wonder whence came the name.

right to the name of "Loud's corrter," for within the last 100 years, practically all the land about the corner has been owned by people of that name, and probably three score or more Louds have lived there. With the exception of perhaps a half dozen cousins they were all the descendants of Bezaleel Loud. The Loud's of this branch of the family came to this country some time before 1675 when they were at Sogadahoc, Maine. The successive generations lived variously in Maine, Ipswich and Weymouth, and about a hundred years ago Bezaleel and Abiah Loud came to West Abington to live in the house opposite the The locality most certainly has a

It is hard for us to realize the conditions as they existed seventy-five years ago in the western part of Abington, or "Thicket" as it was called. Then it was a very prosperous place. The origin of the "Thicket'' is not definitely known so far as I know. Tradition said that the first settlers found a dense forest, and that this gave rise to the name. That famous sage, the late Jacob Remington, who was born in the early part of the last century, used to tell that when his parents were married his mother's father, whose home was in the east part of the town, said, "I am very glad that my daughter is going to live in the 'Thicket' for it is the best part of the town." We know that the soil is very fertile, and in these days produces immense crops of grass and berries. However, by some chance, these people became more interested in the manufacture of boots and shoes than in the cultivation of the fields. The late Charles S. Loud, who was born in 1815, when he was an aged man named over to me the different places where people in both the "Upper End" and the "Lower End" of the "Thicket" manufactured. The list included almost every house. There would be a small shop, a portion of the barn, or a room or two in the house, where the manufacturing was conducted, and the work was put out to be done by the people in the towns for miles around. Following the passing of the Old Colony railroad through North and Centre Abington there was quite an exodus from the "Thicket." There was the beginning of the modern factory system. continued on pg. 2

attic, and the several additions to the building the manufacture of boots was carried

It's been a long time since the last newsletter - much longer than I had intended. But we have not been sitting idle. On the contrary, we have been working hard on getting the repairs to the water damage completed.

M*y thanks to Eddie Belcher and Mike Murphy for the impeccable finish they've put on the paint work. The rooms look stunning, and ready for new displays. We are currently plaaning a long-term

Abington history exhibit in memory of town historian extraordinaire Martha Campbell to go into the large room on the second floor. Please keep an eye out for our exhibit opening announcement.

Memorial Day is just around the corner, and the [hopefully] warmer weather with it. I'd like to wish you all a good and safe summer! aa

The Faxons, Dunhams, Blanchards, Orcutts, Wales, Fords, as well as the Louds and other families in the course of a few years had sent a large proportion of the young life to the Centre, and other parts of the town. Thirty years ago one often heard the expression, "When I came out of the 'Thicket."'

Alden Snell Loud, oldest son of BezaleeL was the pioneer of his family. Sometime in the early [eighteen-] thirties Alden Loud settled at what is now known as Loud's Corner. One corner of what is now the W. S. O'Brien factory was soon a store, a small one story building. In the course of time several additions were made, and in the very early forties it had become a great three storied factory. I remember hearing Alden Loud say about 1880 that when he built that building it was the largest boot factory in Plymouth County. On the fust floor was conducted a large general store, on the third floor, there was a great

famous for shows, dances, and particularly so as a rallying point for the Democrats of the town. On the second floor, and the

Alden Loud resided in the house south east of the factory, and the house now standing on the other side of the factory was formerly a part of his residence. In the rear of what is now Mr. O'Brien's residence, in company with Charles Dunham, under the firm name of Loud & Dunham, Alden Loud manufactured shoes, and on the corner of Bedford Street and Brockton Avenue, in a large building which formerly occupied the site of the residence of the late Dr. Dickermar; in company withJacob Shaw, under the firm name of Loud & Shaw, he manufactured boots. This building, erected by Charles A. Cobb, was afterward moved to the corner of Washington and Thaxter streets, and has since then, in recent years been taken down and carried to Whihman and is now the office of the Whitnnan Times. One after another of his brothers and sisters also came to the Centre. Dexter, my grandfather, bought of Charles A. Cobb the house on Bedford Street next to the residence of Mr. Isaac C. Howland. Charles S., the youngest brother, for many years lived in a cottage house on the north side of the street. This house now stands on the corner of Ehn Street, opposite the fountain, and Charles S. Loud for the last thirty years of his life lived in the house next to it, formerly the home of Dr. ]ameson, and before him of Dr. Harris. The four sisters of Alden Loud all married and made their homes at the Centre.

Now came the immigration of the Irish in the strenuous times about 1848. Alden Loud furnished many of them with employment. He opened up Block Street and built homes for those men and along Rockland Street. Many of the older people will remember that long, low "block" built of sugar boxes, etc., and housing nine families. He sold them their groceries and taught them to be faithful democrats. It is remembered that when my grandfather's place was to be sold in 1868 that Alden Loud sold off ten of these houses. Loud's store was a land mark and well rememberedby an continued on pg. 3

octogenarian of Taunton where it was talked about when he was a young man. Someone ought to write about these stalwart men and women who came from keland and made homes for themselves at Loud's Corner, and in other sections of Abington. They were a worthy set of people, keen of wit, industrious, thrifty, and true home builders.

In the openingparagraph of this sketch I spoke of the stone watering trough. Perhaps a word regarding that may rightly belong here. A decade before the Civil War the triangular green had been graced by a splendid great flag pole. I remember playing about it in 1870 but I do not know just when it was removed. I distinctly recall that one night in the store in 1878, the usual number of neighbors were comfortably distributed about on the several barrels, boxes and bags of grain, talking about things in general, when someone spoke of the need of a good well of water at the corner. Several said they would give money and others said they would give labor. My father had beenbusy at his desk, but was drawn into the discussion. He said, "Do you mean business?" All assured him that they did, so he summed up the amounts that those present would give, and then left the store and called on several neighbors at their homes. Pledges amounting to over $100.00 were secured that night. Mr. John F. Wheeler, a retired box maker, and Mr. Charles S. Loud had the matter in charge, and work was begun at once. The well was sunk about 40 feet into the solid rock and a great many men around the corner gave day after day of their time, and most of the original contributors doubled their contributions. I think no one ever knew the total cost. The pump, a big log one, was purchased from Peter Wales of Randolph and cost $31.50.

That summer Mr. Cornelius T. Dunham was visiting in Abington, and I can see him as though it were yesterday, as he sat in a specially provided chair in front of the counter of the store. He was a large distinguished looking man. He said that we

wanted a good trougtr, and that he had a

friend inVermont, who was in the quarry business, and that he could get special terms, and that he would be glad to make us a present of the trough. When it was all complete, Uncle Charles Loud had the first drink from the new pump and I had the second. For years this famous well was a great blessing to man and beast, and even after the coming of Big Sandy water, it was a number of years before many families ceased to get their drinking water from the depths of this coof pure, we& whichfor twenty-five years did good service. But all traces of a well have now been removed and the trough at present stands some feet back of its original site. Soon it will be forgotten that there ever was a well, but it had its day, and like the people who for four decades had so large a part in the life of Loud's Corner, it is now but a memory, and known to very few people. Reprinted from "A Collection of Historical Papers on Abington," preparedby the Historical Research Committee of the Abington Woman's Club, 1930. Reo. Loud's original papu is in the Dyer's collections.

aaa PnEsEnvRTIoN NEWS Many of you who knew Dr. George \tVhiting know of his passion for the Buffum automobile. At the turn of the 20th century, Herbert H. Buffumbuilt a number of cars in his factory on Centre Avenue in Abington including what is believed to be the first 8cylinder car made in the United States. Six photographs and three lithographs

from the H. H. Buffum collection have been conserved. These items were glued to an acidic board and some had ink marks on the image. Conservators at Boston Art Conservation successfully detached the pieces from the board, removed the ink marks, and stabilized the prints. Thaxk you to all who funded this proiect in memory of Doc Whiting. I think he would have been very pleased with the results.

www.dyerlibrary.org We are pleased to announce the Dyer's new website at www.dyerlibrary.org. Many thanks to volunteer Andy Oakland of Somerville, whose efforts made it possible for us to have a presence on the world wide web. The website is aLnost complete; a few areas are stillbeing worked on. One area where we need your help is the "External Resources" section. Please send us the web address of your favorite page(s) - sites that you find helpful in your history/genealogy research. We will add alink to those pages from our website. We hope to,regularly update our web page with events and exhibits at the Dyer, and hopefully expand the site to add more features. So please re-visit our website from time to time as we continue to evolve.