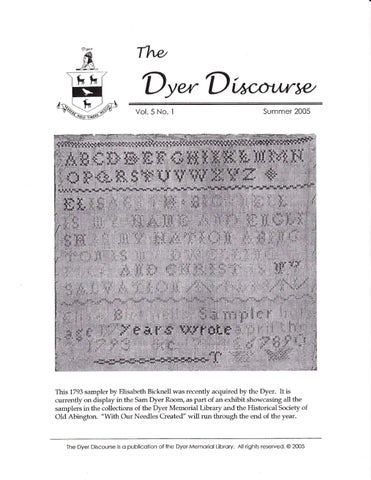 This 1793 sampler by Elisabeth Bicknell was recently acquired by the Dyer. It is currently on display in the Sam Dyer Room, as part of an exhibit showcasing all the samplers in the collections of the Dyer Memorial Library and the Historical Society of Old Abington. "With Our Needles Created" will run through the end of the year.

THE ROI_E OT SNHAPLERS IN THE EDUcANION OF AMERICAN GIRLS Textile historians believe that the first samplers date back to the Middle Ages, made by young women who lived during the millennium after the fall of the Roman Empire in the fifth century. By the time Andrew Ford, Abington s pioneer settler, built his firsthouse in the ]'660s where the old Indian trail crossed the Schumatuscacant River, sampler making had flourished for centuries in Europe- In the New World, however, the early colonial era was a period that left little time to pursue activities not essential for one's survival in the wilderness. Hence few samplers were made lr-17thcentury America, and even fewer survive to this day. In the following century, as growth and prosperity settled upon life in the colonies, girls' education became an amenity that could be considered. By the mid-1700s, daughters of wealthy landowners were often sent to private "finishirrg schools," where the girls were taught "accomplishments." Since skillful embroidery was the rrark of a well brought up young woman, needlework instruction grew in popularity. Sampler making became an activity predominantly undertaken in private schools; it was not the domestic pastime of mothers and daughters. Towards the end of the 18th century and the beginning of the 19th century, there was a proliferation of private schools for girls- This may be linked to the .emergence of a merchant class, whose daughters would of course have to be as educated as the daughters of the wealthy landowners. The increase in the number of schools during this period also meant an increase in needlework instruction and

sampler making. In fact, the early decades of the 19th century (ca. 18001835) saw the greatest production of samplers, and it was during this time that samplers, as a medium of learning, evolved into a highly decorative stitching exercise. A prit of samplers made during the early years of this period by sisters N*.y and Sally Ford, descendants of the aforementioned Andrew Ford, are currently on display in the "With Our Needles Created" exhibit.

A number of distinct$ American styles emerged as these schoolgirl embroideries flourished. In and around Boston ca. 1800, the most comrnon design is

patterned #ter the English sampler of the Stuartperiod. These samplers were usually borderless with alphabets and numbers in narrow bands extending across the piece, as shown in the Eliza Bicknell sampler pictured on the previous page. The design often also featured a traditional verse and an inscription of the maker. As the style evolved, a pictorial element was added along the base - an opportunity for the young lady to display her individual creativity. Itr due course, borders became wider and more elaborate surrounding a center panel which still had the characteristics of the earlier design. By the 1840s, the enthusiasm for sampler making had diminished considerably. As a consequence, there was a general decline in the number and quality of samplers produced. This is probably indicative of the attitudes of women's education in America, since the demise of the most prolific period of sampler making coincided with the rise of higher education for women. No longer satisfied with leaming mere "accomplishments," cantinueil on pg. 3

young ladies of the mid-19th century were pursuing a more rigorous academic curriculum. As the finishing schools disappeared, colleges and universities welcoming female students were established. In the 1830s, Oberlin College became the first coeducational college in the United States, and the first of the Seven Sisters schools, ML Holyoke College, was founded. M*y others followed in subsequent decades. As a result, instead of being lirnited to a life of domesticity, girls could look forward to any number of professions. Their way was paved by women such as Dr. Elizabeth Blackwell (M.D., Medical Institute of Geneva, NY, \849), the first American woman with a mefical degree, and EllenSwallow Richards (8.S., M.I.T.,1873), the first female professional chemist in the U.S. From this point on, embroidery and samplermaking became an avocation. No longer relevant to education of girls, samplers became purely a pastime taken up simply for the pleasure of creating a work of art to be enjoyed for its own sake. Resources:

aaa Fnonn THE DIRECToR I never thought that the internet would play such a vital role in adding to our collections. However, thanks to the World Wide Web and eBay online auctions, far-flung items of Abington origin can now be found at the touch of a button or a click of the mouse.

Among out recent acquisitions, the most notable is a 2O0-year-old sampler made by Sally Ford, a gift from Pam & MalcoLrr IAlhiting and Doug Ulwick, who saw it on eBay. This piece is not only significant in its own righg but also because it is a companion piece to another sampler already in the Dyer collection - one made by Nancy Ford, Sally's older sister. Both pieces, as well as other samplers in our collection, ale currently on exhibit in the Sam Dyer room. I hope you will come visit and *joy this rare collection of early Abington samplers. Meanwhile, when you're surfing the net, please keep an eye out for us and let us know if you come across any Abington related items which may be pertinent to our collections.

CURRENTLY If{ THE SAM DYEN ROONA

With Our Neeilles Created - an exhibition featuring the samplers of Old Abington young ladies in the 18th and L9th centuries. 15 April2005 to lSJanwary 2006.

-The Role of Samplers in The Education of American Girls: Decorative stitching in the early 19th C., - "With Our Needles Created" Exhibitio...

-The Role of Samplers in The Education of American Girls: Decorative stitching in the early 19th C., - "With Our Needles Created" Exhibitio...