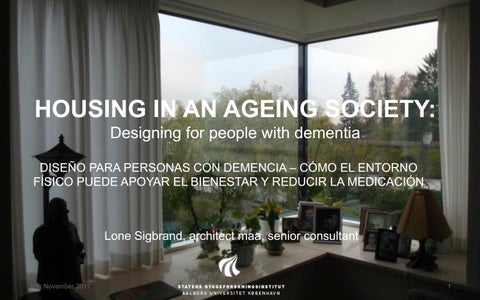 Programme Background and status for the work in Denmark Dementia and the physical environment The main design approaches : - Homeliness and atmosphere - Orientation - Daylight and artificial light - Sensory experiences related to nature

Work regarding dementia at SBi Start - 2015: • Ministry of Health and Elderly in collaboration with the Ministry of Immigration, Integration and Housing • 2 million DKK (app. 270,000 EUR) to SBi • 48 million DKK (app. 6,5 million EUR) to improve exsisting care homes Purpose and objectives: • To find out if and how the design of the physical environment can support the remaining abilities of people with dementia in order to • promote well-being and quality of life • reduce use of force and medication •

Develop a &quot;tool&quot; in interaction with building codes and other guidelines

The National Dementia Action Plan 2025 Fokus on the person behind the disease Five areas – 23 initiatives: • Early detection and better quality in investigation and treatment • Better quality in care and rehabilitation • Support and counseling for relatives of people with dementia • Dementia-friendly communities and housing • Increased level of knowledge and skills.

care philosophy caregivers WELL-BEING for the person with dementia

The most common of the 200 dementia diseases Lewy body and Parkinson&#39;s dementia 6%

Dementia friendly housing ü Promotes residents&#39; safety and security ü Takes into consideration the disability, living with weakened memory and altered sensory perception ü Supports the person&#39;s ability to manage himself as much as possible ü Allows the resident’s to maintain his or her autonomy by, e.g, going out in a safe environment ü Supports the resident&#39;s identity ü Promotes the possibility of meaningful activities ü Housing with the opportunity to live your life

Samspil med omgivelser Research supports that the design of the physical environment may influence: Everyday life, well-being, stress-level, health and orientation for people with dementia. Homeliness is emphasized again and again in research as important. But how do we build and create care homes that actually are homely and have a good atmosphere?

Moving from home to a care home What is a home? A home is a place we have control over Own things, own choices Individuality is expressed &quot;Traces&quot; of human activities When you have to move: Loss of control - also over physical surroundings From the inside From the outside Loss of individuality? One person among several others at the same time as demands from and care for caregivers. Can the &#39;home&#39; be transferred to the care home? 10th November 2017

Atmosphere - a matter of choosing and rejecting

Choose Small scale Physical environments, where residents have the feeling of being in control Recognition in terms of ways residents have lived earlier in their lives Atmosphere, where you feel at ease.

Orientation • Study of 450 people with light to severe dementia. • Between 8 and 35 people in each housing group. • Different design of corridors.

• The size of the housing group was overall crucial for persons with dementia&#39;s ability to orient beyond the design of the floor plan. • It was the easiest for people with dementia to find their way in housing groups of 8-10 people. 10th November 2017

Barriers • Elevator is a big barrier, which can cause anxiety attacks and frustration. • Monotome repetitions, e.g long corridor with many similar doors. • Many options for change of direction. • Deep niches in corridors, from which there is no overview to the rest of the housing group. • Multiple rooms with the same function, eg 2 living rooms, similar to each other.

Supporting elements â&amp;#x20AC;˘ Colors can clarify a room, e.g. doors, panels and door frames can have a contrasting color to the wall and floor. Doors for the staff same color as the walls. â&amp;#x20AC;˘ Floors and other surfaces should be single-colored, as many people with dementia might think that something is lying on the floor if it is patterned due to poor depth perception.

Use of colors â&amp;#x20AC;˘ Colors, especially red and yellow, can also be used to highlight elements. This can be crucial for a person with dementia to find e.g the handrail or the toilet. â&amp;#x20AC;˘ Colors should be matte, as shiny surfaces can give glare and unpleasant mirroring.

Design for people with dementia

â&amp;#x20AC;&amp;#x153;The Theory of Supportive Gardensâ&amp;#x20AC;? A stress-reducing effect of a garden is dependent on the extent to which it allows: - The feeling of being in control - Social support - Physical activity - Positive experiences - Sensory stimulation from nature

The effect of contact with nature for people with dementia Research results indicate beneficial effects on health and well-being: - improved well-being and mood - fewer cases of problematic behavior - less use of drugs fewer drops - improved sleep rhythm Nature can therefore be beneficially included as part of an economically sound and non-pharmacological strategy for improved quality of life

People with dementia achieve better well-being, sleep, health and need less medicine and the caregivers have to use less force due to less frustration and agitation among the residents.

THANK YOU FOR YOUR ATTENTION! LONE SIGBRAND LOS@SBI.AAU.DK 10th November 2017 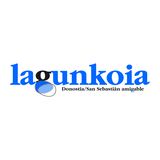