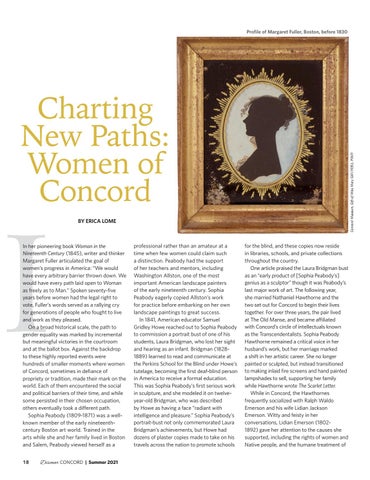 Profile of Margaret Fuller, Boston, before 1830

In her pioneering book Woman in the Nineteenth Century (1845), writer and thinker Margaret Fuller articulated the goal of women’s progress in America: “We would have every arbitrary barrier thrown down. We would have every path laid open to Woman as freely as to Man.” Spoken seventy-five years before women had the legal right to vote, Fuller’s words served as a rallying cry for generations of people who fought to live and work as they pleased. On a broad historical scale, the path to gender equality was marked by incremental but meaningful victories in the courtroom and at the ballot box. Against the backdrop to these highly reported events were hundreds of smaller moments where women of Concord, sometimes in defiance of propriety or tradition, made their mark on the world. Each of them encountered the social and political barriers of their time, and while some persisted in their chosen occupation, others eventually took a different path. Sophia Peabody (1809-1871) was a wellknown member of the early nineteenthcentury Boston art world. Trained in the arts while she and her family lived in Boston and Salem, Peabody viewed herself as a 18

professional rather than an amateur at a time when few women could claim such a distinction. Peabody had the support of her teachers and mentors, including Washington Allston, one of the most important American landscape painters of the early nineteenth century. Sophia Peabody eagerly copied Allston’s work for practice before embarking on her own landscape paintings to great success. In 1841, American educator Samuel Gridley Howe reached out to Sophia Peabody to commission a portrait bust of one of his students, Laura Bridgman, who lost her sight and hearing as an infant. Bridgman (18281889) learned to read and communicate at the Perkins School for the Blind under Howe’s tutelage, becoming the first deaf-blind person in America to receive a formal education. This was Sophia Peabody’s first serious work in sculpture, and she modeled it on twelveyear-old Bridgman, who was described by Howe as having a face “radiant with intelligence and pleasure.” Sophia Peabody’s portrait-bust not only commemorated Laura Bridgman’s achievements, but Howe had dozens of plaster copies made to take on his travels across the nation to promote schools

for the blind, and these copies now reside in libraries, schools, and private collections throughout the country. One article praised the Laura Bridgman bust as an “early product of [Sophia Peabody’s] genius as a sculptor” though it was Peabody’s last major work of art. The following year, she married Nathaniel Hawthorne and the two set out for Concord to begin their lives together. For over three years, the pair lived at The Old Manse, and became affiliated with Concord’s circle of intellectuals known as the Transcendentalists. Sophia Peabody Hawthorne remained a critical voice in her husband’s work, but her marriage marked a shift in her artistic career. She no longer painted or sculpted, but instead transitioned to making inlaid fire screens and hand painted lampshades to sell, supporting her family while Hawthorne wrote The Scarlet Letter. While in Concord, the Hawthornes frequently socialized with Ralph Waldo Emerson and his wife Lidian Jackson Emerson. Witty and feisty in her conversations, Lidian Emerson (18021892) gave her attention to the causes she supported, including the rights of women and Native people, and the humane treatment of