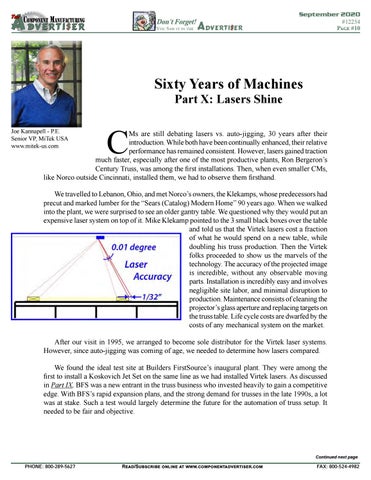 Don’t Forget! You Saw it in the

Ms are still debating lasers vs. auto-jigging, 30 years after their introduction. While both have been continually enhanced, their relative performance has remained consistent. However, lasers gained traction much faster, especially after one of the most productive plants, Ron Bergeron’s Century Truss, was among the first installations. Then, when even smaller CMs, like Norco outside Cincinnati, installed them, we had to observe them firsthand. We travelled to Lebanon, Ohio, and met Norco’s owners, the Klekamps, whose predecessors had precut and marked lumber for the “Sears (Catalog) Modern Home” 90 years ago. When we walked into the plant, we were surprised to see an older gantry table. We questioned why they would put an expensive laser system on top of it. Mike Klekamp pointed to the 3 small black boxes over the table and told us that the Virtek lasers cost a fraction of what he would spend on a new table, while doubling his truss production. Then the Virtek folks proceeded to show us the marvels of the technology. The accuracy of the projected image is incredible, without any observable moving parts. Installation is incredibly easy and involves negligible site labor, and minimal disruption to production. Maintenance consists of cleaning the projector’s glass aperture and replacing targets on the truss table. Life cycle costs are dwarfed by the costs of any mechanical system on the market. After our visit in 1995, we arranged to become sole distributor for the Virtek laser systems. However, since auto-jigging was coming of age, we needed to determine how lasers compared. We found the ideal test site at Builders FirstSource’s inaugural plant. They were among the first to install a Koskovich Jet Set on the same line as we had installed Virtek lasers. As discussed in Part IX, BFS was a new entrant in the truss business who invested heavily to gain a competitive edge. With BFS’s rapid expansion plans, and the strong demand for trusses in the late 1990s, a lot was at stake. Such a test would largely determine the future for the automation of truss setup. It needed to be fair and objective. 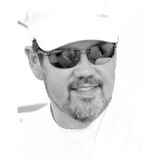