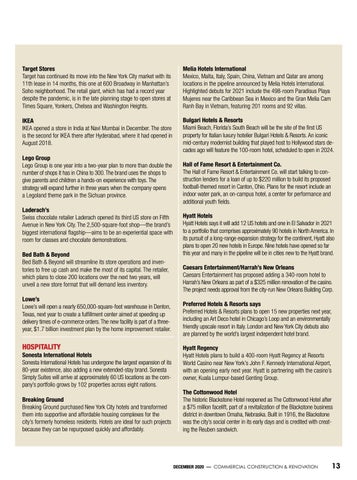 Target Stores Target has continued its move into the New York City market with its 11th lease in 14 months, this one at 600 Broadway in Manhattan’s Soho neighborhood. The retail giant, which has had a record year despite the pandemic, is in the late planning stage to open stores at Times Square, Yonkers, Chelsea and Washington Heights.

IKEA IKEA opened a store in India at Navi Mumbai in December. The store is the second for IKEA there after Hyderabad, where it had opened in August 2018.

Lego Group Lego Group is one year into a two-year plan to more than double the number of shops it has in China to 300. The brand uses the shops to give parents and children a hands-on experience with toys. The strategy will expand further in three years when the company opens a Legoland theme park in the Sichuan province. Laderach’s Swiss chocolate retailer Laderach opened its third US store on Fifth Avenue in New York City. The 2,500-square-foot shop—the brand’s biggest international flagship—aims to be an experiential space with room for classes and chocolate demonstrations. Bed Bath & Beyond Bed Bath & Beyond will streamline its store operations and inventories to free up cash and make the most of its capital. The retailer, which plans to close 200 locations over the next two years, will unveil a new store format that will demand less inventory. Lowe’s Lowe’s will open a nearly 650,000-square-foot warehouse in Denton, Texas, next year to create a fulfillment center aimed at speeding up delivery times of e-commerce orders. The new facility is part of a threeyear, $1.7 billion investment plan by the home improvement retailer.

Sonesta International Hotels Sonesta International Hotels has undergone the largest expansion of its 80-year existence, also adding a new extended-stay brand. Sonesta Simply Suites will arrive at approximately 60 US locations as the company’s portfolio grows by 102 properties across eight nations. Breaking Ground Breaking Ground purchased New York City hotels and transformed them into supportive and affordable housing complexes for the city’s formerly homeless residents. Hotels are ideal for such projects because they can be repurposed quickly and affordably.

Hall of Fame Resort & Entertainment Co. The Hall of Fame Resort & Entertainment Co. will start talking to construction lenders for a loan of up to $220 million to build its proposed football-themed resort in Canton, Ohio. Plans for the resort include an indoor water park, an on-campus hotel, a center for performance and additional youth fields. Hyatt Hotels Hyatt Hotels says it will add 12 US hotels and one in El Salvador in 2021 to a portfolio that comprises approximately 90 hotels in North America. In its pursuit of a long-range expansion strategy for the continent, Hyatt also plans to open 20 new hotels in Europe. Nine hotels have opened so far this year and many in the pipeline will be in cities new to the Hyatt brand. Caesars Entertainment/Harrah’s New Orleans Caesars Entertainment has proposed adding a 340-room hotel to Harrah’s New Orleans as part of a $325 million renovation of the casino. The project needs approval from the city-run New Orleans Building Corp. Preferred Hotels & Resorts says Preferred Hotels & Resorts plans to open 15 new properties next year, including an Art Deco hotel in Chicago’s Loop and an environmentally friendly upscale resort in Italy. London and New York City debuts also are planned by the world’s largest independent hotel brand. Hyatt Regency Hyatt Hotels plans to build a 400-room Hyatt Regency at Resorts World Casino near New York’s John F. Kennedy International Airport, with an opening early next year. Hyatt is partnering with the casino’s owner, Kuala Lumpur-based Genting Group. The Cottonwood Hotel The historic Blackstone Hotel reopened as The Cottonwood Hotel after a $75 million facelift, part of a revitalization of the Blackstone business district in downtown Omaha, Nebraska. Built in 1916, the Blackstone was the city’s social center in its early days and is credited with creating the Reuben sandwich.