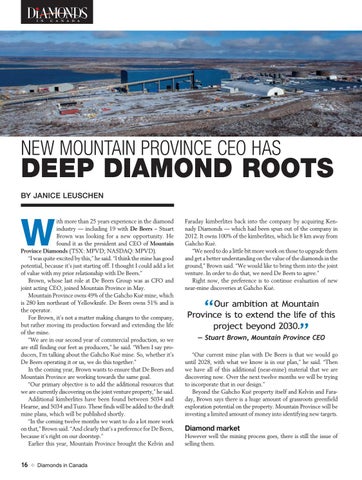 ith more than 25 years experience in the diamond industry — including 19 with De Beers – Stuart Brown was looking for a new opportunity. He found it as the president and CEO of Mountain Province Diamonds (TSX: MPVD; NASDAQ: MPVD). “I was quite excited by this,” he said. “I think the mine has good potential, because it’s just starting off. I thought I could add a lot of value with my prior relationship with De Beers.” Brown, whose last role at De Beers Group was as CFO and joint acting CEO, joined Mountain Province in May. Mountain Province owns 49% of the Gahcho Kué mine, which is 280 km northeast of Yellowknife. De Beers owns 51% and is the operator. For Brown, it’s not a matter making changes to the company, but rather moving its production forward and extending the life of the mine. “We are in our second year of commercial production, so we are still finding our feet as producers,” he said. “When I say producers, I’m talking about the Gahcho Kué mine. So, whether it’s De Beers operating it or us, we do this together.” In the coming year, Brown wants to ensure that De Beers and Mountain Province are working towards the same goal. “Our primary objective is to add the additional resources that we are currently discovering on the joint venture property,” he said. Additional kimberlites have been found between 5034 and Hearne, and 5034 and Tuzo. These finds will be added to the draft mine plans, which will be published shortly. “In the coming twelve months we want to do a lot more work on that,” Brown said. “And clearly that’s a preference for De Beers, because it’s right on our doorstep.” Earlier this year, Mountain Province brought the Kelvin and

Faraday kimberlites back into the company by acquiring Kennady Diamonds — which had been spun out of the company in 2012. It owns 100% of the kimberlites, which lie 8 km away from Gahcho Kué. “We need to do a little bit more work on those to upgrade them and get a better understanding on the value of the diamonds in the ground,” Brown said. “We would like to bring them into the joint venture. In order to do that, we need De Beers to agree.” Right now, the preference is to continue evaluation of new near-mine discoveries at Gahcho Kué.

Our ambition at Mountain “ Province is to extend the life of this project beyond 2030. ” — Stuart Brown, Mountain Province CEO

“Our current mine plan with De Beers is that we would go until 2028, with what we know is in our plan,” he said. “Then we have all of this additional (near-mine) material that we are discovering now. Over the next twelve months we will be trying to incorporate that in our design.” Beyond the Gahcho Kué property itself and Kelvin and Faraday, Brown says there is a huge amount of grassroots greenfield exploration potential on the property. Mountain Province will be investing a limited amount of money into identifying new targets.

Diamond market However well the mining process goes, there is still the issue of selling them.