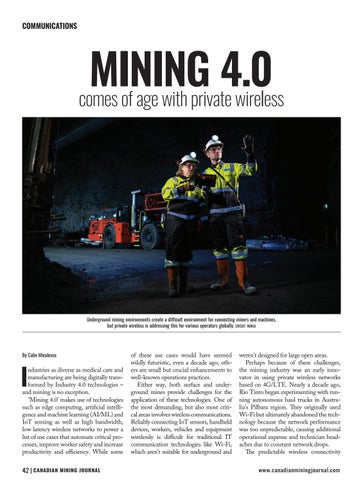 ndustries as diverse as medical care and manufacturing are being digitally transformed by Industry 4.0 technologies – and mining is no exception. ‘Mining 4.0’ makes use of technologies such as edge computing, artificial intelligence and machine learning (AI/ML) and IoT sensing as well as high bandwidth, low latency wireless networks to power a list of use cases that automate critical processes, improve worker safety and increase productivity and efficiency. While some 42 | CANADIAN

of these use cases would have seemed wildly futuristic, even a decade ago, others are small but crucial enhancements to well-known operations practices. Either way, both surface and underground mines provide challenges for the application of these technologies. One of the most demanding, but also most critical areas involves wireless communications. Reliably connecting IoT sensors, handheld devices, workers, vehicles and equipment wirelessly is difficult for traditional IT communication technologies like Wi-Fi, which aren’t suitable for underground and

weren’t designed for large open areas. Perhaps because of these challenges, the mining industry was an early innovator in using private wireless networks based on 4G/LTE. Nearly a decade ago, Rio Tinto began experimenting with running autonomous haul trucks in Australia’s Pilbara region. They originally used Wi-Fi but ultimately abandoned the technology because the network performance was too unpredictable, causing additional operational expense and technician headaches due to constant network drops. The predictable wireless connectivity www.canadianminingjournal.com