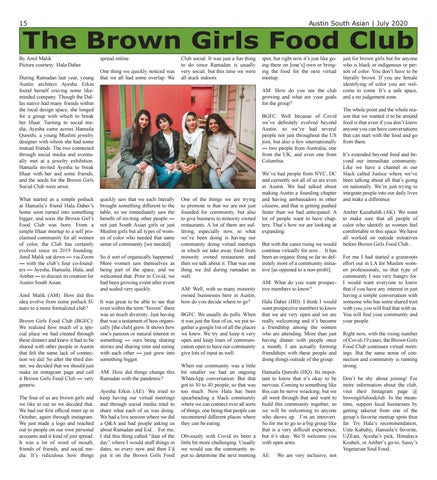 During Ramadan last year, young Austin architect Ayesha Erkin found herself craving some likeminded company. Though the Dallas native had many friends within the local design space, she longed for a group with which to break her Iftaar. Turning to social media, Ayesha came across Hamaila Qureshi, a young Muslim jewelry designer with whom she had some mutual friends. The two connected through social media and eventually met at a jewelry exhibition. Hamaila invited Ayesha to break Iftaar with her and some friends, and the seeds for the Brown Girls Social Club were sewn. What started as a simple potluck at Hamaila’s friend Hala Daher’s home soon turned into something bigger, and soon the Brown Girl’s Food Club was born. From a simple Iftaar meetup to a self proclaimed community for all women of color, the Club has certainly evolved since its 2019 founding. Amil Malik sat down — via Zoom — with the club’s four co-founders — Ayesha, Hamaila, Hala, and Amber — to discuss its creation for Austin South Asian. Amil Malik (AM): How did this idea evolve from some potluck Iftaars to a more formalized club? Brown Girls Food Club (BGFC): We realized how much of a special place we had created through these dinners and knew it had to be shared with other people in Austin that felt the same lack of connection we did. So after the third dinner, we decided that we should just make an instagram page and call it Brown Girls Food Club — very generic. The four of us are brown girls and we like to eat so we decided that. We had our first official meet up in October, again through instagram. We just made a logo and reached out to people on our own personal accounts and it kind of just spread. It was a lot of word of mouth, friends of friends, and social media. It’s ridiculous how things

One thing we quickly noticed was that we all had some overlap. We

Club social. It was just a fun thing to do since Ramadan is usually very social, but this time we were all stuck indoors.

spot, but right now it’s just like going there on [one’s] own or bringing the food for the next virtual meetup. AM: How do you see the club growing and what are your goals for the group? BGFC: Well because of Covid we’ve definitely evolved beyond Austin. so we’ve had several people not just throughout the US join, but also a few internationally — two people from Australia, one from the UK, and even one from Columbia.

quickly saw that we each literally brought something different to the table, so we immediately saw the benefit of inviting other people — not just South Asian girls or just Muslim girls but all types of women of color who needed that same sense of community [we needed]. So it sort of organically happened. More women saw themselves as being part of the space, and we welcomed that. Prior to Covid, we had been growing event after event and scaled very quickly. It was great to be able to see that even within the term “brown” there was so much diversity. Just having that was a testament of how organically [the club] grew. It shows how one’s passion or natural interest in something — ours being sharing stories and sharing time and eating with each other — just grew into something bigger. AM: How did things change this Ramadan with the pandemic? Ayesha Erkin (AE): We tried to keep having our virtual meetings and through social media tried to share what each of us was doing. We had a live session where we did a Q&amp;A and had people asking us about Ramadan and Eid… For me, I did this thing called “date of the day” where I would stuff things in dates, so every now and then I’d put it on the Brown Girls Food

One of the things we are trying to promote is that we are not just founded for community, but also to give business to minority owned restaurants. A lot of them are suffering, especially now, so what we’ve been doing is having our community doing virtual meetups in which we take away food from minority owned restaurants and then we talk about it. That was one thing we did during ramadan as well. AM: Well, with so many minority owned businesses here in Austin, how do you decide where to go? BGFC: We usually do polls. When it was just the four of us, we put together a google list of all the places we knew. We try and keep it very open and keep lines of communication open to have our community give lots of input as well. When our community was a little bit smaller we had an ongoing WhatsApp conversation. But that got to 30 to 40 people, so that was too much. Now Hala has been spearheading a Slack community where we can connect over all sorts of things, one being that people can recommend different places where they can be eating. Obviously with Covid its been a little bit more challenging. Usually we would use the community input to determine the next meeting

We’ve had people from NYC, DC and currently not all of us are even in Austin. We had talked about making Austin a founding chapter and having ambassadors in other citizens, and that is getting pushed faster than we had anticipated. A lot of people want to have chapters. That’s how we are looking at expanding. But with the cases rising we would continue virtually for now… It has been an organic thing so far so definitely more of a community initiative [as opposed to a non-profit]. AM: What do you want prospective members to know? Hala Daher (HD): I think I would want prospective members to know that we are very open and we are really welcoming and it’s become a friendship among the women who are attending. More than just having dinner with people once a month, I am actually forming friendships with these people and doing things outside of the group. Hamaila Qureshi (HQ): Its important to know that it’s okay to be nervous. Coming to something like this can be nerve wracking, but we all went through that and want to build this community together, so we will be welcoming to anyone who shows up. I’m an introvert. So for me to go to a big group like that is a very difficult experience, but it’s okay. We’ll welcome you with open arms. AE:

We are very inclusive, not

just for brown girls but for anyone who is black or indigenous or person of color. You don’t have to be literally brown. If you are female identifying of color you are welcome to come. It’s a safe space, and a no judgement zone. The whole point and the whole reason that we wanted it to be around food is that even if you don’t know anyone you can have conversations that can start with the food and go from there. It’s extended beyond food and beyond our immediate community. Like we have a channel in our Slack called Justice where we’ve been talking about all that’s going on nationally. We’re just trying to integrate people into our daily lives and make a difference Amber Kazabalsh (AK): We want to make sure that all people of color who identify as women feel comfortable in this space. We have all worked on outside initiatives before Brown Girls Food Club… For me I had started a grassroots effort out in LA for Muslim women professionals, so that type of community I was very hungry for. I would want everyone to know that if you have any interest in just having a simple conversation with someone who has some shared trait with you, you will find that with us. You will find your community and your people. Right now, with the rising number of Covid-19 cases, the Brown Girls Food Club continues virtual meetings. But the same sense of connection and community is running strong. Don’t be shy about joining! For more information about the club, visit their Instagram page @ browngirlsfoodclub. In the meantime, support local businesses by getting takeout from one of the group’s favorite meetup spots thus far. Try Hala’s recommendation, Usta Kababji, Hamaila’s favorite, UZEats, Ayesha’s pick, Himalaya Kosheli, or Amber’s go-to, Sassy’s Vegetarian Soul Food.