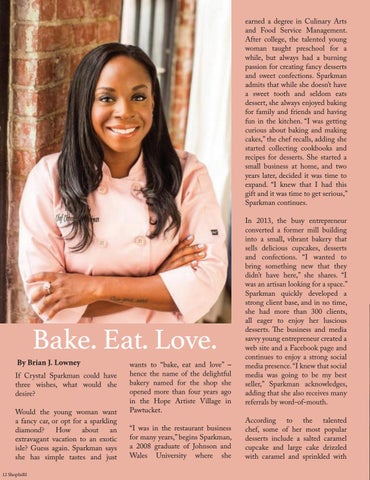 earned a degree in Culinary Arts and Food Service Management. After college, the talented young woman taught preschool for a while, but always had a burning passion for creating fancy desserts and sweet confections. Sparkman admits that while she doesn’t have a sweet tooth and seldom eats dessert, she always enjoyed baking for family and friends and having fun in the kitchen. “I was getting curious about baking and making cakes,” the chef recalls, adding she started collecting cookbooks and recipes for desserts. She started a small business at home, and two years later, decided it was time to expand. “I knew that I had this gift and it was time to get serious,” Sparkman continues.

If Crystal Sparkman could have three wishes, what would she desire? Would the young woman want a fancy car, or opt for a sparkling diamond? How about an extravagant vacation to an exotic isle? Guess again. Sparkman says she has simple tastes and just 12 ShopInRI

wants to “bake, eat and love” – hence the name of the delightful bakery named for the shop she opened more than four years ago in the Hope Artiste Village in Pawtucket. “I was in the restaurant business for many years,” begins Sparkman, a 2008 graduate of Johnson and Wales University where she

In 2013, the busy entrepreneur converted a former mill building into a small, vibrant bakery that sells delicious cupcakes, desserts and confections. “I wanted to bring something new that they didn’t have here,” she shares. “I was an artisan looking for a space.” Sparkman quickly developed a strong client base, and in no time, she had more than 300 clients, all eager to enjoy her luscious desserts. The business and media savvy young entrepreneur created a web site and a Facebook page and continues to enjoy a strong social media presence. “I knew that social media was going to be my best seller,” Sparkman acknowledges, adding that she also receives many referrals by word-of-mouth. According to the talented chef, some of her most popular desserts include a salted caramel cupcake and large cake drizzled with caramel and sprinkled with 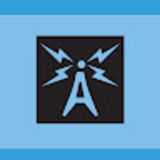