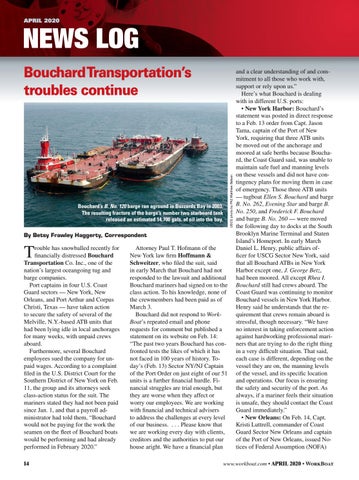 Bouchard’s B. No. 120 barge ran aground in Buzzards Bay in 2003. The resulting fracture of the barge’s number two starboard tank released an estimated 14,700 gals. of oil into the bay. By Betsy Frawley Haggerty, Correspondent

rouble has snowballed recently for financially distressed Bouchard Transportation Co. Inc., one of the nation’s largest oceangoing tug and barge companies. Port captains in four U.S. Coast Guard sectors — New York, New Orleans, and Port Arthur and Corpus Christi, Texas — have taken action to secure the safety of several of the Melville, N.Y.-based ATB units that had been lying idle in local anchorages for many weeks, with unpaid crews aboard. Furthermore, several Bouchard employees sued the company for unpaid wages. According to a complaint filed in the U.S. District Court for the Southern District of New York on Feb. 11, the group and its attorneys seek class-action status for the suit. The mariners stated they had not been paid since Jan. 1, and that a payroll administrator had told them, “Bouchard would not be paying for the work the seamen on the fleet of Bouchard boats would be performing and had already performed in February 2020.” 14

Attorney Paul T. Hofmann of the New York law firm Hoffmann & Schweitzer, who filed the suit, said in early March that Bouchard had not responded to the lawsuit and additional Bouchard mariners had signed on to the class action. To his knowledge, none of the crewmembers had been paid as of March 3. Bouchard did not respond to WorkBoat’s repeated email and phone requests for comment but published a statement on its website on Feb. 14: “The past two years Bouchard has confronted tests the likes of which it has not faced in 100 years of history. Today’s (Feb. 13) Sector NY/NJ Captain of the Port Order on just eight of our 51 units is a further financial hurdle. Financial struggles are trial enough, but they are worse when they affect or worry our employees. We are working with financial and technical advisers to address the challenges at every level of our business.  . . . Please know that we are working every day with clients, creditors and the authorities to put our house aright. We have a financial plan

and a clear understanding of and commitment to all those who work with, support or rely upon us.” Here’s what Bouchard is dealing with in different U.S. ports: • New York Harbor: Bouchard’s statement was posted in direct response to a Feb. 13 order from Capt. Jason Tama, captain of the Port of New York, requiring that three ATB units be moved out of the anchorage and moored at safe berths because Bouchard, the Coast Guard said, was unable to maintain safe fuel and manning levels on these vessels and did not have contingency plans for moving them in case of emergency. Those three ATB units — tugboat Ellen S. Bouchard and barge B. No. 262, Evening Star and barge B. No. 250, and Frederick F. Bouchard and barge B. No. 260 — were moved the following day to docks at the South Brooklyn Marine Terminal and Staten Island’s Homeport. In early March Daniel L. Henry, public affairs officer for USCG Sector New York, said that all Bouchard ATBs in New York Harbor except one, J. George Betz, had been moored. All except Rhea I. Bouchard still had crews aboard. The Coast Guard was continuing to monitor Bouchard vessels in New York Harbor. Henry said he understands that the requirement that crews remain aboard is stressful, though necessary. “We have no interest in taking enforcement action against hardworking professional mariners that are trying to do the right thing in a very difficult situation. That said, each case is different, depending on the vessel they are on, the manning levels of the vessel, and its specific location and operations. Our focus is ensuring the safety and security of the port. As always, if a mariner feels their situation is unsafe, they should contact the Coast Guard immediately.” • New Orleans: On Feb. 14, Capt. Kristi Luttrell, commander of Coast Guard Sector New Orleans and captain of the Port of New Orleans, issued Notices of Federal Assumption (NOFA) 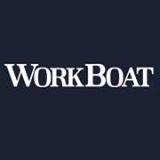