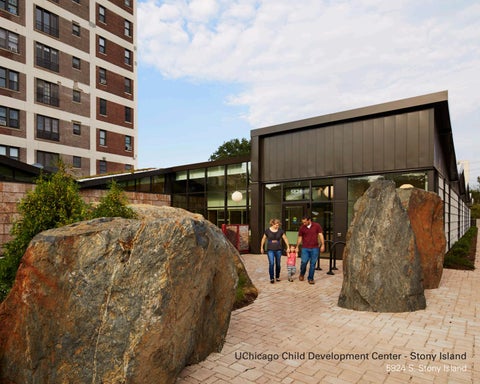 MUSEUM OF SCIENCE AND INDUSTRY

The building, with a z-shaped footprint, responds to the narrow infill site, optimizing sun exposure and leveraging direct connections between the interior and exterior. The siting of the eastern wing, situated within the shadow of the adjacent 19-story residential tower, preserves as much sun for its playcourt as possible.

Conversely, west of the tower, the wing is located to the north so that its playcourt can enjoy a generous exposure to the southern sun. The folding roof ripples over both wings, allowing natural light into the classrooms below. Unlike most green roofs, the one covering the east wing is readily visible from the ground.

Inspired by an adjacent historic landscape, the University of Chicago Childcare Development Center Stony Island integrates the natural environment with its architecture and child-centered curriculum. Instead of creating a place dominated by synthetic play equipment and primary colors, the design allows children to be immersed in the natural world to discover first principles first-hand. Consequently, the design emphasizes the natural landscape over the built-one, centered around two playscapes with a footprint larger than the building itself. The 13,300 square foot facility is more “lookwithin-me” than “look-at-me.” Rather than competing with the size or glamour of the adjacent University buildings, the focus of the center remains on the child’s perspective and outdoor play. Consequently, the richness of experience hugs the ground.

At the facility’s emotional center, formed by the overlap of the two classroom wings, families check-in by using a touch-screen monitor and connect with care providers. From this central location, children get a preview of their day: Fullheight windows reveal the east play court as the natural bark siding extends inside. The adjacent gross motor room, filled with an array of activities, has a wall of glass revealing the west play court. The folding roof ripples over both wings, allowing natural light into the classrooms below. Unlike most green roofs, the one covering the east wing is readily visible from the ground.

Those walking to the center from the south, encounter a six-foot high gabion fence on a berm along the sidewalk, with undulating lifts of white, buff, and dark green colored stones covered in climbing vines. As they turn toward the centerâ&amp;#x20AC;&amp;#x2122;s main doors, huge glacial boulders line the meandering path,

completing a secure, but discreet perimeter for the east playcourt. Instead of appearing as an impenetrable fortress, the center offers up natural textures and scale in a way that keeps security in the background and wondering and learning in the foreground.

This project insists that nature, play, and learning should be seamless - during all four seasons. Childrenâ&amp;#x20AC;&amp;#x2122;s experience here should impart a curiosity for a lifetime of learning, coaxed by a rich range of natural textures, materials, shapes, sizes, events, and challenges. Natural phenomena, typically concealed within buildings, are left in plain view. Sisal rope clad â&amp;#x20AC;&amp;#x153;splash tanksâ&amp;#x20AC;?, located below each roof scupper, allow children to witness rainwater cascading. Wind, so prominent close to the lake, is evidenced in the rustling of the green roof, the swaying branches, and the droplets blowing from the rain chain. Children learn about their senses through interaction and hands-on experiences with nature. The two play courts offer an intentionally designed world of discovery for children. The eastern wing and court provide spaces for infants and toddlers, while the west wing and court are dedicated to

older children. Each age group has a dedicated indoor area with a door to an age-appropriate natural outdoor play area within the court. Low fences subdivide areas of the court allowing younger children to readily observe older children while ensuring the exclusivity of their own environment. If children learn what they live, they will not only learn from nature here, but they will learn to value it. The center is infused with this spirit. Additionally, the curriculum of the center is fully integrated with the mission.

“There are many appealing and original ideas in this building. The highly original use of natural material integrated into exterior play areas includes massive boulders and stone crib walls as security fences and bark as wall cladding. The simple linear plan of the building with its green roofs makes a larger than life gesture out of a relatively small program, reflecting the expansive lakefront park beyond. There is no plastic to be seen, in keeping with the philosophy of the school. The use of ‘real’ ‘materials, not just primary colors extends to the restrained.” - 2014 AIA/CAE Educational Facility Design Excellence Jury 18

Installation of the hydronic tubing for the radiant floors; January 2013

Grading of the East Playcourt; June 2013

Panorama of site at the start of the second day of setting boulders. The 100-ton crane was staged in the East Playcourt; May 2013

Comparison of Energy Usage of U-Chicago Child Development Center Stony Island with that of an ASHRAE 90.1-2007 High Performance Analog. The majority of increased energy savings accrues from the intelligent operation of the building’s ventilation fans.

Comparison of the electrical energy usage of UChicago’s Child Development Center Stony Island with that of an ASHRAE 90 1-2007 High Performance Analog. The greatest savings accrue in winter due to efficient ventilation.

Comparison of the Energy Usage of UChicago’s Stony Island Child Development Center with that of an ASHRAE 90. 1-2007 High Performance Analog. The majority of increased energy savings accrues from the intelligent operation of the building’s ventilation fans.

The exterior wall framing was insulated behind the gypsum sheathing with spray foam to provide an air tight barrier. Furring strips for the exterior cladding, which were fabricated to minimize thermal shorts, were installed over insulating sheathing. A green roof covers the east wing, and a reflective membrane roof covers the west wing.

The amount of secure exterior playspace provided at the UChicago Child Development Center Stony Island exceeds code minimums and NAEYC standards for both staggered and concurrent use of the play courts.

The amount of secure exterior playspace provided at the UChicago Stony Island Child Development Center exceeds code minimums and NAEYC standards for both staggered and concurrent use of the play courts.

its runoff to the Cityâ&amp;#x20AC;&amp;#x2122;s sewers will now only discharge storm water for 11% of the storms occurring during an average two-year period.

Inspired by an adjacent historic landscape, the University of Chicago Childcare Development Center – Stony Island integrates the natural environment with its architecture and child-centered curriculum. 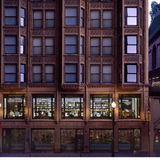