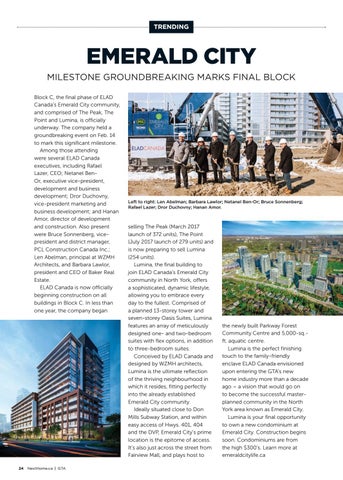 selling The Peak (March 2017 launch of 372 units), The Point (July 2017 launch of 279 units) and is now preparing to sell Lumina (254 units). Lumina, the final building to join ELAD Canada’s Emerald City community in North York, offers a sophisticated, dynamic lifestyle, allowing you to embrace every day to the fullest. Comprised of a planned 13-storey tower and seven-storey Oasis Suites, Lumina features an array of meticulously designed one- and two-bedroom suites with flex options, in addition to three-bedroom suites. Conceived by ELAD Canada and designed by WZMH architects, Lumina is the ultimate reflection of the thriving neighbourhood in which it resides, fitting perfectly into the already established Emerald City community. Ideally situated close to Don Mills Subway Station, and within easy access of Hwys. 401, 404 and the DVP, Emerald City’s prime location is the epitome of access. It’s also just across the street from Fairview Mall, and plays host to

the newly built Parkway Forest Community Centre and 5,000-sq.ft. aquatic centre. Lumina is the perfect finishing touch to the family-friendly enclave ELAD Canada envisioned upon entering the GTA’s new home industry more than a decade ago – a vision that would go on to become the successful masterplanned community in the North York area known as Emerald City. Lumina is your final opportunity to own a new condominium at Emerald City. Construction begins soon. Condominiums are from the high $300’s. Learn more at emeraldcitylife.ca