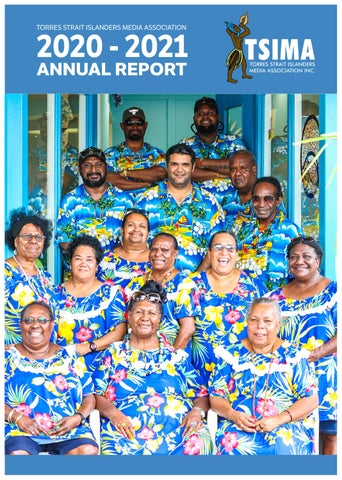 Seu Ngapa, Maiem, and welcome, we are pleased to present the Torres Strait Media Association’s 20202021 Annual Report. TSIMA is proud to report that we have been servicing the people of the Torres Strait in media and communications now for 36 years. We continued to operate with major funding and support from the Torres Strait Regional Authority along with other key stakeholders like Community Broadcasting Australia, CEQ, Tagai State College, Queensland Health, My Pathways, TAFE North Qld and Skytrans, Torres Health, Arts Qld, Mura Kosker Sorority and First Nations Media Australia. In 2020-2021 TSIMA’s Celebrated its 35 years in operation, Continued our Remote Indigenous Broadcast Training Program, Launched our Radio Documentary series and hosted the Reconciliation week here on Thursday Island. We continued to strive to support and involve the community by hosting several outside broadcasts at community events and having a presence at annual cultural gatherings, however due to COVID 19 some activities where rescheduled. Our regular programmes continued to provide information community announcements, promotion of activities and communicate the latest news, views and issues of the region. During this COVID time we remained broadcasting throughout the network provide the essential service to the community. We continued our commitment to leading in sound management and best practice for our growth and development as a service organisation. The Remote Indigenous Broadcasting Service (RIBS) operated from Warraber and Erub while training continued with identified members from communities Iama, Poruma and St Pauls certificate 3 with some delay

due to COVID. TSIMA Staff continued their development work in alignment with the strategic plans goals and objectives. The organisation was represented at the national media gathering, Converge in May 2021 hosted by First Nations Media Australia and Koori Mail in Lismore NSW. TSIMA with a small grant hosted the Reconciliation week program and this included comedy night, public art workshops, lunch time performances, Torres Strait Flag March and Morning Tea and Mabo day music event at TRAWQ hall. We continue to be part of strengthening the First Nations Media Australia network. So on behalf of the board we would like to thank all the staff within the organisation for your contribution and commitment to the broadcasting and media industry here in the Torres Strait Region. The TSIMA Board also was strong with the consistent members with the only change being Jack Kepa as Vice Chairperson stepping down and Ina Apuita taking on the role. In these uncertain times it is vital that the good work of TSIMA continues and we expand to greater opportunities and partnerships for growth. I would like to take this opportunity to thank all my other fellow board members for your passion dedication and commitment to supporting our voice through media in our community. Your ongoing support throughout the year was invaluable. Koeyma Eso, Ivy Trevallion President

Our measures of success • We will measure our success through the following performance indicators: • Growth in program outputs across the week • Growth in social media engagement

Integrity – We are honest, accountable and truthful in everything we do Transparency – We are clear and open in our communication Creativity – We engage our community and nurture creativity Partnership – We work with partners to deliver our services and expand our reach Our goals We will achieve our mission by delivering on the following four goals: • • • •

TSIMA has achieved another year of growing our services and creating opportunities for community, storytelling and raising the awareness about the important contribution that our Indigenous media plays in our lives because our media matters.

The Broadcasting Program This year has been a busy and interesting year for the 4MW crew who responded to a lot of need regarding the COVID 19 Pandemic, information on vaccinations and community safety information, particularly in the vaccination role out in May 2021.

The TSIMA AGM was held on Saturday 20 February 2021, and we continued to strive to improve operations, and the functions of the board of management. Board Meetings were bi-monthly throughout this period. BOARD: • Ivy Trevallion- President • Ina Apuita- Vice President • Yuriko Nakachi - Tresuarer

RCS – ZETTA Play Radio systen was installed and staff where busy training in this new technology, we received additional funding from TSRA for this upgrade along with additional IT infrastructure upgrades. Scheduled Programs continued with TSIMA giving the opportunity to use the airwaves to talk about a number of issues including Health, Education, Politics, Community and Sporting Events, Government and Non-Government. RADIO Documentary Series Project Community broadcasting fund was launched on in this year featuring Jen Enosa Rising Sea levels theme, (Late) Janelle Gebadi on Arts and Culture and Sylvia Tabua on Leadership and Anthony Gea Gea Emerging Artists.

RIBS has taken a long time but we are finally getting there with some progress with sorting technical issues out to bringing more RIBS stations online. There is an ongoing issue of with high rental space again that has plagued the RIBS network budget. TSIMA’s partnership with TAFE FNQ Certificate three in Radio and Screen and Media continued however due to COVID the last block was unable to be completed in late 2020. Niki Mackie from Poruma Island , Flora Taylor from St Pauls Community are part of this training as students along with other community members who will go on to operate RIBS program in their respective communities. St Pauls and Poruma and Iama RIBS have been to focus for training for operators and resolve the technical issues to begin broadcasting. Raina Kepa a former BRACS broadcaster re-engaged at Iama and rejoined the RIBS Broadcasters team. The Remote Broadcasting Service operated in their respective communities of Erub as a daily morning service from 8.30-12.30 Monday to Friday. Warraber broadcasted from 2pm-4pm daily in the afternoon. On the main TSIMA network each operating RIBS contributed to 1 hour per week. Evan Wyatt our Broadcasting technician continued to provided services to the RIBS network and TSIMA. TSIMA Still hold the licences to Mabuyag and Badu Island however space and equipment are still a long term issue to resolve. All up we have 7 Licences. Erub, Warraber, Iama, Poruma, Mabuyag, Badu and St Pauls (only acquired in 2019-2020). RIBS Project Officer and Operations manager took a community visit to Erub Island on 17 October 2020 to support RIBS Broadcaster Walter Lui and meet and recruit Nixon Mye to encourage as a future Broadcaster.

TSIMA FILMS We launched film making at TSIMA this year and staff undertook several workshop intensives and skills development in August 2020 with Alex Smee as trainer. 35 YEARS ON – TSIMA CELEBRATED On 9 December 2020 we celebrated 35 years of TSIMA and we also Launch TSIMA Music and Jack Bani EP Rising as one. Jack recorded his music many years prior and finally was able to release the music to the community. Jen Enosa our long time Senior Producer and Broadcaster also celebrated 30 years at TSIMA and we celebrated this amazing achievement during our celebrations. FIRST NATION MEDIA AUSTRALIA - CONVERGE CONFERENCE In May 2021 TSIMA took part in taking a delegation to Converge in Lismore Hosted by First Nations Media and Koori Mail. Luke Mosby, Nixon Mye, Diat Alferink, Sylvia Tabua and Ivy Trevallion represented the organisation at this time. Jen Enosa Also attended as FNMA Representative. Established a partnership with Australian Film and Television and Radio School (AFTRS) at converge with Director of First Nations and Outreach, Dr Romaine Moreton TSIMA MUSIC Bua Benjamin Mabo Music project was finally completed and the Album Totemic Fire Launch took place in on Saturday 28 August 2020 as part of a Outside Broadcast series. Local Band Black Paradise and Bob Kaigey took part also. COVID SUPPORT SERVICES TSIMA started continued the weekly updates on air with the Torres Strait local disaster management team and this was received well with community in keeping them up to date of the COVID Situation. Volunteers on the religious program on a Sunday’s continued to support community spiritually throughout this time.

RECONCILIATION WEEK HIGHLIGHTS 2020 - 2021 RECONCILIATION WEEK Reconciliation Week 27 May to 3 June Theme ‘More than a Word’ was hosted by TSIMA with a small grant from DATSIP. The program was run throughout the week and included music, morning tea for the flag raising, public art workshops on the Esplanade with Joey Laifoo and Mona Ahwang and School children. A Comedy night called Clud Gussore took place at the bowls club with local and interstate comedians and the week ended with a Mabo evening concert on the 3 June with Joey Tapau, Rochelle Pit, Margaret Gabey supported by a house band

For local comedians to sharpen their content and stage skills. 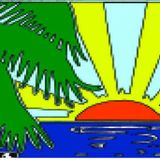 More from The Torres News