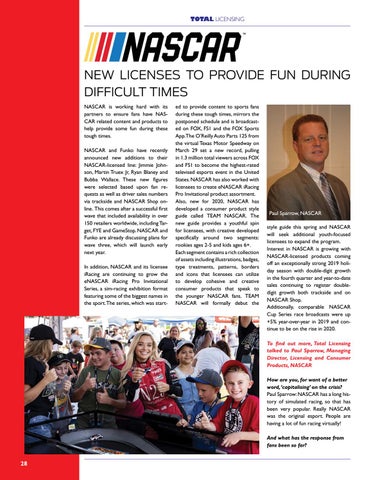 NEW LICENSES TO PROVIDE FUN DURING DIFFICULT TIMES NASCAR is working hard with its partners to ensure fans have NASCAR related content and products to help provide some fun during these tough times.   NASCAR and Funko have recently announced new additions to their NASCAR-licensed line: Jimmie Johnson, Martin Truex Jr, Ryan Blaney and Bubba Wallace. These new figures were selected based upon fan requests as well as driver sales numbers via trackside and NASCAR Shop online. This comes after a successful first wave that included availability in over 150 retailers worldwide, including Target, FYE and GameStop. NASCAR and Funko are already discussing plans for wave three, which will launch early next year.   In addition, NASCAR and its licensee iRacing are continuing to grow the eNASCAR iRacing Pro Invitational Series, a sim-racing exhibition format featuring some of the biggest names in the sport. The series, which was start-

ed to provide content to sports fans during these tough times, mirrors the postponed schedule and is broadcasted on FOX, FS1 and the FOX Sports App.The O’Reilly Auto Parts 125 from the virtual Texas Motor Speedway on March 29 set a new record, pulling in 1.3 million total viewers across FOX and FS1 to become the highest-rated televised esports event in the United States. NASCAR has also worked with licensees to create eNASCAR iRacing Pro Invitational product assortment. Also, new for 2020, NASCAR has developed a consumer product style guide called TEAM NASCAR. The new guide provides a youthful spin for licensees, with creative developed specifically around two segments: rookies ages 2-5 and kids ages 6+. Each segment contains a rich collection of assets including illustrations, badges, type treatments, patterns, borders and icons that licensees can utilize to develop cohesive and creative consumer products that speak to the younger NASCAR fans. TEAM NASCAR will formally debut the

Paul Sparrow, NASCAR style guide this spring and NASCAR will seek additional youth-focused licensees to expand the program. Interest in NASCAR is growing with NASCAR-licensed products coming off an exceptionally strong 2019 holiday season with double-digit growth in the fourth quarter and year-to-date sales continuing to register doubledigit growth both trackside and on NASCAR Shop. Additionally, comparable NASCAR Cup Series race broadcasts were up +5% year-over-year in 2019 and continue to be on the rise in 2020. To find out more, Total Licensing talked to Paul Sparrow, Managing Director, Licensing and Consumer Products, NASCAR How are you, for want of a better word, ‘capitalising’ on the crisis? Paul Sparrow: NASCAR has a long history of simulated racing, so that has been very popular. Really NASCAR was the original esport. People are having a lot of fun racing virtually! And what has the response from fans been so far? 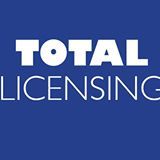