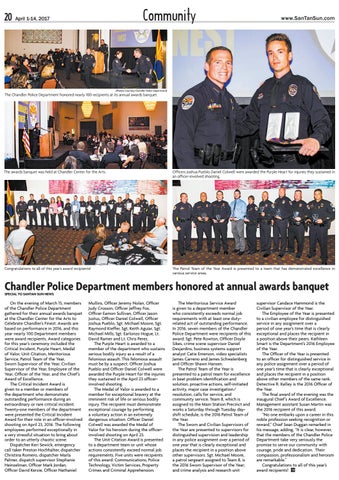 The awards banquet was held at Chandler Center for the Arts.

Officers Joshua Pueblo Daniel Colwell were awarded the Purple Heart for injuries they sustained in an officer-involved shooting.

Congratulations to all of this year’s award recipients!

The Patrol Team of the Year Award is presented to a team that has demonstrated excellence in various service areas.

On the evening of March 15, members of the Chandler Police Department gathered for their annual awards banquet at the Chandler Center for the Arts to Celebrate Chandler’s Finest. Awards are based on performance in 2016, and this year nearly 100 Department members were award recipients. Award categories for this year’s ceremony included the Critical Incident, Purple Heart, Medal of Valor, Unit Citation, Meritorious Service, Patrol Team of the Year, Sworn Supervisor of the Year, Civilian Supervisor of the Year, Employee of the Year, Officer of the Year, and the Chief’s Award of Excellence. The Critical Incident Award is given to a member or members of the department who demonstrate outstanding performance during an extraordinary or rare critical incident. Twenty-one members of the department were presented the Critical Incident Award for their role in an officer-involved shooting on April 23, 2016. The following employees performed exceptionally in a very stressful situation to bring about order to an utterly chaotic scene: Dispatcher Keri Sewick, emergency call taker Preston Hochhalter, dispatcher Christina Romero, dispatcher Marla Palmer, dispatch supervisor Stephanie Heinzelman, Officer Mark Jordan, Officer David Kerzie, Officer Nathaniel

Mullins, Officer Jeremy Nolan, Officer Judy Crosson, Officer Jeffrey Fox, Officer Eamon Sullivan, Officer Jason Justus, Officer Daniel Colwell, Officer Joshua Pueblo, Sgt. Michael Moore, Sgt. Raymond Kieffer, Sgt, Keith Aguiar, Sgt. Michael Mills, Sgt. Earlonzo Hogue, Lt. David Ramer and Lt. Chris Perez. The Purple Heart is awarded to a member of the department who sustains serious bodily injury as a result of a felonious assault. This felonious assault must be by a suspect. Officer Joshua Pueblo and Officer Daniel Colwell were awarded the Purple Heart for the injuries they sustained in the April 23 officerinvolved shooting. The Medal of Valor is awarded to a member for exceptional bravery at the imminent risk of life or serious bodily injury. The recipient must demonstrate exceptional courage by performing a voluntary action in an extremely dangerous situation. Officer Daniel Colwell was awarded the Medal of Valor for his heroism during the officerinvolved shooting on April 23. The Unit Citation Award is presented to a department team or unit whose actions consistently exceed normal job requirements. Five units were recipients of this award: Communications, Police Technology, Victim Services, Property Crimes and Criminal Apprehension.

The Meritorious Service Award is given to a department member who consistently exceeds normal job requirements with at least one dutyrelated act of outstanding performance. In 2016, seven members of the Chandler Police Department were recipients of this award: Sgt. Pete Rowton, Officer Doyle Sikes, crime scene supervisor Daniel Desjardins, business systems support analyst Catie Emerson, video specialists James Carreno and James Schwalenberg and Officer Shawn Hansen. The Patrol Team of the Year is presented to a patrol team for excellence in beat problem identification and solution, proactive actions, self-initiated activity, major case investigation/ resolution, calls for service, and community service. Team 8, which is assigned to the Main Station Precinct and works a Saturday through Tuesday dayshift schedule, is the 2016 Patrol Team of the Year. The Sworn and Civilian Supervisors of the Year are presented to supervisors for distinguished supervision and leadership in any police assignment over a period of one year that is clearly exceptional and places the recipient in a position above other supervisors. Sgt. Michael Moore, a patrol sergeant assigned to Team 8, is the 2016 Sworn Supervisor of the Year; and crime analysis and research unit