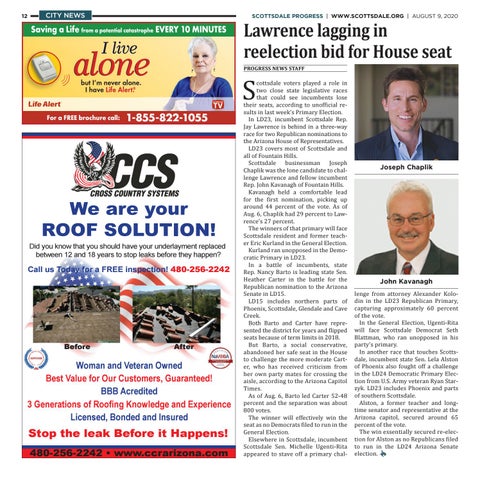 Saving a Life from a potential catastrophe EVERY 10 MINUTES

but I’m never alone. I have Life Alert.® AS SEEN ON

For a FREE brochure call:

We are your ROOF SOLUTION! Did you know that you should have your underlayment replaced between 12 and 18 years to stop leaks before they happen?

cottsdale voters played a role in two close state legislative races that could see incumbents lose their seats, according to unofficial results in last week’s Primary Election. In LD23, incumbent Scottsdale Rep. Jay Lawrence is behind in a three-way race for two Republican nominations to the Arizona House of Representatives. LD23 covers most of Scottsdale and all of Fountain Hills. Scottsdale businessman Joseph Chaplik was the lone candidate to challenge Lawrence and fellow incumbent Rep. John Kavanagh of Fountain Hills. Kavanagh held a comfortable lead for the first nomination, picking up around 44 percent of the vote. As of Aug. 6, Chaplik had 29 percent to Lawrence’s 27 percent. The winners of that primary will face Scottsdale resident and former teacher Eric Kurland in the General Election. Kurland ran unopposed in the Democratic Primary in LD23. In a battle of incumbents, state Rep. Nancy Barto is leading state Sen. Heather Carter in the battle for the Republican nomination to the Arizona Senate in LD15. LD15 includes northern parts of Phoenix, Scottsdale, Glendale and Cave Creek. Both Barto and Carter have represented the district for years and flipped seats because of term limits in 2018. But Barto, a social conservative, abandoned her safe seat in the House to challenge the more moderate Carter, who has received criticism from her own party mates for crossing the aisle, according to the Arizona Capitol Times. As of Aug. 6, Barto led Carter 52-48 percent and the separation was about 800 votes. The winner will effectively win the seat as no Democrats filed to run in the General Election. Elsewhere in Scottsdale, incumbent Scottsdale Sen. Michelle Ugenti-Rita appeared to stave off a primary chal-

John Kavanagh lenge from attorney Alexander Kolodin in the LD23 Republican Primary, capturing approximately 60 percent of the vote. In the General Election, Ugenti-Rita will face Scottsdale Democrat Seth Blattman, who ran unopposed in his party’s primary. In another race that touches Scottsdale, incumbent state Sen. Lela Alston of Phoenix also fought off a challenge in the LD24 Democratic Primary Election from U.S. Army veteran Ryan Starzyk. LD23 includes Phoenix and parts of southern Scottsdale. Alston, a former teacher and longtime senator and representative at the Arizona capitol, secured around 65 percent of the vote. The win essentially secured re-election for Alston as no Republicans filed to run in the LD24 Arizona Senate election.