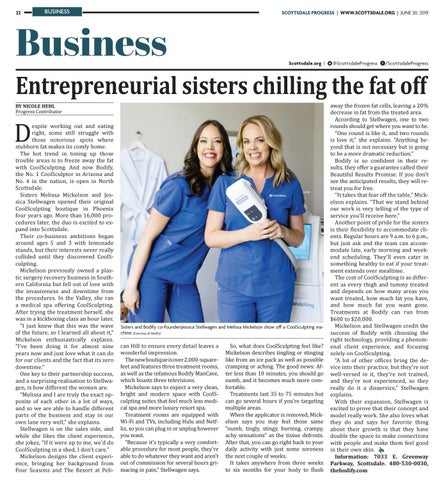 espite working out and eating right, some still struggle with those notorious spots where stubborn fat makes its comfy home. The hot trend in toning up those trouble areas is to freeze away the fat with CoolSculpting. And now Bodify, the No. 1 CoolSculptor in Arizona and No. 4 in the nation, is open in North Scottsdale. Sisters Melissa Mickelson and Jessica Stellwagen opened their original CoolSculpting boutique in Phoenix four years ago. More than 16,000 procedures later, the duo is excited to expand into Scottsdale. Their co-business ambitions began around ages 5 and 3 with lemonade stands, but their interests never really collided until they discovered CoolSculpting. Mickelson previously owned a plastic surgery recovery business in Southern California but fell out of love with the invasiveness and downtime from the procedures. In the Valley, she ran a medical spa offering CoolSculpting. After trying the treatment herself, she was in a kickboxing class an hour later. “I just knew that this was the wave of the future, so I learned all about it,” Mickelson enthusiastically explains. “I’ve been doing it for almost nine years now and just love what it can do for our clients and the fact that its zero downtime.” One key to their partnership success, and a surprising realization to Stellwagen, is how different the women are. “Melissa and I are truly the exact opposite of each other in a lot of ways, and so we are able to handle different parts of the business and stay in our own lane very well,” she explains. Stellwagen is on the sales side, and while she likes the client experience, she jokes, “If it were up to me, we’d do CoolSculpting in a shed, I don’t care.” Mickelson designs the client experience, bringing her background from Four Seasons and The Resort at Peli-

Sisters and Bodify co-foundersJessica Stellwagen and Melissa Mickelson show off a CoolSculpting machine. (Courtesy of Bodify)

can Hill to ensure every detail leaves a wonderful impression. The new boutique is over 2,000-squarefeet and features three treatment rooms, as well as the infamous Bodify ManCave, which boasts three televisions. Mickelson says to expect a very clean, bright and modern space with CoolSculpting suites that feel much less medical spa and more luxury resort spa. Treatment rooms are equipped with Wi-Fi and TVs, including Hulu and Netflix, so you can plug in or unplug however you want. “Because it’s typically a very comfortable procedure for most people, they’re able to do whatever they want and aren’t out of commission for several hours grimacing in pain,” Stellwagen says.

So, what does CoolSculpting feel like? Mickelson describes tingling or stinging like from an ice pack as well as possible cramping or aching. The good news: After less than 10 minutes, you should go numb, and it becomes much more comfortable. Treatments last 35 to 75 minutes but can go several hours if you’re targeting multiple areas. When the applicator is removed, Mickelson says you may feel those same “numb, tingly, stingy, burning, crampy, achy sensations” as the tissue defrosts. After that, you can go right back to your daily activity with just some soreness the next couple of weeks. It takes anywhere from three weeks to six months for your body to �lush

away the frozen fat cells, leaving a 20% decrease in fat from the treated area. According to Stellwagen, one to two rounds should get where you want to be. “One round is like it, and two rounds is love it,” she explains. “Anything beyond that is not necessary but is going to be a more dramatic reduction.” Bodify is so con�ident in their results, they offer a guarantee called their Beautiful Results Promise. If you don’t see the anticipated results, they will retreat you for free. “It takes that fear off the table,” Mickelson explains. “That we stand behind our work is very telling of the type of service you’ll receive here.” Another point of pride for the sisters is their flexibility to accommodate clients. Regular hours are 9 a.m. to 6 p.m., but just ask and the team can accommodate late, early morning and weekend scheduling. They’ll even cater in something healthy to eat if your treatment extends over mealtime. The cost of CoolSculpting is as different as every thigh and tummy treated and depends on how many areas you want treated, how much fat you have, and how much fat you want gone. Treatments at Bodify can run from $600 to $20,000. Mickelson and Stellwagen credit the success of Bodify with choosing the right technology, providing a phenomenal client experience, and focusing solely on CoolSculpting. “A lot of other offices bring the device into their practice, but they’re not well-versed in it, they’re not trained, and they’re not experienced, so they really do it a disservice,” Stellwagen explains. With their expansion, Stellwagen is excited to prove that their concept and model really work. She also loves what they do and says her favorite thing about their growth is that they have double the space to make connections with people and make them feel good in their own skin. Information: 7033 E. Greenway Parkway, Scottsdale. 480-530-0030, thebodify.com