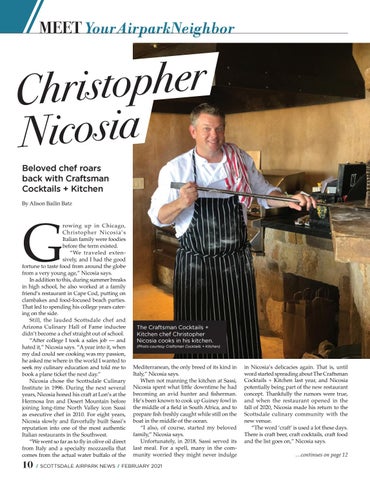 By Alison Bailin Batz rowing up in Chicago, Christopher Nicosia’s Italian family were foodies before the term existed. “We traveled extensively, and I had the good fortune to taste food from around the globe from a very young age,” Nicosia says. In addition to this, during summer breaks in high school, he also worked at a family friend’s restaurant in Cape Cod, putting on clambakes and food-focused beach parties. That led to spending his college years catering on the side. Still, the lauded Scottsdale chef and Arizona Culinary Hall of Fame inductee didn’t become a chef straight out of school. “After college I took a sales job — and hated it,” Nicosia says. “A year into it, when my dad could see cooking was my passion, he asked me where in the world I wanted to seek my culinary education and told me to book a plane ticket the next day.” Nicosia chose the Scottsdale Culinary Institute in 1996. During the next several years, Nicosia honed his craft at Lon’s at the Hermosa Inn and Desert Mountain before joining long-time North Valley icon Sassi as executive chef in 2010. For eight years, Nicosia slowly and ﬂavorfully built Sassi’s reputation into one of the most authentic Italian restaurants in the Southwest. “We went so far as to ﬂy in olive oil direct from Italy and a specialty mozzarella that comes from the actual water buﬀalo of the

Mediterranean, the only breed of its kind in Italy,” Nicosia says. When not manning the kitchen at Sassi, Nicosia spent what little downtime he had becoming an avid hunter and ﬁsherman. He’s been known to cook up Guiney fowl in the middle of a ﬁeld in South Africa, and to prepare ﬁsh freshly caught while still on the boat in the middle of the ocean. “I also, of course, started my beloved family,” Nicosia says. Unfortunately, in 2018, Sassi served its last meal. For a spell, many in the community worried they might never indulge

in Nicosia’s delicacies again. That is, until word started spreading about The Craftsman Cocktails + Kitchen last year, and Nicosia potentially being part of the new restaurant concept. Thankfully the rumors were true, and when the restaurant opened in the fall of 2020, Nicosia made his return to the Scottsdale culinary community with the new venue. “The word ‘craft’ is used a lot these days. There is craft beer, craft cocktails, craft food and the list goes on,” Nicosia says. …continues on page 12