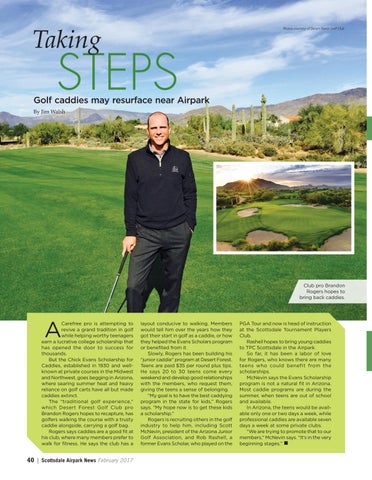 Golf caddies may resurface near Airpark By Jim Walsh

Carefree pro is attempting to revive a grand tradition in golf while helping worthy teenagers earn a lucrative college scholarship that has opened the door to success for thousands. But the Chick Evans Scholarship for Caddies, established in 1930 and wellknown at private courses in the Midwest and Northwest, goes begging in Arizona, where searing summer heat and heavy reliance on golf carts have all but made caddies extinct. The “traditional golf experience,” which Desert Forest Golf Club pro Brandon Rogers hopes to recapture, has golfers walking the course with a trusty caddie alongside, carrying a golf bag. Rogers says caddies are a good fit at his club, where many members prefer to walk for fitness. He says the club has a

layout conducive to walking. Members would tell him over the years how they got their start in golf as a caddie, or how they helped the Evans Scholars program or benefited from it. Slowly, Rogers has been building his “junior caddie” program at Desert Forest. Teens are paid $35 per round plus tips. He says 20 to 30 teens come every weekend and develop good relationships with the members, who request them, giving the teens a sense of belonging. “My goal is to have the best caddying program in the state for kids,” Rogers says. “My hope now is to get these kids a scholarship.” Rogers is recruiting others in the golf industry to help him, including Scott McNevin, president of the Arizona Junior Golf Association, and Rob Rashell, a former Evans Scholar, who played on the

PGA Tour and now is head of instruction at the Scottsdale Tournament Players Club. Rashell hopes to bring young caddies to TPC Scottsdale in the Airpark. So far, it has been a labor of love for Rogers, who knows there are many teens who could benefit from the scholarships. McNevin says the Evans Scholarship program is not a natural fit in Arizona. Most caddie programs are during the summer, when teens are out of school and available. In Arizona, the teens would be available only one or two days a week, while professional caddies are available seven days a week at some private clubs. “We are trying to promote that to our members,” McNevin says. “It’s in the very beginning stages.” 