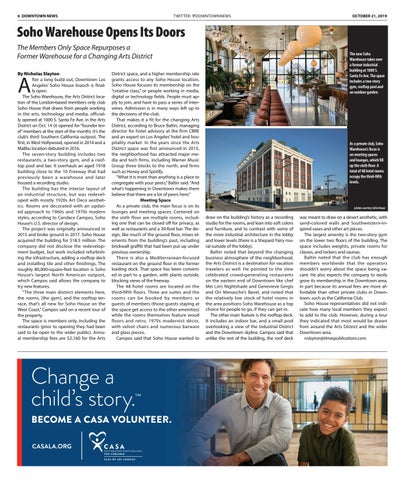 Soho Warehouse Opens Its Doors The Members Only Space Repurposes a Former Warehouse for a Changing Arts District By Nicholas Slayton fter a long build out, Downtown Los Angeles’ Soho House branch is finally open. The Soho Warehouse, the Arts District location of the London-based members only club Soho House that draws from people working in the arts, technology and media, officially opened at 1000 S. Santa Fe Ave. in the Arts District on Oct. 14 (it opened for “founder level” members at the start of the month). It’s the club’s third Southern California outpost. The first, in West Hollywood, opened in 2014 and a Malibu location debuted in 2016. The seven-story building includes two restaurants, a two-story gym, and a rooftop pool and bar. It overhauls an aged 1918 building close to the 10 Freeway that had previously been a warehouse and later housed a recording studio. The building has the interior layout of an industrial structure, but was redeveloped with mostly 1920s Art Deco aesthetics. Rooms are decorated with an updated approach to 1960s and 1970s modern styles, according to Candace Campos, Soho House’s U.S. director of design. The project was originally announced in 2015 and broke ground in 2017. Soho House acquired the building for $18.5 million. The company did not disclose the redevelopment budget, but work included refurbishing the infrastructure, adding a rooftop deck and installing tile and other finishings. The roughly 80,000-square-feet location is Soho House’s largest North American outpost, which Campos said allows the company to try new features. “The three main distinct elements here, the rooms, [the gym], and the rooftop terrace, that’s all new for Soho House on the West Coast,” Campos said on a recent tour of the property. The space is members only, including the restaurants (prior to opening they had been said to be open to the wider public). Annual membership fees are $2,160 for the Arts

District space, and a higher membership rate grants access to any Soho House location. Soho House focuses its membership on the “creative class,” or people working in media, digital or technology fields. People must apply to join, and have to pass a series of interviews. Admission is in many ways left up to the decisions of the club. That makes it a fit for the changing Arts District, according to Bruce Baltin, managing director for hotel advisory at the firm CBRE and an expert on Los Angeles’ hotel and hospitality market. In the years since the Arts District space was first announced in 2015, the neighborhood has attracted major media and tech firms, including Warner Music Group three blocks to the north, and firms such as Honey and Spotify. “What it is more than anything is a place to congregate with your peers,” Baltin said. “And what’s happening in Downtown makes them believe that there are a lot of peers here.” Meeting Space As a private club, the main focus is on its lounges and meeting spaces. Centered on the sixth floor are multiple rooms, including one that can be closed off for privacy, as well as restaurants and a 30-foot bar. The design, like much of the ground floor, mixes elements from the building’s past, including brickwall graffiti that had been put up under previous ownership. There is also a Mediterranean-focused restaurant on the ground floor in the former loading dock. That space has been converted in part to a garden, with plants outside, blocking views of the freeway. The 48 hotel rooms are located on the third-fifth floors. Three are suites and the rooms can be booked by members or guests of members (those guests staying at the space get access to the other amenities) while the rooms themselves feature wood floors and retro, 1970s modernist décor, with velvet chairs and numerous barware and glass pieces. Campos said that Soho House wanted to

As a private club, Soho Warehouse’s focus is on meeting spaces and lounges, which fill up the sixth floor. A total of 48 hotel rooms occupy the third-fifth levels.

draw on the building’s history as a recording studio for the rooms, and lean into soft colors and furniture, and to contrast with some of the more industrial architecture in the lobby and lower levels (there is a Shepard Fairy mural outside of the lobby). Baltin noted that beyond the changing business atmosphere of the neighborhood, the Arts District is a destination for vacation travelers as well. He pointed to the slew celebrated crowd-generating restaurants on the eastern end of Downtown like chef Mei Lin’s Nightshade and Genevieve Gergis and Ori Menasche’s Bavel, and noted that the relatively low stock of hotel rooms in the area positions Soho Warehouse as a top choice for people to go, if they can get in. The other main feature is the rooftop deck. It includes an indoor bar, and a small pool overlooking a view of the Industrial District and the Downtown skyline. Campos said that unlike the rest of the building, the roof deck

was meant to draw on a desert aesthetic, with sand-colored walls and Southwestern-inspired vases and other art pieces. The largest amenity is the two-story gym on the lower two floors of the building. The space includes weights, private rooms for classes, and lockers and saunas. Baltin noted that the club has enough members worldwide that the operators shouldn’t worry about the space being vacant. He also expects the company to easily grow its membership in the Downtown area, in part because its annual fees are more affordable than other private clubs in Downtown, such as the California Club. Soho House representatives did not indicate how many local members they expect to add to the club. However, during a tour they indicated that most would be drawn from around the Arts District and the wider Downtown area. nslayton@timespublications.com.