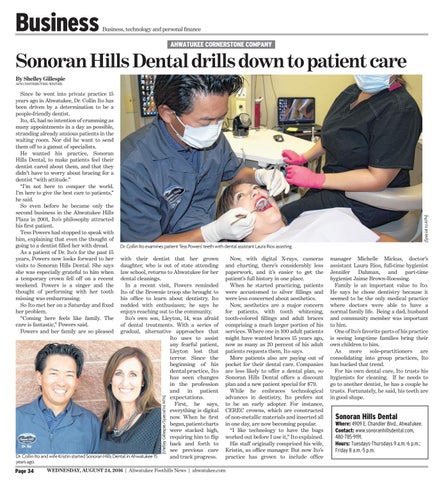 Sonoran Hills Dental drills down to patient care By Shelley Gillespie Since he went into private practice 15 years ago in Ahwatukee, Dr. Collin Ito has been driven by a determination to be a people-friendly dentist. Ito, 45, had no intention of cramming as many appointments in a day as possible, stranding already anxious patients in the waiting room. Nor did he want to send them off to a gamut of specialists. He wanted his practice, Sonoran Hills Dental, to make patients feel their dentist cared about them, and that they didn’t have to worry about bracing for a dentist “with attitude.” “I’m not here to conquer the world. I’m here to give the best care to patients,” he said. So even before he became only the second business in the Ahwatukee Hills Plaza in 2001, Ito’s philosophy attracted his first patient. Tess Powers had stopped to speak with him, explaining that even the thought of going to a dentist filled her with dread. As a patient of Dr. Ito’s for the past 15 years, Powers now looks forward to her visits to Sonoran Hills Dental. She says she was especially grateful to him when a temporary crown fell off on a recent weekend. Powers is a singer and the thought of performing with her tooth missing was embarrassing. So Ito met her on a Saturday and fixed her problem. “Coming here feels like family. The care is fantastic,” Powers said. Powers and her family are so pleased

with their dentist that her grown daughter, who is out of state attending law school, returns to Ahwatukee for her dental cleanings. In a recent visit, Powers reminded Ito of the Brownie troop she brought to his office to learn about dentistry. Ito nodded with enthusiasm; he says he enjoys reaching out to the community. Ito’s own son, Lleyton, 14, was afraid of dental treatments. With a series of gradual, alternative approaches that Ito uses to assist any fearful patient, Lleyton lost that terror. Since the beginning of his dental practice, Ito has seen changes in the profession and in patient expectations. First, he says, everything is digital now. When he first began, patient charts were stacked high, requiring him to flip back and forth to see previous care Dr. Collin Ito and wife Kristin started Sonoran Hills Dental in Ahwatukee 15 and track progress. years ago.

Now, with digital X-rays, cameras and charting, there’s considerably less paperwork, and it’s easier to get the patient’s full history in one place. When he started practicing, patients were accustomed to silver fillings and were less concerned about aesthetics. Now, aesthetics are a major concern for patients, with tooth whitening, tooth-colored fillings and adult braces comprising a much larger portion of his services. Where one in 100 adult patients might have wanted braces 15 years ago, now as many as 20 percent of his adult patients requests them, Ito says. More patients also are paying out of pocket for their dental care. Companies are less likely to offer a dental plan, so Sonoran Hills Dental offers a discount plan and a new patient special for $79. While he embraces technological advances in dentistry, Ito prefers not to be an early adopter. For instance, CEREC crowns, which are constructed of non-metallic materials and inserted all in one day, are now becoming popular. “I like technology to have the bugs worked out before I use it,” Ito explained. His staff originally comprised his wife, Kristin, as office manager. But now Ito’s practice has grown to include office

manager Michelle Mickus, doctor’s assistant Laura Rios, full-time hygienist Jennifer Dahman, and part-time hygienist Jaime Brown-Roessing. Family is an important value to Ito. He says he chose dentistry because it seemed to be the only medical practice where doctors were able to have a normal family life. Being a dad, husband and community member was important to him. One of Ito’s favorite parts of his practice is seeing long-time families bring their own children to him. As more sole-practitioners are consolidating into group practices, Ito has bucked that trend. For his own dental care, Ito trusts his hygienists for cleaning. If he needs to go to another dentist, he has a couple he trusts. Fortunately, he said, his teeth are in good shape.