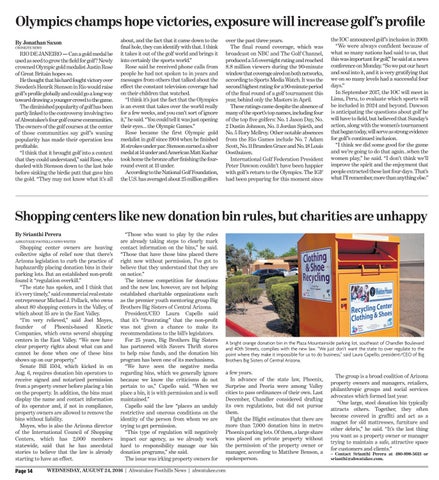 RIO DE JANEIRO — Can a gold medal be used as seed to grow the field for golf? Newly crowned Olympic gold medalist Justin Rose of Great Britain hopes so. He thought that his hard fought victory over Sweden’s Henrik Stenson in Rio would raise golf’s profile globally and could go a long way toward drawing a younger crowd to the game. The diminished popularity of golf has been partly linked to the controversy involving two of Ahwatukee’s four golf course communities. The owners of the golf courses at the center of those communities say golf’s waning popularity has made their operation less profitable. “I think that it brought golf into a context that they could understand,” said Rose, who dueled with Stenson down to the last hole before sinking the birdie putt that gave him the gold. “They may not know what it’s all

over the past three years. The final round coverage, which was broadcast on NBC and The Golf Channel, produced a 5.6 overnight rating and reached 8.8 million viewers during the 90-minute window that coverage aired on both networks, according to Sports Media Watch. It was the second highest rating for a 90-minute period of the final round of a golf tournament this year, behind only the Masters in April. These ratings came despite the absence of many of the sport’s top names, including four of the top five golfers: No. 1 Jason Day, No. 2 Dustin Johnson, No. 3 Jordan Spieth, and No. 5 Rory Mcllroy. Other notable absences from the Rio Games include No. 7 Adam Scott, No. 11 Branden Grace and No. 18 Louis Oosthuizen. International Golf Federation President Peter Dawson couldn’t have been happier with golf’s return to the Olympics. The IGF had been preparing for this moment since

about, and the fact that it came down to the final hole, they can identify with that. I think it takes it out of the golf world and brings it into certainly the sports world.” Rose said he received phone calls from people he had not spoken to in years and messages from others that talked about the effect the constant television coverage had on their children that watched. “I think it’s just the fact that the Olympics is an event that takes over the world really for a few weeks, and you can’t sort of ignore it,” he said. “You could tell it was just opening their eyes… the Olympic Games.” Rose became the first Olympic gold medalist in golf since 1904 when he finished 16 strokes under par. Stenson earned a silver medal at 14 under and American Matt Kuchar took home the bronze after finishing the fourround event at 13 under. According to the National Golf Foundation, the U.S. has averaged about 25 million golfers

the IOC announced golf’s inclusion in 2009. “We were always confident because of what so many nations had said to us, that this was important for golf,” he said at a news conference on Monday. “So we put our heart and soul into it, and it is very gratifying that we on so many levels had a successful four days.” In September 2017, the IOC will meet in Lima, Peru, to evaluate which sports will be included in 2024 and beyond. Dawson is anticipating the questions about golf he will have to field, but believed that Sunday’s action, along with the women’s tournament that began today, will serve as strong evidence for golf’s continued inclusion. “I think we did some good for the game and we’re going to do that again…when the women play,” he said. “I don’t think we’ll improve the spirit and the enjoyment that people extracted these last four days. That’s what I’ll remember, more than anything else.”

Shopping center owners are heaving collective sighs of relief now that there’s Arizona legislation to curb the practice of haphazardly placing donation bins in their parking lots. But an established non-profit found it “regulation overkill.” “The state has spoken, and I think that it’s very timely,” said commercial real estate entrepreneur Michael J. Pollack, who owns about 80 shopping centers in the Valley, of which about 35 are in the East Valley. “I’m very relieved,” said Joel Moyes, founder of Phoenix-based Kinetic Companies, which owns several shopping centers in the East Valley. “We now have clear property rights about what can and cannot be done when one of these bins shows up on our property.” Senate Bill 1504, which kicked in on Aug. 6, requires donation bin operators to receive signed and notarized permission from a property owner before placing a bin on the property. In addition, the bins must display the name and contact information of its operator and, if not in compliance, property owners are allowed to remove the bins without liability. Moyes, who is also the Arizona director of the International Council of Shopping Centers, which has 2,000 members statewide, said that he has anecdotal stories to believe that the law is already starting to have an effect. Page 14

“Those who want to play by the rules are already taking steps to clearly mark contact information on the bins,” he said. “Those that have those bins placed there right now without permission, I’ve got to believe that they understand that they are on notice.” The intense competition for donations and the new law, however, are not helping established charitable organizations such as the premier youth mentoring group Big Brothers Big Sisters of Central Arizona. President/CEO Laura Capello said that it’s “frustrating” that the non-profit was not given a chance to make its recommendations to the bill’s legislators. For 25 years, Big Brothers Big Sisters has partnered with Savers Thrift stores to help raise funds, and the donation bin program has been one of its mechanisms. “We have seen the negative media regarding bins, which we generally ignore because we know the criticisms do not pertain to us,” Capello said. “When we place a bin, it is with permission and is well maintained.” Capello said the law “places an unduly restrictive and onerous conditions on the identity of the person from whom we are trying to get permission. “This type of regulation will negatively impact our agency, as we already work hard to responsibility manage our bin donation programs,” she said. The issue was irking property owners for

A bright orange donation bin in the Plaza Mountainside parking lot, southeast of Chandler Boulevard and 40th Streets, complies with the new law. “We just don’t want the state to over regulate to the point where they make it impossible for us to do business,” said Laura Capello, president/CEO of Big Brothers Big Sisters of Central Arizona.

a few years. In advance of the state law, Phoenix, Surprise and Peoria were among Valley cities to pass ordinances of their own. Last December, Chandler considered drafting its own regulations, but did not pursue them. Fight the Blight estimates that there are more than 7,000 donation bins in metro Phoenix parking lots. Of them, a large share was placed on private property without the permission of the property owner or manager, according to Matthew Benson, a spokesperson.

The group is a broad coalition of Arizona property owners and managers, retailers, philanthropic groups and social services advocates which formed last year. “One large, steel donation bin typically attracts others. Together, they often become covered in graffiti and act as a magnet for old mattresses, furniture and other debris,” he said. “It’s the last thing you want as a property owner or manager trying to maintain a safe, attractive space for customers and clients.” – Contact Srianthi Perera at 480-898-5613 or srianthi@ahwatukee.com.