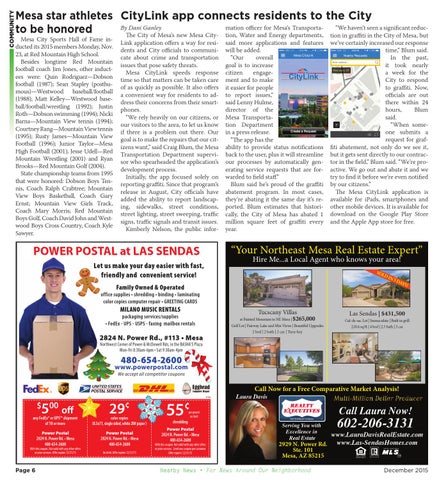 Link application offers a way for residents and City officials to communicate about crime and transportation issues that pose safety threats. Mesa CityLink speeds response time so that matters can be taken care of as quickly as possible. It also offers a convenient way for residents to address their concerns from their smartphones. “We rely heavily on our citizens, or our visitors to the area, to let us know if there is a problem out there. Our goal is to make the repairs that our citizens want,” said Craig Blum, the Mesa Transportation Department supervisor who spearheaded the application’s development process. Initially, the app focused solely on reporting graffiti. Since that program’s release in August, City officials have added the ability to report landscaping, sidewalks, street conditions, street lighting, street sweeping, traffic signs, traffic signals and transit issues. Kimberly Nelson, the public infor-

said more applications and features will be added. “Our overall goal is to increase citizen engagement and to make it easier for people to report issues,” said Lenny Hulme, director of the Mesa Transportation Department in a press release. “The app has the ability to provide status notifications back to the user, plus it will streamline our processes by automatically generating service requests that are forwarded to field staff.” Blum said he’s proud of the graffiti abatement program. In most cases, they’re abating it the same day it’s reported. Blum estimates that historically, the City of Mesa has abated 1 million square feet of graffiti every year.

we’ve certainly increased our response time,” Blum said. In the past, it took nearly a week for the City to respond to graffiti. Now, officials are out there within 24 hours, Blum said. “When someone submits a request for graffiti abatement, not only do we see it, but it gets sent directly to our contractor in the field,” Blum said. “We’re proactive. We go out and abate it and we try to find it before we’re even notified by our citizens.” The Mesa CityLink application is available for iPads, smartphones and other mobile devices. It is available for download on the Google Play Store and the Apple App store for free.

Let us make your day easier with fast, friendly and convenient service!

www.powerpostal.com We accept all competitor coupons

any FedEx® or UPS™ shipment of 10 or more

With this coupon. Not valid with any other offers or prior services. Offer expires 12/31/15

per pound no limit

With this coupon. Not valid with any other offers or prior services. Limit one coupon per customer Offer expires 12/31/15

Nearby News • For News Around Our Neighborhood