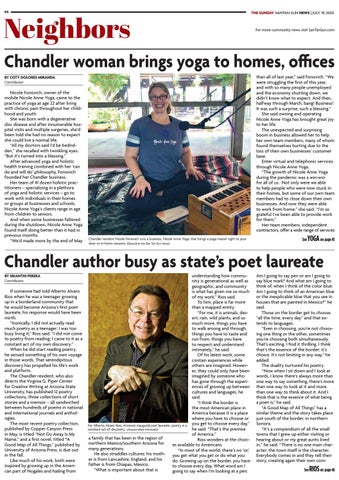 Chandler woman brings yoga to homes, offices than all of last year,” said Fonovich. “We were struggling the first of this year, and with so many people unemployed and the economy shutting down, we didn’t know what to expect. And then, halfway through March, bang! Business! It was such a surprise, such a blessing.” She said owning and operating Nicole Anne Yoga has brought great joy to her life. The unexpected and surprising boom in business allowed her to help her own team members, many of whom found themselves hurting due to the loss of their own businesses’ customer base. Enter virtual and telephonic services through Nicole Anne Yoga. “The growth of Nicole Anne Yoga during the pandemic was a win-win for all of us. Not only were we able to help people who were now stuck in their homes, but some of our own team members had to close down their own businesses. And now they were able to work from home,” she said. “I’m so grateful I’ve been able to provide work for them.” Her team members, independent contractors, offer a wide range of services

Nicole Fonovich, owner of the mobile Nicole Anne Yoga, came to the practice of yoga at age 22 after living with chronic pain throughout her childhood and youth. She was born with a degenerative disc disease and after innumerable hospital visits and multiple surgeries, she’d been told she had no reason to expect she could live a normal life. “All my doctors said I’d be bedridden,” she recalled with twinkling eyes. “But it’s turned into a blessing.” After advanced yoga and holistic health training combined with her ‘can do and will do’ philosophy, Fonovich founded her Chandler business. Her team of 41 dozen holistic practitioners – specializing in a plethora of yoga and holistic services – go to work with individuals in their homes or groups at businesses and schools. Nicole Anne Yoga’s clients range in age from children to seniors. And when some businesses faltered during the shutdown, Nicole Anne Yoga found itself doing better than it had in previous months. “We’d made more by the end of May

If someone had told Alberto Alvaro Rios when he was a teenager growing up in a borderland community that he would become Arizona’s first poet laureate, his response would have been mirth. “Ironically, I did not actually read much poetry as a teenager. I was too busy living it,” Rios said. “I did not come to poetry from reading; I came to it as a constant act of my own discovery.” When he did start reading poetry, he sensed something of his own voyage in those words. That serendipitous discovery has propelled his life’s work and platform. The Chandler resident, who also directs the Virginia G. Piper Center for Creative Writing at Arizona State University, has published 12 poetry collections, three collections of short stories and a memoir – all sandwiched between hundreds of poems in national and international journals and anthologies. The most recent poetry collection, published by Copper Canyon Press in May, is titled “Not Go Away Is My Name,” and a first novel, titled “A Good Map of All Things,” published by University of Arizona Press, is due out in the fall. Like much of his work, both were inspired by growing up in the American part of Nogales and hailing from

understanding how community is generational as well as geographic, and community is what has given me so much of my work,” Rios said. To him, place is far more than a mapped entity. “For me, it is animals, desert, rain, wild plants, and so much more, things you have to walk among and through, things you have to taste and run from, things you have to respect and understand intimately,” he said. Of his latest work, some contain experiences while others are imagined. However, they could only have been imagined by someone who has gone through the experiences of growing up between cultures and languages, he said. “I think the border is the most American place in America because it is a place where you have to choose or For Alberto Alvaro Rios, Arizona’s inaugural poet laureate, poetry is a you get to choose every day,” he said. “That’s the premise constant act of discovery. (Arizona State University) of America.” a family that has been in the region of Rios wonders at the choicnorthern Mexico/southern Arizona for es available to Americans. many generations. “In most of the world, there’s no ‘or,’ He also straddles cultures: his moth- you get what you get or do what you er is from Lancashire, England, and his do. Growing up on the border, you have father is from Chiapas, Mexico. to choose every day. What word am I “What is important about that is going to say when I’m looking at a pen:

Am I going to say pen or am I going to say blue mark? And what am I going to think of, when I think of the color blue: Am I going to think of an American blue or the inexplicable blue that you see in houses that are painted in Mexico?” he said. Those on the border get to choose “all the time, every day” and that extends to languages. “Even in choosing, you’re not choosing one thing or the other, sometimes you’re choosing both simultaneously. That’s exciting. I find it thrilling. I think that’s the essence of the border; it’s choice. It’s not limiting in any way,” he added. The duality nurtured his poetry. “Now when I sit down and I look at words, I know there’s always more than one way to say something, there’s more than one way to look at it and more than one way to think about it. And I think that is the essence of what being a poet is,” he said. “A Good Map of All Things” has a similar theme and the story takes place just south of the border, in northern Sonora. “It’s a compendium of all the small towns that I grew up either visiting or hearing about or my great aunts lived in,” he said. “There is no one main character; the town itself is the character. Everybody comes in and they tell their story, creating again their own comSee