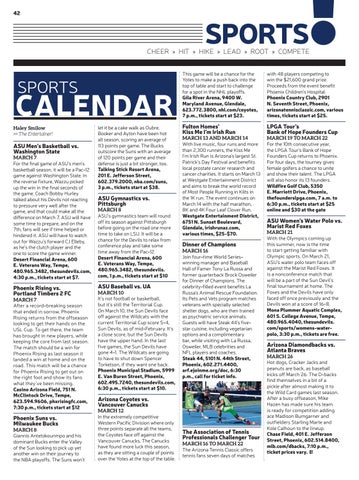 MARCH 7 For the final game of ASU’s men’s basketball season, it will be a Pac-12 game against Washington State. In the reverse fixture, Wazzu picked up the win in the final seconds of the game. Coach Bobby Hurley talked about his Devils not reacting to pressure very well after the game, and that could make all the difference on March 7. ASU will have some time to prepare, and on the 7th, fans will see if time helped or hindered it. ASU will have to watch out for Wazzu’s forward CJ Elleby, as he’s the clutch player and the one to score the game winner. Desert Financial Arena, 600 E. Veterans Way, Tempe, 480.965.3482, thesundevils.com, 4:30 p.m., tickets start at $7.

MARCH 7 After a record-breaking season that ended in sorrow, Phoenix Rising returns from the offseason looking to get their hands on the USL Cup. To get there, the team has brought in new players, while keeping the core from last season. The match should be a win for Phoenix Rising as last season it landed a win at home and on the road. This match will be a chance for Phoenix Rising to get out on the right foot and show its fans what they’ve been missing. Casino Arizona Field, 751 N. McClintock Drive, Tempe, 623.594.9606, phxrisingfc.com, 7:30 p.m., tickets start at $12

MARCH 8 Giannis Antetokounmpo and his dominant Bucks enter the Valley of the Sun looking to pick up yet another win on their journey to the NBA playoffs. The Suns won’t

let it be a cake walk as Oubre, Booker and Ayton have been hot all season, scoring an average of 113 points per game. The Bucks outscore the Suns with an average of 120 points per game and their defense is just a bit stronger, too. Talking Stick Resort Arena, 201 E. Jefferson Street, 602.379.2000, nba.com/suns, 3 p.m., tickets start at $38.

MARCH 8 ASU’s gymnastics team will round off its season against Pittsburgh before going on the road one more time to take on LSU. It will be a chance for the Devils to relax from conference play and take some time away from the Pac-12. Desert Financial Arena, 600 E. Veterans Way, Tempe, 480.965.3482, thesundevils. com, 1 p.m., tickets start at $10

MARCH 13 AND MARCH 14 With live music, four runs and more than 2,300 runners, the Kiss Me I’m Irish Run is Arizona’s largest St. Patrick’s Day Festival and benefits local prostate cancer research and cancer charities. It starts on March 13 at Westgate Entertainment District and aims to break the world record of Most People Running in Kilts in the 1K run. The event continues on March 14 with the half marathon, 8K and 4K Four Leaf Clover Run. Westgate Entertainment District, 6751 N. Sunset Boulevard, Glendale, irishrunaz.com, various times, $25-$70.

MARCH 12 In the extremely competitive Western Pacific Division where only three points separate all the teams, the Coyotes face off against the Vancouver Canucks. The Canucks have found more luck this season, as they are sitting a couple of points over the Yotes at the top of the table.

MARCH 19 TO MARCH 22 For the 10th consecutive year, the LPGA Tour’s Bank of Hope Founders Cup returns to Phoenix. For four days, the tourney gives female golfers a chance to unite and show their talent. The LPGA will also honor its 13 founders. Wildfire Golf Club, 5350 E. Marriott Drive, Phoenix, thefounderslpga.com, 7 a.m. to 6:30 p.m., tickets start at $25 online and $30 at the gate

ASU Women’s Water Polo vs. Marist Red Foxes MARCH 21 With the Olympics coming up this summer, now is the time to start getting familiar with Olympic sports. On March 21, ASU’s water polo team faces off against the Marist Red Foxes. It is a nonconference match that will be a part of the Sun Devil’s final tournament at home. The Foxes and the Devils have only faced off once previously and the Devils won at a score of 16-8. Mona Plummer Aquatic Complex, 601 S. College Avenue, Tempe, 480.965.4040, thesundevils. com/sports/womens-waterpolo, 3:30 p.m., tickets are free.

MARCH 26 Hot dogs, Cracker Jacks and peanuts are back, as baseball kicks off March 26. The D-backs find themselves in a bit of a pickle after almost making it to the Wild Card games last season. After a busy offseason, Mike Hazen has made sure his team is ready for competition adding ace Madison Bumgarner and outfielders Starling Marte and Kole Calhoun to the lineup. Chase Field, 401 E. Jefferson Street, Phoenix, 602.514.8400, mlb.com/dbacks, 7:10 p.m., ticket prices vary.