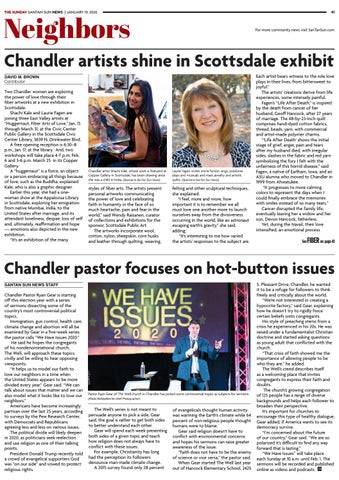 Two Chandler women are exploring the power of love through their fiber artworks at a new exhibition in Scottsdale. Shachi Kale and Laurie Fagen are joining three East Valley artists at “Huggernaut, Fiber Arts of Love,” Jan. 13 through March 31, at the Civic Center Public Gallery in the Scottsdale Civic Center Library, 3839 N. Drinkwater Blvd. A free opening reception is 6:30–8 p.m., Jan. 17, at the library. And, two workshops will take place 4-7 p.m. Feb. 6 and 3-6 p.m. March 25 in its Copper Gallery. A “huggernaut” is a force, an object or a person embracing all things because of love, such as the Buddha, explained Kale, who is also a graphic designer. Earlier this year, she had a onewoman show at the Appaloosa Library in Scottsdale, exploring her emigration from native Mumbai, India, to the United States after marriage, and its attendant loneliness, despair, loss of self and, ultimately, reaffirmation and hope –– emotions also depicted in the new exhibition. “It’s an exhibition of the many

Chandler artist Shachi Kale, whose work is featured at Copper Gallery in Scottsdale, has been drawing since she was a child in India, (Special to SanTan Sun News)

styles of fiber arts. The artists present personal artworks communicating the power of love and celebrating faith in humanity in the face of so much heartache, pain and fear in the world,” said Wendy Raisanen, curator of collections and exhibitions for the sponsor, Scottsdale Public Art The artworks incorporate wool, cotton, nylon, sheepskin, corn husks and leather through quilting, weaving,

felting and other sculptural techniques, she explained. “I feel, more and more, how important it is to remember we all must love one another more to launch ourselves away from the divisiveness occurring in the world, like an astronaut escaping earth’s gravity,” she said, adding: “It’s interesting to me how varied the artists’ responses to the subject are.

Each artist bears witness to the role love plays in their lives, from bittersweet to joyful.” The artists’ creations derive from life experiences, some intensely painful. Fagen’s “Life After Death,” is inspired by the death from cancer of her husband, Geoff Hancock, after 27 years of marriage. The 48-by-23-inch quilt comprises hand-dyed cotton fabrics, thread, beads, yarn, with commercial and artist-made polymer charms. “‘Life After Death’ shows the initial stage of grief, anger, pain and tears after my husband died, with irregular sides, slashes in the fabric and red yarn symbolizing the fury I felt with the unfairness of this horrid disease,” said Fagen, a native of Earlham, Iowa, and an ASU alumna who moved to Chandler in 1999 from Ahwatukee. “It progresses to more calming colors to represent the days when I could finally embrace the memories with smiles instead of so many tears.” Cancer disrupted the family life, eventually leaving her a widow and her son, Devon Hancock, fatherless. Yet, during the travail, their love intensified, an emotional process See

Chandler Pastor Ryan Gear is starting off this election year with a series of sermons dissecting some of the country’s most controversial political topics. Immigration, gun control, health care, climate change and abortion will all be examined by Gear in a five-week series the pastor calls “We Have Issues 2020.” He said he hopes the congregants of his nondenominational church, The Well, will approach these topics civilly and be willing to hear opposing viewpoints. “It helps us to model our faith to love our neighbors in a time when the United States appears to be more divided every year,” Gear said. “We can talk about issues that matter and we can also model what it looks like to love our neighbors.” Americans have become increasingly partisan over the last 25 years, according to surveys by the Pew Research Center, with Democrats and Republicans agreeing less and less on various issues. The political divide will likely deepen in 2020, as politicians seek reelection and use religion as one of their talking points. President Donald Trump recently told a crowd of evangelical supporters God was “on our side” and vowed to protect religious rights.

Pastor Ryan Gear of The Well church in Chandler has picked some controversial topics as subjects for sermons. (Pablo Robles/SanTan Staff Photographer)

The Well’s series is not meant to persuade anyone to pick a side, Gear said, the goal is rather to get both sides to better understand each other. Gear will spend each week presenting both sides of a given topic and teach how religion does not always have to conflict with these issues. For example, Christianity has long had the perception its followers denounce man-made climate change. A 2015 survey found only 28 percent

of evangelicals thought human activity was warming the Earth’s climate while 64 percent of non-religious people thought humans were to blame. Gear said religion doesn’t have to conflict with environmental concerns and hopes his sermons can raise greater awareness of the issue. “Faith does not have to be the enemy of science or vice versa,” the pastor said. When Gear started The Well last year out of Hancock Elementary School, 2425

S. Pleasant Drive, Chandler, he wanted it to be a refuge for followers to think freely and critically about the world. “We’re not interested in creating a hypocrite factory,” said Gear, explaining how he doesn’t try to rigidly force certain beliefs onto congregants. His style of preaching stems from a crisis he experienced in his 20s. He was raised under a fundamentalist Christian doctrine and started asking questions as young adult that conflicted with the church. “That crisis of faith showed me the importance of allowing people to be who they are,” he added. The Well’s creed describes itself as a welcoming place that invites congregants to express their faith and doubts. The church’s growing congregation of 125 people has a range of diverse backgrounds and helps each follower to broaden their perspective. It’s important for churches to encourage this type of healthy dialogue, Gear added, if America wants to see its democracy survive. “I’m concerned about the future of our country,” Gear said. “We are so polarized it’s difficult to find any way forward that is lasting.” “We Have Issues” will take place each Sunday at 10 a.m. until Feb. 1. The sermons will be recorded and published online as videos and podcasts.