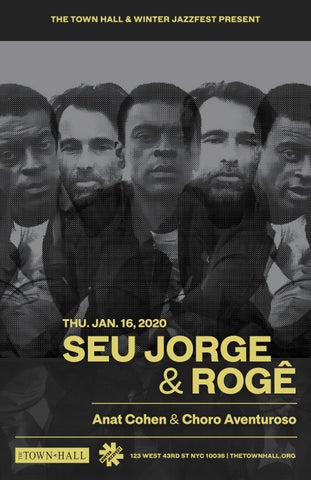 A ThousAnd ThoughTs A Live Documentary by

DjANGO ANOusHkA Fri. May. 8 • 8pm A GO GO sHANkAR Sat. May. 9 • 8pm 2019 STePhAne WRembel Presents a Celebration of Guitar Through the Music of Django Reinhardt

Singer, songwriter, film actor (City of God), and Rio native Seu Jorge is the reigning king of samba-funk: a sound, born in the 1960s, that merges Brazil’s trademark dance rhythm with soul, R&B, hip-hop, and other black pop styles from the U.S. His hits, notably Carolina, Amiga da Minha Mulher (My Woman’s Friend), and Burguesinha (Bourgeois Girl), are as irresistibly danceable as the best of Motown. Later he branched out into bossa nova as well as the songs of David Bowie, which he sang in Portuguese in Wes Anderson’s 2004 film The Life Aquatic with Steve Zissou. Bowie raved about “this new level of beauty which he has imbued them with.” He now stars in the Netflix crime drama Irmandade (Brotherhood). Since 2013, Seu Jorge (pronounced SEH-oo ZHOR-zhe) has lived in Los Angeles. In 2018, so did his friend of 25 years, Rogê, whose swinging sambafunk and onstage charisma have made him a star in the clubs of downtown Rio. Now, to celebrate their acoustic album of originals, Seu Jorge & Rogê: Night Dreamer Direct-to-Disc Sessions, Seu Jorge and Rogê unite in New York at The Town Hall. They will perform songs from the record, (due Feb. 7 on vinyl and digital download on the new U.K.-based Night Dreamer label), along with their signature tunes. The concert also features an Israeli musician with deep ties to Brazil: Anat Cohen, the New York-based, world-renowned clarinet and sax player. Two of Cohen’s Brazilian albums, Rosa dos Ventos and Outra Coisa: The Music of Moacir Santos, earned Grammy nominations and her latest Triple Helix made Jazz Times’ Top 50 of 2019. At The Town Hall she will appear with her Brazilian band, Choro Aventuroso. 3 | @TownHallNYC

SEU JORGE (which means Sir or Mister Jorge) came to international attention not as a singer but as an actor. In City of God (2002), the film about life in Rio’s crime- and drugridden slums (favelas), he played Knockout Ned, a ladies’ man who is targeted and victimized by a murderous drug lord. Seu Jorge is no stranger to that world. He was born Jorge Mário da Silva in a favela in Belford Roxo, one of the poorest towns in the state of Rio; his brother was murdered by police as a teenager. Infatuated with both samba and Stevie Wonder, he spent his youth grooving to “funk carioca,” a socially-conscious dance music that hailed from the favelas. In 1993, after years of working blue-collar survival jobs, he joined an acting company. Homeless at the time, he slept in the theater for four years. His life changed when he and a group of young musicians formed a band, Farofa Carioca. In 1998 they released an album, Moro no Brasil (I Live in Brazil), that combined samba, rap, reggae, and funk carioca to form a magazine-style portrait of their troubled city. The breakout member was Seu Jorge, who quickly went solo. A dozen albums and as many films later, he remains one of Brazil’s biggest stars and most popular musical exports. He has brought his sound to Austin, Sydney, Ottawa, and Montreux; he sang in the closing ceremony of the 2012 Summer Olympics in London.

ROGÊ Around twenty years ago, ROGÊ (pronounced Ho-Zheh)—born Roger José Cury in Rio—began working his way up through the city’s downtown samba-club circuit.

Handsome, young, endlessly energetic, and a born entertainer, he was hailed as an exciting new voice of samba-funk, with the power to lift up audiences and make them want to dance. Many of the samba’s great elder statesmen, such as Rio’s Arlindo Cruz, embraced him; their 2016 duo album, Na Veia (In the Vein), was nominated for a Latin Grammy. Rogê’s many other releases include Baile do Brenguelé, the soundtrack of his 2014 DVD on Warner Music. A song he wrote with Cruz and another samba star, Arlindo Neto, “Os Deuses do Olimpo Visitam o Rio de Janeiro” (The Gods of Olympus Visit Rio de Janeiro), was chosen from among stiff competition to be the theme of the 2016 Olympics, which were held in Rio. For the last several years, Rogê has been building a relationship with the U.S. In 2013 he made his New York debut at Joe’s Pub; the following year he played Summerstage. Now an expatriate, he commutes between North America and Rio. Wherever he is, he says, “I keep representing the culture of our country. I feel very proud to be Brazilian.” @TownHallNYC | 4

ABOUT THE ARTISTS BACKING MUSICIANS:

is one of today’s most in demand drummers and percussionists. Born and raised in Brazil, living in the USA since 1998, his growing and impressive resumé spans a wide range of notable and major recording artists like Grammy Award winners Sergio Mendes, Everlast, Bebel Gilberto, Airto Moreira, Bobby Womack and K.D. Lang, Los Lobos, Will.I.Am, Jamie Foxx, Janelle Monae, and film credits including Rio and Rio 2 as well as appearances on American Idol. Photo courtesy of the artist

Photo courtesy of the artist

born in Salvador, Bahia, the capital of Afro-Brazilian culture. From a young age Gibi was exposed to the rich heritage of capoeira and traditional music, and became one of the original members of the very successful Brazilian group “Timbalada”. He relocated to the United States in 1998, and has been touring worldwide with Sergio Mendes, having contributed to all his albums since 2008 (including the Grammy-winning album Bom Tempo). He has also played and recorded with artists such as Kanye West, Airto Moreira, Enrique Iglesias, Alex Acunha, Giovanni Hidalgo, and Kendrick Lamar, and appears on the Oscar-nominated soundtrack of motion picture Rio and the video game Angry Birds.

Anat Cohen & Choro Aventuroso “The lyric beauty of her tone, easy fluidity of her technique and extroverted manner of her delivery make this music accessible to all.”—Chicago Tribune Anat Cohen explores the full range of the clarinet’s possibilities to exhilarating, brilliant effect. The Tel-Aviv native and New York transplant is known for drawing on her diverse musical loves; with her new group, Choro Aventuroso, she is doing just that. The band adapts the Afro-Western, improvisatory, instrumental music “churo,” providing fertile grounds for Cohen’s virtuosity to develop and explore.

The Jazz Journalists Association has voted Cohen “Clarinetist of the Year” nine years in a row, and she has topped both the Critics and Readers Polls in the clarinet category in DownBeat magazine every year since 2011. Fresh Air’s Terry Gross credits Cohen with “bringing the clarinet to the world” and the New York Times hails her as a “master.” In addition to Cohen, Choro Aventuroso features Vitor Gonçalves (accordion/piano), Cesar Garabini (seven-string guitar), and Sergio Krakowski (pandeiro).

THE TOWN HALL FOUNDATION The Town Hall’s mission is to provide affordable world-class entertainment by new and established artists to a diverse audience; to inspire the youth of our community to appreciate and participate in the arts at The Town Hall and in schools through our Educational Outreach Program; and to preserve and enhance The Town Hall as a historic landmark venue for the enjoyment and cultural enrichment of generations to come.

FIRE NOTICE The exit indicated by a red light and sign nearest to the seat you occupy is the shortest route to the street. In the event of fire or other emergency please do not run, WALK TO THAT EXIT. Thoughtless persons annoy patrons and endanger the safety of others by lighting matches or smoking in prohibited areas during the performances and intermissions. This violates a city ordinance and is punishable by law.

DIRECTORY OF THEATRE SERVICES ADMINISTRATIVE OFFICES: 212.997.1003 Mon-Fri 9:30 am to 5 pm, for rental & membership info BOX OFFICE: 212.840.2824 Mon-Sat 12 noon to 6pm. 24/7 Recording TICKETMASTER: 800.982.2787 to charge tickets by phone.online Ticketmaster.com LOST AND FOUND: 212.997.0113 CELL PHONE POLICY Cell phones should be silenced prior to the performance as a courtesy to the performers and audience. Lobby Refreshment by Theatre Refreshment Company of NY

MAJOR GIFTS, CORPORATE, FOUNDATION & GOVERNMENT SUPPORT Town Hall Presents is supported, in part, by public funds from The New York City Department of Cultural Affairs in partnership with the City Council. Town Hall’s Education Outreach Programs is made possible by the New York State Council on the Arts with the support of Governor Andrew M. Cuomo and the New York State Legislature. We would like to thank the following foundations, corporations, and government institutions for their support:

T H E T O W N H A L L ’ S YO U N G PAT R O N S C I R C L E Join the next generation of Town Hall supporters! Town Hall’s Young Patrons Circle is a special membership group, ages 21-40, that engages in social and educational activities through exciting events, performances, and programming. We are brought together by a shared love of the arts, a deep interest in social change, civic engagement, and a desire to become part of a growing group of like-minded individuals that support Town Hall. For more information about the Young Patrons Circle, please contact Jacquie Maddox, Director of Development - development@thetownhall.org

TOUR THE HISTORIC TOWN HALL Town Hall has played an integral part in the electrifying cultural fabric of New York City for more than 90 years. A group of Suffragists’ fight for the 19th Amendment led them to build a meeting space to educate people on the important issues of the day. During its construction, the 19th Amendment was passed, and on January 12, 1921 The Town Hall opened its doors and took on a double meaning: as a symbol of the victory sought by its founders, and as a spark for a new, more optimistic climate. In 1921, German composer Richard Strauss performed a series of concerts that cemented the Hall’s reputation as an ideal venue for musical performances. Since, Town Hall has been home to countless musical milestones: The US debuts of Strauss, and Isaac Stern; Marian Anderson’s first New York recital; in 1945, Dizzy Gillespie and Charlie Parker introduced bebop to the world; Bob Dylan’s first major concert in ‘63; and much much more. Learn more. Visit thetownhall.org/tours @TownHallNYC | 8

We invite you to support the Hall at any level, and enjoy the exclusive benefits of becoming a Town Hall Member.

All Members Receive Special Recognition in Town Hall Programs All tickets are subject to availability, tickets do not include Broadway by the Year® *More Sustaining Membership levels available at thetownhall.org/membership

Thanks for putting art in the heart of the community Bank of America applauds The Town Hall for its success in bringing the arts to audiences throughout the community. We commend you on creating an opportunity for all to enjoy and share a cultural experience. Here's to another season of Broadway by the Year! Visit us at bankofamerica.com/arts. 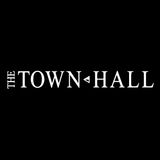