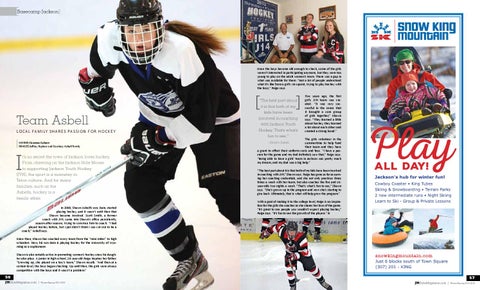 Once the boys became old enough to check, some of the girls weren’t interested in participating anymore, but they were too young to play on the adult women’s team. There was a gap in what was available for them. “Not a lot of people understand what it’s like from a girl’s viewpoint, trying to play hockey with the boys,” Paige says.

t’s no secret the town of Jackson loves hockey. From cheering on the Jackson Hole Moose to supporting Jackson Youth Hockey (JYH), the sport is a mainstay in Teton culture. And for many families, such as the Asbells, hockey is a family affair. In 2000, Shawn Asbell’s son, Dain, started playing hockey, and it wasn’t until then that Shawn became involved. Scott Smith, a former coach with JYH, came into Shawn’s office persistently, season after season, trying to convince him to coach. “I had played hockey before, but I just didn’t think I was cut out to be a coach,” Asbell says.

“The best part about it is that both of my kids have been involved in coaching with Jackson Youth Hockey. That’s what’s fun to see.”

Five years ago, the first girl’s JYH team was created. “It was very successful in the sense that it brought a core group of girls together,” Shawn says. “They learned a little about hockey, they learned a lot about each other and created a strong bond.”

The girls volunteer in the summertime to help fund their team and they have a grant to offset their uniform costs and fees. “I have a passion for the game and my dad definitely saw that,” Paige says. “Being able to have a girls’ team in Jackson was pretty much my dream, and my dad was a big help.” – Shawn Asbell

“The best part about it is that both of my kids have been involved in coaching with JYH,” Shawn says. Paige has gone as far as earning her coaching credentials, and she not only practices three times a week with her team, but also coaches the five and sixyear-olds two nights a week. “That’s what’s fun to see,” Shawn says. “She’s grown up in the program and now she’s starting to give back. Ultimately, that is what will help grow the program.” With a goal of making it to the college level, Paige is an inspiration for the girls she coaches as she shares her love of the game. “It’s great to see people you wouldn’t expect playing hockey,” Paige says. “It’s fun to see the growth of the players.” n

Since then, Shawn has coached every team from the “mini mites” to high schoolers. Now, his son Dain is playing hockey for the University of Wyoming as a sophomore. Shawn is also notably active in promoting women’s hockey since his daughter also plays. A junior in high school, 16-year-old Paige inspires her father. “Growing up, she played on a boy’s team,” Shawn recalls. “And then at a certain level, the boys began checking. Up until then, the girls were always competitive with the boys and it wasn’t a problem.”