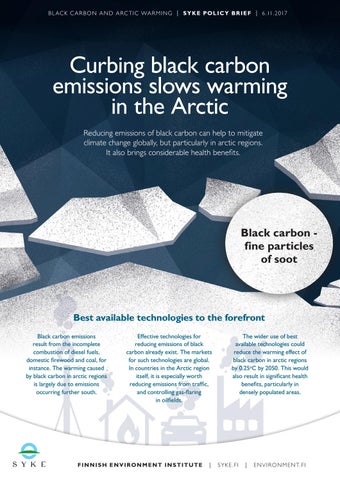 Best available technologies to the forefront Black carbon emissions result from the incomplete combustion of diesel fuels, domestic firewood and coal, for instance. The warming caused by black carbon in arctic regions is largely due to emissions occurring further south.

The wider use of best available technologies could reduce the warming effect of black carbon in arctic regions by 0.25oC by 2050. This would also result in significant health benefits, particularly in densely populated areas.

What is black carbon? Particles of black carbon enter the atmosphere around the world from sources including the burning of household firewood, other biomass and coal, as well as exhaust fumes from road vehicles, agricultural and industrial machinery, and power plants. Sooty particles also form when surplus oil and gas are burnt or flared off in oilfields, and during forest fires. About 60% of global emissions of black carbon are generated in Asia. Emission figures for China and India are particularly high. Black carbon particles accelerate global warming. Associated emissions of sulphur compounds, typically released at the same time as black carbon, contrastingly have a cooling effect – but these cooling pollutants have other harmful impacts on the environment and health.

and reduce the reflecting properties of the snow-covered surface. The black carbon particles are themselves heated by the sun, resulting in melting. This effect is particularly pronounced in spring and summer, when there is plenty of sunlight. Sooty particles are transported to the far north by winds blowing in from more populated and industrial regions, but local emissions are also significant. About a third of the warming caused by black carbon in the Arctic is due to emissions from countries that are members of the Arctic Council, though their emissions only add up to 6% of global emissions2,3.

Temperatures in the Arctic are rising more than twice as rapidly as global average temperatures. An estimated 20–25% of warming in the Arctic is today caused by black carbon1. Sooty particles that fall onto snow and ice absorb sunlight,

Global emissions of black carbon are no longer rising significantly, since technical solutions for reducing them are increasingly being adopted. But there is still plenty of scope for the further use of such solutions – and for tighter emission limits. The wider use of best available technologies could reduce the warming effect of black carbon in arctic regions by an estimated 10–15% by 2050 – corresponding to 0.25oC3. An effective way to reduce the climate impacts of black carbon in the Arctic would be to strictly limit the flaring of surplus gas in the oil industry. Technical solutions for utilising this wasted resource in energy production are already available. The World Bank has launched an initiative that aims to halt such flaring by 2030. All of the arctic oilproducing countries are committed to this target. The burning of domestic firewood causes an estimated 60% of global black carbon emissions2,3, while also inducing serious health problems in many regions. There is a great worldwide need for clean technologies for the small-scale burning of firewood. Improved forest fire prevention systems would likewise reduce emissions of sooty particles considerably, while also preserving valuable natural resources, carbon sinks and biodiversity.

Negative health impacts The World Health Organisation (WHO) has reported that black carbon causes health problems including heart, circulatory and respiratory diseases, and premature deaths. Health impacts are worsened by various toxic compounds that become attached to sooty particles, such as PAH compounds, organic acids and toxic metals like arsenic. These pollutants can induce inflammations and even cancer. Together with the black carbon particles they can penetrate deep into our lungs, and possibly also into our blood. These toxic substances also contaminate the environment, where they may accumulate in food chains and end up in our food. Vulnerability to black carbon emissions is especially high in urban areas.

Rapid warming observed in the Arctic

Burning of organic material on farmland

Flaring in the oil and gas industry

These figures represent the total emissions in gigagrammes from various sources within the Arctic Council’s member countries in 2010, and a forecast for 2030 based on existing regulations. Source: Klimont et al. 2 and SYKE

Black carbon emissions from the Arctic Council’s member states in 2015, in gigagrammes. Though these emission levels are smaller than those in Asian countries, they are responsible for about a third of the total warming caused by black carbon in the Arctic.

Actions urgently needed in arctic countries About 40% of the black carbon emissions generated within the arctic countries originate from road traffic and machines used in agriculture and construction2. Stricter emission limits can encourage the development and adoption of cleaner motors. Larger power stations and industrial plants in the Arctic region have in general already adopted technologies to reduce emissions of black carbon. But some old and inefficient facilities with high emissions still remain. The wider adoption of energy-efficient technologies and a shift from oil to gas could both reduce emissions significantly. Additional reductions could be achieved by upgrading heating systems to use cleaner fuels, heat pumps and other more energy-efficient solutions.

Various ongoing studies around the world are examining how measures to limit black carbon emissions could mitigate climate change. One issue under investigation is the impact of different levels of emission controls on the rate of warming. One study under way in Finland is assessing how economic growth in the Eurasian Arctic region may affect the climate. The Finnish Meteorological Institute’s NABCEA project is analysing the relative significance of different emission sources, and making forecasts for the next 50 years. Researchers at the Finnish Environment Institute are meanwhile modelling the locations of emission sources and temporal variations in emission levels. The WHITE project, led by the University of Eastern Finland, is mapping out options for regulating emissions of black carbon and other short-lived climate pollutants; while experts from the Finnish Environment Institute are creating emission scenarios for alternative regulatory policies.

Many factors behind emissions of black carbon and how they are transported in the atmosphere are still unclear.

The Arctic Council Since 1996 the Arctic Council has served as a forum for cooperation between all countries with arctic territories. Its members include Norway, Sweden, Finland, Denmark, Iceland, Canada, Russia and USA, as well as several organisations representing the region’s indigenous peoples. The Council additionally has 13 observer countries, of which eight are in Europe, including France, Germany and UK, and five are in Asia, including China and India. Many inter-governmental and non-governmental organisations also act as observers. Finland took over the chairmanship of the Arctic Council in May 2017, and will chair the Council for two years. The Arctic Council’s Arctic Monitoring and Assessment Programme (AMAP) has published scientific estimates of the impacts of black carbon in arctic regions3. The Council has also assigned an expert working group to assess black carbon emissions and devise ways to reduce them. In Spring 2017 an Arctic Council ministerial meeting approved the shared goal of reducing emissions of black carbon by 25-33% of their 2013-levels by 2025.

The Earth’s natural cooling system in danger The Arctic region serves as a natural cooling system for the global climate. If this function diminishes, global warming will become even more rapid. The melting of continental ice sheets in the Arctic and the Antarctic would also cause potentially disastrous sea level rise worldwide. Warming in arctic regions is above all a consequence of carbon dioxide emissions. Reducing these emissions is of the utmost importance, though this would only lead to climatic cooling after some delay, since CO2 emissions may remain in the atmosphere for centuries. Black carbon particles only stay in the atmosphere for about a week, so reducing sooty emissions has a more immediate cooling effect. Warming in arctic regions is also caused by other short-lived climate pollutants (SLCPs) including methane, tropospheric ozone and certain hydrofluorocarbon compounds. It is important to reduce emissions of these pollutants alongside black carbon.

Actions to reduce emissions of black carbon • The Climate and Clean Air Coalition strives to improve air quality and mitigate climate change, for instance by limiting emissions of black carbon. Members of this voluntary partnership include representatives from governments, businesses, research institutes, non-governmental organisations and other bodies. www.ccacoalition.org/en • The World Bank’s initiative to reduce the flaring of gas in oilfields. www.worldbank.org/en/programs/zero-routineflaring-by-2030 • The Arctic Council’s Arctic Contaminants Action programme (ACAP) has launched various local projects designed to reduce black carbon emissions. In one such project, emissions from buses in the city of Murmansk have been reduced, resulting in improvements in air quality. www.arctic-council.org/index. php/en/acap-home/black-carbon-case-studies • The UN Convention on Long-range Transboundary Air Pollution defines a framework for monitoring, discussing and controlling emissions of black carbon. www.unece.org/index.php?id=45881 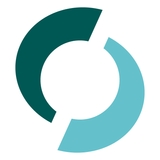