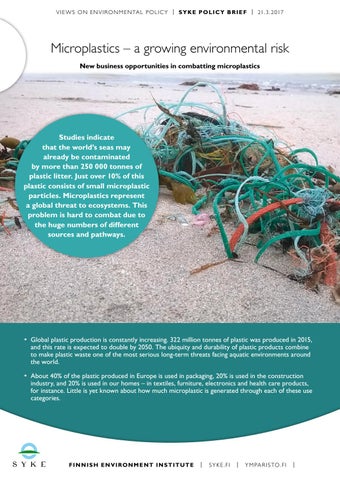 Studies indicate that the world’s seas may already be contaminated by more than 250 000 tonnes of plastic litter. Just over 10% of this plastic consists of small microplastic particles. Microplastics represent a global threat to ecosystems. This problem is hard to combat due to the huge numbers of different sources and pathways.

• Global plastic production is constantly increasing. 322 million tonnes of plastic was produced in 2015, and this rate is expected to double by 2050. The ubiquity and durability of plastic products combine to make plastic waste one of the most serious long-term threats facing aquatic environments around the world.

• About 40% of the plastic produced in Europe is used in packaging, 20% is used in the construction

industry, and 20% is used in our homes – in textiles, furniture, electronics and health care products, for instance. Little is yet known about how much microplastic is generated through each of these use categories.

WATER BODY FIGURE 1. LAND-BASED SOURCES OF MICROPLASTICS AND THEIR PATHWAYS. MODIFIED FROM THE ORIGINAL BY PETER J. KERSHAW (UNEP2016).

What are microplastics? Microplastics are small fragments or granules of plastic less than 5mm in diameter. They are largely formed as plastic products gradually break up, though some plastic products such as the granules in certain personal care products are deliberately manufactured to this size. Other well-known sources of microplastics include fibres from synthetic textiles, and plastic fragments generated by road traffic. The small size of microplastics means that they can easily adsorb and accumulate contaminants from the surrounding water, while they may also contain chemical additives that are harmful to the environment. It is hard to determine where microplastics come from, and extremely difficult to remove them from aquatic environments.

Microplastics hinder the use of sewage sludge Finland’s wastewater treatment plants generate a total of about 150,000 dry tonnes of sewage sludge annually. Finnish legislation sets maximum limits to concentrations of heavy metals in sewage sludge utilized on agricultural areas. However, currently such limits are not set for organic contaminants or microplastics. Finnish legislation does not yet address the whole issue of microplastics, so sewage may still be used in spite of the related microplastic load to the environment. This means that the microplastics and other harmful compounds in the sludge can be released into the environment, affecting soils and organisms. Because of this problem, experts believe that the precautionary principle should be applied when sludge treated with current methods is used. From the perspective of creating a circular economy, it would be desirable to find ways to reuse the valuable organic materials and nutrients in the sludge – particularly phosphorus, since this would help to conserve globally limited reserves of mineral phosphorus. In Finland more than 90% of sewage sludge is used in landscaping, and only small quantities are used on farms.

Road traffic – a significant source of microplastics Road traffic generates highly significant quantities of microplastics, as well as small particles of rubber. Tyres are a mixture of synthetic and non-synthetic rubber compounds (over 80% of tyre mass) and various other chemicals. These particles, largely derived from vehicle tyres and the materials used for marking roads, are easily washed into water courses in runoff from roads. This problem should in future be considered in A CAR TYRE urban planning. WEIGHING ABOUT Mechelininkatu in Helsinki is one 8 KILOS TYPICALLY of the busiest streets in Finland. DurLOSES AS MUCH AS ing the years 2010–2015 traffic levels 10–20% OF ITS WEIGHT averaged 21,000-35,500 vehicles per DURING day. Calculations indicate that such ITS LIFETIME traffic levels generate between 4 and 7 tonnes of car tyre wear annually on this street alone. Some of this material will soon be washed directly into a nearby sea bay through a storm drain system currently being constructed.

Potential means to combat microplastics Microplastics represent such a serious risk to aquatic and terrestrial environments that there is an urgent need to develop and improve effective means to combat their proliferation, using the best possible solutions from a wider environmental perspective. The most effective way to prevent possible environmental damage from microplastics is to reduce the use of plastic products in general, and replace them with less harmful products and materials. It will not be enough alone to increase awareness of the problem by disseminating information. Many

countries have already adopted legal and economic measures designed to reduce the use of certain plastic products such as microplastics in personal hygiene and cosmetics products. Finland can particularly offer high levels of expertise to promote the wider use of wood-based products in packaging, construction and other sectors. Alternatives to the harmful chemical additives currently used in plastics should also be further developed. These areas offer excellent opportunities for the development of innovative products and business models, both in Finland and internationally.

1. The generation of microplastics can be prevented by adopting suitable economic, legal and informative measures. Such actions can also encourage innovation and create new business opportunities. By applying other countries’ experiences of such measures with Finland’s high levels of knowhow on bio-based materials we can find cost-effective solutions to meet demand from around the world. 2. The use of sewage sludge from wastewater treatment plants must be carefully planned with regard to environmental impacts. This will increasingly involve considering the risks caused by microplastics and other harmful substances. The goal should be to find safe and effective ways to utilise the nutrients in the sludge, for instance by finding ways to extract valuable nutrients and process them to make new fertilisers. In this context partial incineration may be considered as an option for processing sludge. 3. The quantities of microplastics entering the sea from built-up areas can be reduced by carefully planning drainage systems and adopting new technical solutions. Concentrations of contaminants in urban runoff can be reduced through comprehensive anticipatory planning, involving the use of favourable pipe and drain systems, maintenance services and analytical measurements. There is also need for material solutions and designs for purifying urban storm water.