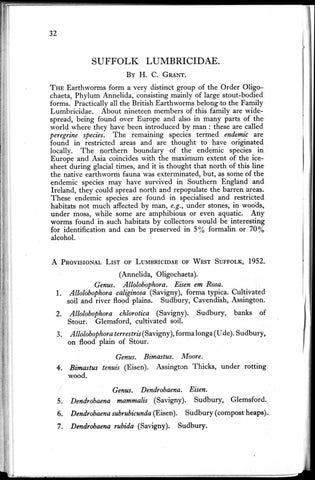 THE Earthworms form a very distinct group of the Order Oligochaeta, Phylum Annelida, consisting mainly of large stout-bodied forms. Practically all the British Earthworms belong to the Family Lumbricidae. About nineteen members of this family are widespread, being found over Europe and also in many parts of the world where they have been introduced by man : these are called peregrine species. The remaining species termed endende are found in restricted areas and are thought to have originated locally. The northern boundary of the endemic species in Europe and Asia coincides with the maximum extent of the icesheet during glacial times, and it is thought that north of this line the native earthworm fauna was exterminated, but, as some of the endemic species may have survived in Southern England and Ireland, they could spread north and repopulate the barren areas. These endemic species are found in specialised and restricted habitats not much affected by man, e.g., under stones, in woods, under moss, while some are amphibious or even aquatic. Any worms found in such habitats by collectors would be interesting for identification and can be preserved in 5% formalin or 70% alcohol.

A Nematode. Whilst collecting from the Newbournian Red Crag at Felixstowe during August, 1942, I accidently squashed an earwig (F. auricularia) that was hiding in a fossil shell. Immediately a nematode, about the size and colour of Mermis myrmecophila emerged from it. I have recently been able to name this species by the aid of Dr. T. Goodey's " Soil and Freshwater Nematodes " (Methuen) as Mermis nigrescens, Dujardin. Dr. Goodey teils us that the worms occur most abundantly in June, eggs are laid, and the further development depends on these eggs being eaten by some suitable insect, such as an earwig or grasshopper. JOHN L .