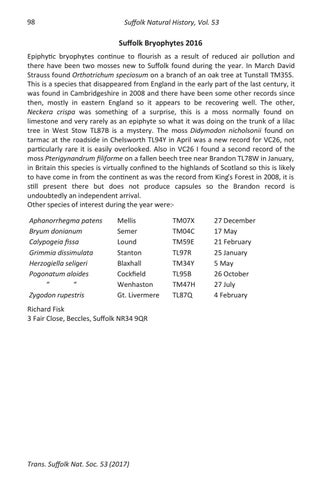 Suffolk Bryophytes 2016 Epiphytic bryophytes continue to flourish as a result of reduced air pollution and there have been two mosses new to Suffolk found during the year. In March David Strauss found Orthotrichum speciosum on a branch of an oak tree at Tunstall TM35S. This is a species that disappeared from England in the early part of the last century, it was found in Cambridgeshire in 2008 and there have been some other records since then, mostly in eastern England so it appears to be recovering well. The other, Neckera crispa was something of a surprise, this is a moss normally found on limestone and very rarely as an epiphyte so what it was doing on the trunk of a lilac tree in West Stow TL87B is a mystery. The moss Didymodon nicholsonii found on tarmac at the roadside in Chelsworth TL94Y in April was a new record for VC26, not particularly rare it is easily overlooked. Also in VC26 I found a second record of the moss Pterigynandrum filiforme on a fallen beech tree near Brandon TL78W in January, in Britain this species is virtually confined to the highlands of Scotland so this is likely to have come in from the continent as was the record from King’s Forest in 2008, it is still present there but does not produce capsules so the Brandon record is undoubtedly an independent arrival. Other species of interest during the year were:Aphanorrhegma patens Bryum donianum Calypogeia fissa Grimmia dissimulata Herzogiella seligeri Pogonatum aloides “ “ Zygodon rupestris