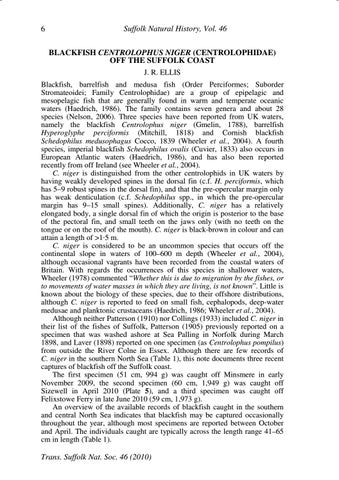 Blackfish, barrelfish and medusa fish (Order Perciformes; Suborder Stromateoidei; Family Centrolophidae) are a group of epipelagic and mesopelagic fish that are generally found in warm and temperate oceanic waters (Haedrich, 1986). The family contains seven genera and about 28 species (Nelson, 2006). Three species have been reported from UK waters, namely the blackfish Centrolophus niger (Gmelin, 1788), barrelfish Hyperoglyphe perciformis (Mitchill, 1818) and Cornish blackfish Schedophilus medusophagus Cocco, 1839 (Wheeler et al., 2004). A fourth species, imperial blackfish Schedophilus ovalis (Cuvier, 1833) also occurs in European Atlantic waters (Haedrich, 1986), and has also been reported recently from off Ireland (see Wheeler et al., 2004). C. niger is distinguished from the other centrolophids in UK waters by having weakly developed spines in the dorsal fin (c.f. H. perciformis, which has 5–9 robust spines in the dorsal fin), and that the pre-opercular margin only has weak denticulation (c.f. Schedophilus spp., in which the pre-opercular margin has 9–15 small spines). Additionally, C. niger has a relatively elongated body, a single dorsal fin of which the origin is posterior to the base of the pectoral fin, and small teeth on the jaws only (with no teeth on the tongue or on the roof of the mouth). C. niger is black-brown in colour and can attain a length of >1·5 m. C. niger is considered to be an uncommon species that occurs off the continental slope in waters of 100–600 m depth (Wheeler et al., 2004), although occasional vagrants have been recorded from the coastal waters of Britain. With regards the occurrences of this species in shallower waters, Wheeler (1978) commented “Whether this is due to migration by the fishes, or to movements of water masses in which they are living, is not known”. Little is known about the biology of these species, due to their offshore distributions, although C. niger is reported to feed on small fish, cephalopods, deep-water medusae and planktonic crustaceans (Haedrich, 1986; Wheeler et al., 2004). Although neither Patterson (1910) nor Collings (1933) included C. niger in their list of the fishes of Suffolk, Patterson (1905) previously reported on a specimen that was washed ashore at Sea Palling in Norfolk during March 1898, and Laver (1898) reported on one specimen (as Centrolophus pompilus) from outside the River Colne in Essex. Although there are few records of C. niger in the southern North Sea (Table 1), this note documents three recent captures of blackfish off the Suffolk coast. The first specimen (51 cm, 994 g) was caught off Minsmere in early November 2009, the second specimen (60 cm, 1,949 g) was caught off Sizewell in April 2010 (Plate 5), and a third specimen was caught off Felixstowe Ferry in late June 2010 (59 cm, 1,973 g). An overview of the available records of blackfish caught in the southern and central North Sea indicates that blackfish may be captured occasionally throughout the year, although most specimens are reported between October and April. The individuals caught are typically across the length range 41–65 cm in length (Table 1).

BLACKFISHRUNNING OFF THE HEAD SUFFOLK COAST

*Scottish records of blackfish from around the west coast of the Shetland Isles are not summarised here. Coincidentally, several Ray’s bream Brama brama, another oceanic fish more commonly encountered from the west of the British Isles, were reported from various beaches in Norfolk in the winter of 2009. There are periodic incursions of Ray’s bream into the North Sea, with dead or moribund specimens subsequently found stranded on the eastern coasts of England in the winter, possibly due to the decreasing sea temperature (Wheeler and Blacker, 1969). The occurrence of oceanic fish, such as blackfish and Ray’s bream, in

BLACKFISHRUNNING OFF THE HEAD SUFFOLK COAST