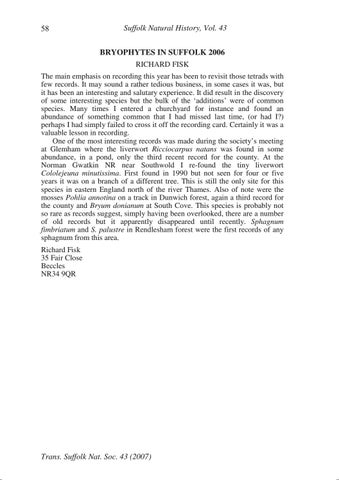 The main emphasis on recording this year has been to revisit those tetrads with few records. It may sound a rather tedious business, in some cases it was, but it has been an interesting and salutary experience. It did result in the discovery of some interesting species but the bulk of the â&#x20AC;&#x2DC;additionsâ&#x20AC;&#x2122; were of common species. Many times I entered a churchyard for instance and found an abundance of something common that I had missed last time, (or had I?) perhaps I had simply failed to cross it off the recording card. Certainly it was a valuable lesson in recording. One of the most interesting records was made during the societyâ&#x20AC;&#x2122;s meeting at Glemham where the liverwort Ricciocarpus natans was found in some abundance, in a pond, only the third recent record for the county. At the Norman Gwatkin NR near Southwold I re-found the tiny liverwort Cololejeuna minutissima. First found in 1990 but not seen for four or five years it was on a branch of a different tree. This is still the only site for this species in eastern England north of the river Thames. Also of note were the mosses Pohlia annotina on a track in Dunwich forest, again a third record for the county and Bryum donianum at South Cove. This species is probably not so rare as records suggest, simply having been overlooked, there are a number of old records but it apparently disappeared until recently. Sphagnum fimbriatum and S. palustre in Rendlesham forest were the first records of any sphagnum from this area. Richard Fisk 35 Fair Close Beccles NR34 9QR