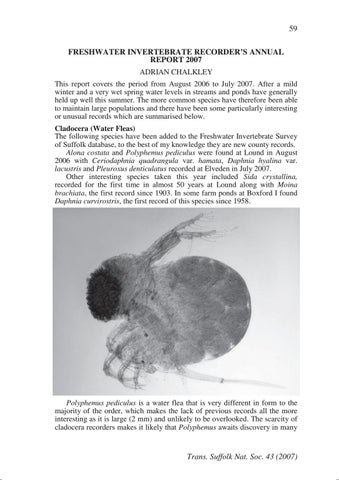 FRESHWATER INVERTEBRATE RECORDERâ&#x20AC;&#x2122;S ANNUAL REPORT 2007 ADRIAN CHALKLEY This report covers the period from August 2006 to July 2007. After a mild winter and a very wet spring water levels in streams and ponds have generally held up well this summer. The more common species have therefore been able to maintain large populations and there have been some particularly interesting or unusual records which are summarised below. Cladocera (Water Fleas) The following species have been added to the Freshwater Invertebrate Survey of Suffolk database, to the best of my knowledge they are new county records. Alona costata and Polyphemus pediculus were found at Lound in August 2006 with Ceriodaphnia quadrangula var. hamata, Daphnia hyalina var. lacustris and Pleuroxus denticulatus recorded at Elveden in July 2007. Other interesting species taken this year included Sida crystallina, recorded for the first time in almost 50 years at Lound along with Moina brachiata, the first record since 1903. In some farm ponds at Boxford I found Daphnia curvirostris, the first record of this species since 1958.

Polyphemus pediculus is a water flea that is very different in form to the majority of the order, which makes the lack of previous records all the more interesting as it is large (2 mm) and unlikely to be overlooked. The scarcity of cladocera recorders makes it likely that Polyphemus awaits discovery in many

more locations. Widely distributed across the UK it feeds almost exclusively on smaller zooplankton prey, especially rotifers. P. pediculus is unusual in being one of the few plankton predators that feed visually, using its large eyes. It can form dense swarms along the shores of lakes, moving out into the open water at night. Coleoptera (Water Beetles) Whilst recording in September at Lound in the north east of the county a particularly large swarm of whirligig beetles was seen. There are 12 species of whirligig beetles that occur in UK waters and they are well known as a sociable insect, often occurring in some numbers whirling about rapidly and apparently at random in stretches of open water. Many texts refer to ‘schools’ of hundreds of individuals occurring in late summer, however I have never seen one as large as that at Lound. As I approached one of the lakes I could see about 5 metres out from the shore what appeared to be a long, sinuous patch of sparkling water, as if the sun was reflecting off a large oil slick. As I got closer I could see this ‘slick’ was made up of innumerable whirligigs slowly whirling around as the sun reflected off their backs. For the most part they were content to slowly swim around each other, but every so often a small patch would become more agitated and whirl around at great speed, then for no apparent reason went back to their slow procession. I estimated the area covered by the school of beetles was about 1·5 metres across and, as it made a sinuous shape parallel to the bank, I paced out the length which was 15 metres. Now on a conservative estimate there were at least 100 whirligigs in each square metre, possibly 150. This gives a total of 1·5 × 100 × 15 = 2,250 or 3,375 beetles if you take the upper estimate. There were also a large number of stray beetles wandering to and fro away from the main swarm, both towards me and towards the opposite bank. So I am sure that there must have been 2,500 to 3,500 individuals on that part of the lake. I recorded two species at Lound, Gyrinus substriatus and G. marinus. The swarm may well have been a mixture of the two, though the few I managed to capture were all G. marinus. As this species has been recorded infrequently in Suffolk before, this is a good record irrespective of the numbers involved although it has been recorded more often in Norfolk. Despite its name it does not seem to be associated with coastal sites. What makes it interesting here is of course the size of the population which may be a result of the second brood of the year having hatched recently, as happens generally in the autumn. The autumn brood is the one to hibernate. In addition to the species above, two other less common whirligigs were found this year; Gyrinus caspius at Orford Marshes in October 2006 and in June 2007 Orectochilus villosus, the Hairy Whirligig, was re-recorded in the River Box at Primrose Wood, Boxford. Possibly the most common species is G. substriatus which was recorded at many sites throughout the year. This includes the stream running through my own garden where I found a stray couple of G. substriatus being mobbed by water crickets Velia caprai in June. When larger numbers of Gyrinus are present Velia do not seem so aggressive.

In May 2007 the nationally scarce (notable category A) water beetle Coelambus nigrolineatus was recorded in farm ponds in Boxford. This is only the second time it has been recorded in Suffolk. Ephemeroptera (Mayflies) In my report last year the discovery of the rare species Paraleptophlebia werneri at Elmsett was probably the most important news. The literature implies that P. werneri overwinters in the egg, but as there appears to be some doubt about this the site was examined during the winter, though no larvae were discovered. In spring 2007 with the enthusiastic permission of the local landowners the original site was resurveyed along with stretches both up and downstream. This resulted in finding a continuous 4 km stretch of the stream containing a healthy population of P. werneri co-existing with the much more common mayfly Habrophlebia fusca, both from the same family Leptophlebiidae. Next year the population will continue to be monitored and nearby streams will also be checked during the short recording season for this species. Another unusual record was also made this year of the burrowing species Ephemera vulgata. The larvae of E. vulgata, along with E. danica are commonly recorded in many of our Suffolk rivers and streams, living in shallow areas with mud and sometimes gravel in which they can burrow. They are best found by kick sampling or sieving. However in April 2007 a large population of E. vulgata was found in a recently dug pond on farmland in Boxford. The pond has very little vegetation as yet and a soft, bare clay bottom in which the larvae are living. I had never found the species in still waters before. My identification was confirmed by Craig Macadam of the Ephemeroptera Recording Scheme, who had also never seen it in ponds in the UK. Since the pond in question is equidistant from headwaters of the River Box and the River Brett I wonder if upstream dispersal might lead to a temporary population here. This may be beneficial in providing for gene exchange between the two river colonies. Alternatively, since E. vulgata is known to occur in ponds and lakes in mainland Europe this may indicate a change of behaviour in the UK population. Further monitoring will need to be done to see if they persist in the pond once it matures, which may in turn depend on the severity of the next few winters. Mollusca (Water Snails) At the beginning of March I had an email from Ian Killeen in which he told me that he had just recorded the American freshwater limpet Ferrissia wautieri from Holbrook Millpond. This prompted me to reappraise some odd looking specimens which I collected at Elveden in July 2006. These did in fact turn out to be F. wautieri which was then present in small numbers along with the more common limpet Acroloxus lacustris. On my return to Elveden in July this year Ferrissia was very much in evidence and more common than Acroloxus. I suspect that Ferrissia wautieri will be found in many more locations in the near future. It is very similar to A. lacustris but more rounded and slightly smaller. If you look at the apex with the spire nearest you then on A. lacustris the apex or spire is twisted to your left and on Ferrissia it is

twisted to the right. Both inhabit very similar habitats, lentic or still waters. It should also be noted that a taxonomic change now means that Ferrissia wautieri has become Ferrissia clessiniana (Mirolli, 1960). Heteroptera (Water Bugs) Favourable weather conditions this Spring resulted in early breeding followed by large numbers of water bugs at most sites this summer. Common species have been recorded regularly; for example the Water Cricket Velia caprai, present in large swarms at established sites and in smaller numbers at several newly colonized sites around my home in Boxford. At Lound in 2006 Corixa dentipes was recorded for only the third time in Suffolk. Although all Lesser Water Boatmen are smaller than the Backswimmers most people are familiar with, the Corixa species are larger than most of the group. C. dentipes seems to have a preference for mildly eutrophic waters with much submerged vegetation which it found in the Lound lakes. Another unexpected bug to be found in good numbers at Lound was Gerris argentatus. Also known as the little pondskater, being only 6Âˇ5 to 10 mm long, it occurs at Lound with Gerris lacustris, the species most commonly found in Suffolk. Easy to recognise by eye due to the difference in size G. argentatus was recorded near Bury St Edmunds by Stuart Warrington in 2003, but before that it had not been seen for 50 years. Widespread and single records also are to be found across Norfolk and Cambridgeshire. Trichoptera (Caddis Flies) In August a single record was made of Agrypnia varia whilst recording near Lowestoft. This caddis fly builds a tube shaped case, which in this instance was made of plant material. It is found in a widespread but sparse pattern of locations across England and is a new record for the Suffolk database. It has not been found in Norfolk as far as I know. Farm ponds are freshwater habitats which can often be neglected and are under recorded. On a farm pond in Boxford an important record was made of the small and unremarkable looking larvae of Holocentropus stagnalis. This species is regionally notable and very local in distribution. There are only two previous Suffolk records for the species, both prior to 1899. According to Ian Wallace, the national recorder for caddis flies, there are only 94 records for the whole of the British Isles. This old pond, dug originally for winter skating, has the only known Suffolk population so far. Fortunately both adults and larvae were found, showing that it is a successful breeding colony which will be monitored in future. The final species in this account is Oecetis lacustris, a tube cased caddis which constructs a curved, tapering case of sand grains. Recorded near Lowestoft in September this is the first record for the larvae in Suffolk, though an adult was caught in a light trap at Flatford Mill in 1969. Although widespread across England it is not numerous and the only records from Norfolk and Cambridgeshire are even earlier. This record is an important indication that the species should be looked for again in suitable habitats. Adrian Chalkley, Freshwater Invertebrate Recorder 37 Brook Hall Road, Boxford, Sudbury, Suffolk CO10 5HS