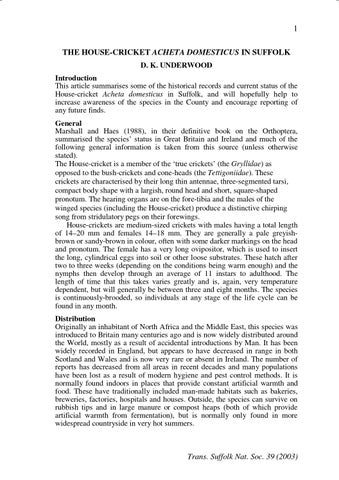 THE HOUSE-CRICKET ACHETA DOMESTICUS IN SUFFOLK D. K. UNDERWOOD Introduction This article summarises some of the historical records and current status of the House-cricket Acheta domesticus in Suffolk, and will hopefully help to increase awareness of the species in the County and encourage reporting of any future finds. General Marshall and Haes (1988), in their definitive book on the Orthoptera, summarised the species’ status in Great Britain and Ireland and much of the following general information is taken from this source (unless otherwise stated). The House-cricket is a member of the ‘true crickets’ (the Gryllidae) as opposed to the bush-crickets and cone-heads (the Tettigoniidae). These crickets are characterised by their long thin antennae, three-segmented tarsi, compact body shape with a largish, round head and short, square-shaped pronotum. The hearing organs are on the fore-tibia and the males of the winged species (including the House-cricket) produce a distinctive chirping song from stridulatory pegs on their forewings. House-crickets are medium-sized crickets with males having a total length of 14–20 mm and females 14–18 mm. They are generally a pale greyishbrown or sandy-brown in colour, often with some darker markings on the head and pronotum. The female has a very long ovipositor, which is used to insert the long, cylindrical eggs into soil or other loose substrates. These hatch after two to three weeks (depending on the conditions being warm enough) and the nymphs then develop through an average of 11 instars to adulthood. The length of time that this takes varies greatly and is, again, very temperature dependent, but will generally be between three and eight months. The species is continuously-brooded, so individuals at any stage of the life cycle can be found in any month. Distribution Originally an inhabitant of North Africa and the Middle East, this species was introduced to Britain many centuries ago and is now widely distributed around the World, mostly as a result of accidental introductions by Man. It has been widely recorded in England, but appears to have decreased in range in both Scotland and Wales and is now very rare or absent in Ireland. The number of reports has decreased from all areas in recent decades and many populations have been lost as a result of modern hygiene and pest control methods. It is normally found indoors in places that provide constant artificial warmth and food. These have traditionally included man-made habitats such as bakeries, breweries, factories, hospitals and houses. Outside, the species can survive on rubbish tips and in large manure or compost heaps (both of which provide artificial warmth from fermentation), but is normally only found in more widespread countryside in very hot summers.

A glance at the most recent national distribution map for House-cricket in Haes and Harding (1997) reveals remarkably few post-1970 records for East Anglia as a whole. Recent publications for neighbouring Norfolk and Essex are also lacking in modern sightings. Richmond (2001) considered many of the more recent Norfolk records to be attributable to insects bred commercially as food for exotic pets (which had presumably escaped, or been released), although there is mention of a possible extant population at Strumpshaw Fen. Whilst, down in Essex, just eight 1 km records were located during the 1980– 1995 survey, including a number from out of doors (Wake, 1997). Sutton (2003) mentions a colony numbering thousands, if not tens of thousands, on a large outdoor compost heap at a farm in the Cambridgeshire Fens. Some older Suffolk Records Historically, the House-cricket appears to have been somewhat ignored as far as natural history recording goes. As a non-native species, and regarded mainly as a pest, it doesn’t seem to have warranted the same degree of interest as many native species. This is often still the case today. Morley, in his summary of Orthoptera in Suffolk (1929) described the species as being present ‘in Ipswich houses during 1894 and 1901’ and ‘often heard chirping in bake-houses there’, although it must surely have been present in the County long before then. Rather surprisingly, he had no further records to mention in his ‘Orthoptera of Suffolk Revised’ of 1946. There then appears to be an almost total lack of information on the species. Maybury (1982) had no mention of the species (so, presumably, either had no new records or ignored it as an alien) and Ling (2000) gave the only ‘recent’ report from Suffolk as coming from Hundon in 1973. Suffolk Records in 2002 Thankfully, the recent increase in interest in Orthoptera produced a number of records for this species during 2002 (as predicted by Ling, 2000). The first came from manure heaps on Wideham Field, West Stow (TL801716) where Chris Gregory heard one stridulating on 30 July. This was later followed by two stridulating there on 30 August. In the east of the County, the Suffolk Moth Group visited the National Trust’s Orford Ness reserve for an overnight field trip on 23 August. It was during the early hours of the following morning that I found an adult female House-cricket that hopped out from either under, or inside, one of my walking boots that had been left in the lounge area of the volunteer accommodation block (TM43774898). It was quickly captured, identified and photographed before being released where found. This was a most unexpected find and one of the highlights of the trip. Some excellent records quickly followed these from another site in the west of the County. Stuart Read, who was one of those present at the Orford Ness find, discovered two nymphs inside crawling insect monitors at a pet food factory on Chilton Industrial Estate, Sudbury (TL8841) on 16 October. A whole string of sightings were made at this site between 4 and 11 November, peaking with 50+ of all stages captured alive on 6 November. It is fortunate that most of these were taken into (temporary) captivity, as routine pest control

procedures around this time resulted in the area being sprayed with insecticide. A small number of individuals must have survived this though, as sightings were later made on 20 (adult male) and 22 November (adult male and adult female). These recent records show that the species does still persist in Suffolk where conditions are suitable and, no doubt, awaits discovery at other sites. Anyone who has any other records for the House-cricket (recent or historical) is encouraged to send them to Stuart Ling, the County Orthoptera Recorder in order to assist with our knowledge of the distribution and populations of this fascinating insect. Acknowledgments Kind thanks go to the following people who have been helpful in the writing of this paper; Martin Sanford at SBRC for copies of some of the older papers from ‘The Transactions’, and Chris Gregory and Stuart Read for information relating to their records. References Haes, E. C. M. and Harding, P. T. (1997). Atlas of grasshoppers, crickets and allied insects in Britain and Ireland. The Stationery Office, London. Ling, S. J. (2000). Orthoptera of Suffolk. Trans. Suffolk Nat. Soc., 36: 53–60. Marshall, J. A. & Haes, E. C. M. (1988). Grasshoppers and allied insects of Great Britain and Ireland. Harley Books, Colchester. Maybury, G. W. (1982). Suffolk Orthoptera. Trans. Suffolk Nat. Soc., 18: 289– 292. Morley, C. (1929). The Orthoptera of Suffolk. Trans. Suffolk Nat. Soc., 1: 92– 97. Morley, C. (1946). Orthoptera of Suffolk Revised. Trans. Suffolk Nat. Soc., 6: 82–85. Richmond, D. (2001). Grasshoppers and allied insects of Norfolk. Norfolk & Norwich Naturalists’ Society, Norwich. Sutton, P. (2003). Orthoptera report. British Wildlife 15 56–58. Wake, A. J. (1997). Grasshoppers & Crickets of Essex. Colchester Natural History Society, Colchester. Darren K. Underwood 29 Cordell Road Long Melford Sudbury Suffolk CO10 9EH email: darrenunderwood@clara.co.uk

THE HOUSE-CRICKET ACHETA DOMESTICUS IN SUFFOLK

THE HOUSE-CRICKET ACHETA DOMESTICUS IN SUFFOLK