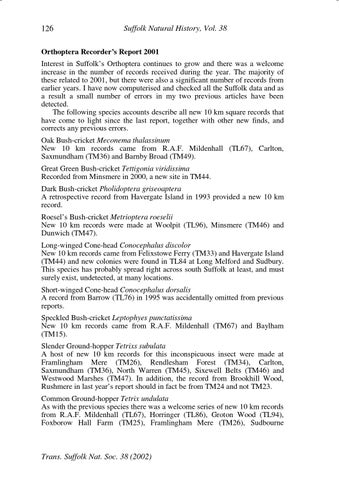 Orthoptera Recorder’s Report 2001 Interest in Suffolk’s Orthoptera continues to grow and there was a welcome increase in the number of records received during the year. The majority of these related to 2001, but there were also a significant number of records from earlier years. I have now computerised and checked all the Suffolk data and as a result a small number of errors in my two previous articles have been detected. The following species accounts describe all new 10 km square records that have come to light since the last report, together with other new finds, and corrects any previous errors. Oak Bush-cricket Meconema thalassinum New 10 km records came from R.A.F. Mildenhall (TL67), Carlton, Saxmundham (TM36) and Barnby Broad (TM49). Great Green Bush-cricket Tettigonia viridissima Recorded from Minsmere in 2000, a new site in TM44. Dark Bush-cricket Pholidoptera griseoaptera A retrospective record from Havergate Island in 1993 provided a new 10 km record. Roesel’s Bush-cricket Metrioptera roeselii New 10 km records were made at Woolpit (TL96), Minsmere (TM46) and Dunwich (TM47). Long-winged Cone-head Conocephalus discolor New 10 km records came from Felixstowe Ferry (TM33) and Havergate Island (TM44) and new colonies were found in TL84 at Long Melford and Sudbury. This species has probably spread right across south Suffolk at least, and must surely exist, undetected, at many locations. Short-winged Cone-head Conocephalus dorsalis A record from Barrow (TL76) in 1995 was accidentally omitted from previous reports. Speckled Bush-cricket Leptophyes punctatissima New 10 km records came from R.A.F. Mildenhall (TM67) and Baylham (TM15). Slender Ground-hopper Tetrixs subulata A host of new 10 km records for this inconspicuous insect were made at Framlingham Mere (TM26), Rendlesham Forest (TM34), Carlton, Saxmundham (TM36), North Warren (TM45), Sixewell Belts (TM46) and Westwood Marshes (TM47). In addition, the record from Brookhill Wood, Rushmere in last year’s report should in fact be from TM24 and not TM23. Common Ground-hopper Tetrix undulata As with the previous species there was a welcome series of new 10 km records from R.A.F. Mildenhall (TL67), Horringer (TL86), Groton Wood (TL94), Foxborow Hall Farm (TM25), Framlingham Mere (TM26), Sudbourne

NOTES ON THE ORTHOPTERA SUFFOLK LIST REPORT OF COLEOPTERA

(TM45) and Dunwich Heath (TM46). The records in last year’s report from Ipswich Golf Course and Newbourne Springs relate to TM24 and not TM14, where this species was finally refound in Ipswich during 2001. Stripe-winged Grasshopper Stenobothrus lineatus In East Suffolk, new sites were found in TM14 at Piper’s Vale and in TM34 at Sutton Heath. Meadow Grasshopper Chorthippus parallelus New 10 km records came from Fornham St Genevieve (TL86) and Barnby Broad (TM49) and there was a post-1970 refind at Benacre Broad (TM58). Mottled Grasshopper Myrmeleotettix maculates New 10 km records were made at R.A.F. Mildenhall (TL67) and Hadleigh (TM04). Lesser Cockroach Ectobius paanzeri This species was recorded once again from Sizewell in 2001 and one caught in the moth trap at Landguard (TM23) was the first site record since 1998. Lesser Earwig Labia minor Probably the most interesting records received during the year were the surprising number for this species, largely due to the work of the Society’s Coleoptera Recorder, David Nash. Post-1970 refinds were made at Hundon (TL74), where this earwig was still present until at least 1997, and East Bergholt (TM03) and entirely new 10 km records came from Icklingham (TM77), Long Melford (TM84), Stutton and Capel St Mary (TM13) and Coddenham and Baylham (TM15). Common Earwig Forficula auricularia New 10 km records came from Beck Row (TL67) and Little Cornard (TL93), the latter a post-1970 refind. Interest in Suffolk’s Orthoptera continues to grow each year and the corresponding rise in the number of submitted records has helped to increase knowledge about their distribution in the county. With more people taking an interest in this fascinating group, now would seem an opportune time to highlight some areas for future recording effort. Although records for all species are greatly needed, the following would all benefit from specific searches: Great Green Bush-cricket – this is rather localised in Suffolk, but is readily located by song and there is a strong possibility that colonies may remain undetected. Scrubby, south-facing slopes would be ideal places to search for this magnificent insect. Roesel’s Bush-cricket and Long-winged Cone-head - both these species are rapidly expanding their ranges and surely remain unrecorded from many areas. Short-winged Cone-head – there are still large gaps for this species along the coast and associated estuaries and records from inland watercourses are almost non-existent.

Stripe-winged Grasshopper – there have hardly been any recent records from the Brecks where it is surely widespread, and further searches of the coastal heaths will undoubtedly turn up new records. Common Green Grasshopper - this species has a very curious distribution in the county, with recent records centred around the Brecks and the Minsmere – Walberswick stretch of the coast. It would seem unlikely to be restricted to these two areas and specific searches in suitable habitat will hopefully produce more records. Short-winged Earwig – recent records have shown this species to be widespread in central and south-western parts of the county, so it would seem reasonable to assume that it has been overlooked in other areas. Visitors to the Stour Valley in particular should keep an eye out for Lesne’s Earwig, which may well turn up at new sites. My thanks got to the following for sending me their records: A. Butcher, C.Gregory, D. Nash, N. Percival, D. Richmond, R. Ruffell, N. Sherman, J. Widgery and in particular, P. Lee and D. Underwood for their comprehensive lists. Stuart Ling 4 Oxford Road, Ipswich IP4 1NL