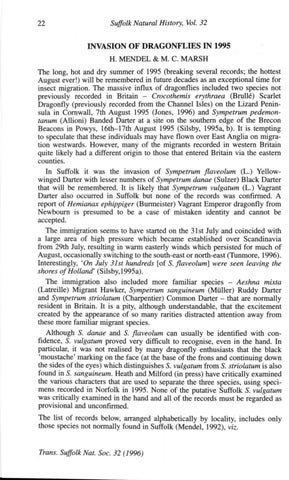 INVASION OF DRAGONFLIES IN 1995 H. MENDEL & M. C. MARSH The long, hot and dry summer of 1995 (breaking several records; the hottest August ever!) will be remembered in future decades as an exceptional time for insect migration. The massive influx of dragonflies included two species not previously recorded in Britain - Crocothemis erythraea (BrĂźlle) Scarlet Dragonfly (previously recorded from the Channel Isles) on the Lizard Peninsula in Cornwall, 7th August 1995 (Jones, 1996) and Sympetrum pedemontanum (Allioni) Banded Darter at a site on the southern edge of the Brecon Beacons in Powys, 16th-17th August 1995 (Silsby, 1995a, b). It is tempting to speculate that these individuals may have flown over East Anglia on migration westwards. However, many of the migrants recorded in western Britain quite likely had a different origin to those that entered Britain via the eastern counties. In Suffolk it was the invasion of Sympetrum flaveolum (L.) Yellowwinged Darter with lesser numbers of Sympetrum danae (Sulzer) Black Darter that will be remembered. It is likely that Sympetrum vulgatum (L.) Vagrant Darter also occurred in Suffolk but none of the records was confirmed. A report of Hemianax ephippiger (Burmeister) Vagrant Emperor dragonfly from Newbourn is presumed to be a case of mistaken identity and cannot be accepted. The immigration seems to have started on the 3Ist July and coincided with a large area of high pressure which became established over Scandinavia from 29th July, resulting in warm easterly winds which persisted for much of August, occasionally switching to the south-east or north-east (Tunmore, 1996). Interestingly, 'On July 31st hundreds [of S. flaveolum] were seen leaving the shores of Holland' (Silsby, 1995a). The immigration also included more familiar species - Aeshna mixta (Latreille) Migrant Hawker, Sympetrum sanguineum (MĂźller) Ruddy Darter and Sympetrum striolatum (Charpentier) Common Darter - that are normally resident in Britain. It is a pity, although understandable, that the excitement created by the appearance of so many rarities distracted attention away from these more familiar migrant species. Although S. danae and 5. flaveolum can usually be identified with confidence, S. vulgatum proved very difficult to recognise, even in the hand. In particular, it was not realised by many dragonfly enthusiasts that the black 'moustache' marking on the face (at the base of the frons and continuing down the sides of the eyes) which distinguishes S. vulgatum from S. striolatum is also found in S. sanguineum. Heath and Milford (in press) have critically examined the various characters that are used to separate the three species, using specimens recorded in Norfolk in 1995. None of the putative Suffolk S. vulgatum was critically examined in the hand and all of the records must be regarded as provisional and unconfirmed. The list of records below, arranged alphabetically by locality, includes only those species not normally found in Suffolk (Mendel, 1992), viz.

S. danae Black Darter Lost as a breeding species in Suffolk in the 1950s, the Single credible, although unconfirmed report since that time was from Walberswick National Nature Reserve in September 1988. Several specimens reported at that time may have been migrants. S. danae is restricted to acid bog habitats for breeding. Although such habitats are very scarce in Suffolk the species could easily re-establish itself at places such as Walberswick N.N.R. S. flaveolum Yellow-winged Darter Apart from a record for Easton Bavents TM5077 on 7th September 1994, when a Single cf was recorded by E. W. Patrick and J. M. Cawston (who photographed the specimen), the last record was on 14th August 1953 at East Bergholt. S. flaveolum has never before been recorded in such huge numbers. There is a defmite possibility that this dragonfly may become established as a breeding species in Britain following the 1995 immigration as it has, on a temporary basis, in the past. Between 1945 and 1947 it is believed that a breeding colony of S. flaveolum was established at Alderfen Broad in Norfolk (Ellis, 1948). It was probably killed off by the very severe winter of 1947-48. (See Plate 5) S. vulgatum Vagrant Darter According to Hammond (1983) there have been only eight British records for this species, none of them from Suffolk. Merritt, Moore and Eversham (1996) confirm that until 1995 there had not been a reliable record since 1946. (See Plate 6) The records below include a few from just outside the recording area of Suffolk (Vice-counties 25 and 26). It is certainly not exhaustive and readers are asked to advise the authors of additional records that may not have been considered. Grid references assigned by the authors are in Square brackets [ ], as are authors' comments. Aldeburgh 6th August - 3 c f c f S. flaveolum in wheat field, Aldeburgh Marshes, TM4556; 5 cfcf S. flaveolum at Church Farm estate (probably also 1 cf S. vulgatum but the record could not be confirmed), TM4657; 2 cfcf S. flaveolum in churchyard TM4656. W. J. Brame and E. W. Patrick. Benacre Ist August - S. flaveolum just to the south of Benacre Pits on a rough grass area near to the shore, TM534835. A. Watchman. 14th August - 4 cf Cf S. flaveolum, TM5382. R. Waiden. Covehithe 2nd August - Shoreline littered with dead insects [TM5281]; mainly ladybirds (Coleoptera: Coccinellidae) and Peacocks Inachis io L. but including a specimen of S. flaveolum (now in the Castle Museum, Colchester). J. P. Bowdrey. Dun wich 6th August - Several S. flaveolum on the saltmarshes behind the shingle seadefences TM4771. Almost certainly also several c f c f S. vulgatum (judging by the colour - a distinctive carmine red) but these evaded capture so the record must remain provisional. H. Mendel. lOth August - 3 cfc? and 2 9 9 S. flaveolum on salt marshes at Dunwich TM4770. A. P. Richards.

Invasion of Dragonflies in 1995

Invasion of Dragonflies in 1995