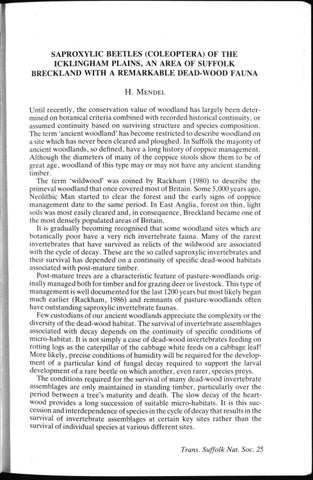 SAPROXYLIC B E E T L E S (COLEOPTERA) OF THE ICKLINGHAM PLAINS, AN AREA OF SUFFOLK BRECKLAND WITH A REMARKABLE DEAD-WOOD FAUNA H . MENDEL Until recently, the conservation value of woodland has largely been determined on botanical criteria combined with recorded historical continuity, or assumed continuity based on surviving structure and species composition. The term 'ancient woodland' has b e c o m e restricted to describe woodland on a site which has never been cleared and ploughed. In Suffolk the majority of ancient woodlands, so defined, have a long history of coppice management. Although the diameters of many of the coppice stools show them to be of great age, woodland of this type may or may not have any ancient Standing timber. The term 'wildwood' was coined by R a c k h a m (1980) to describe the primeval woodland that once covered most of Britain. Some 5 , 0 0 0 years ago, Neolithic M a n started to clear the forest and the early signs of coppice management date to the same period. In East Anglia, forest on thin, light soils was most easily cleared and, in consequence, Breckland b e c a m e one of the most densely populated areas of Britain. It is gradually becoming recognised that some woodland sites which are botanically poor have a very rieh invertebrate fauna. Many of the rarest invertebrates that have survived as relicts of the wildwood are associated with the cycle of decay. T h e s e are the so called saproxylic invertebrates and their survival has depended on a continuity of specific dead-wood habitats associated with post-mature timber. Post-mature trees are a characteristic feature of pasture-woodlands originally managed both for timber and for grazing deer or livestock. This type of management is well documented for the last 1200 years but most likely began much earlier ( R a c k h a m , 1986) and remnants of pasture-woodlands often have outstanding saproxylic invertebrate faunas. Few custodians of our ancient woodlands appreciate the complexity or the diversity of the dead-wood habitat. T h e survival of invertebrate assemblages associated with decay depends on the continuity of specific conditions of micro-habitat. It is not simply a case of dead-wood invertebrates feeding on rotting logs as the Caterpillar of the cabbage white feeds on a cabbage leaf! More likely, precise conditions of humidity will be required for the development of a particular kind of fungal decay required to Support the larval development of a rare beetle on which another, even rarer, species preys. The conditions required for the survival of many dead-wood invertebrate assemblages are only maintained in Standing timber, particularly over the period between a tree's maturity and death. T h e slow decay of the heartwood provides a long succession of suitable micro-habitats. It is this succession and interdependence of species in the cycle of decay that results in the survival of invertebrate assemblages at certain key sites rather than the survival of individual species at various different sites.

The publication of a tentative list of 196 mainly saproxylic Coleoptera associated with dead-wood habitats in pasture-woodlands (Harding & Rose, 1986) has renewed interest in the value of dead-wood Coleoptera as indicators of habitat continuity. Species in the list are grouped according to the extent to which they have been consistently recorded in areas of ancient woodland with continuity of dead-wood habitats: ' G r o u p 1: Species which are known to have occurred in recent times only in areas believed to be ancient woodland, mainly pasture-woodland. G r o u p 2: Species which occur mainly in areas believed to be ancient woodland with abundant dead-wood habitats, but which also appear to have been recorded from areas that may not be ancient or for which the locality data are imprecise. G r o u p 3: Species which occur widely in wooded land, but which are collectively characteristic of ancient woodland with dead-wood habitats.' An analysis of the occurrence of these dead-wood beetles in Suffolk highlighted three areas: Staverton Park and Thicks which is now well documented (Welch & Harding, 1974; Welch, 1986), Shrubland Park and surrounds, thanks to the recording efforts of Mr. D. R. Nash (County Recorder for Coleoptera) and the Icklingham Plains. That the Icklingham Plains should feature in this trio is most surprising as there is no obvious history of dead-wood continuity. Indeed, the area is best known for its quality Breckland flora and fauna. Situated on the north side of the valley of the River Lark opposite Cavenham Heath National Nature Reserve which lies to the south of the river, the Icklingham Plains may be regarded as 'typical' Breckland with scattered groups and individual trees, most of which appear to have been planted. Of particular interest for dead-wood Coleoptera are the Black Poplars, Populus nigra L. and the Grey Poplars, Populus x canescens (Ait.) Sm. I visited the site with Mr. E. Milne-Redhead on 7th April 1989 and we counted 13 living Black Poplars and found a further nine stumps. They appear to be roughly the same age and from one sawn trunk we estimated that they were about 200 years old. All the trees are males and Mr. Milne-Redhead (pers. comm.) is of the opinion that they are most likely a clone planted at about the same time. The heart-wood of the Grey Poplars which have proved to be even more entomologically rieh than the Black Poplars is so rotten that the older trees can not be easily aged. Grey Poplar is now thought to be a hybrid between White Poplar, Populus alba L. and Aspen, Populus tremula L. (Meikle, 1975) and there is little doubt that Icklingham's Grey Poplars were also planted. A n o t h e r interesting feature of the area is the way the Breckland abruptly gives way to wet meadow, fenland and alder carr along the flood piain of the River Lark. Although there has not been any systematic survey of dead-wood Coleoptera of the Icklingham Plains, it is already clear that the area supports a nationally important Coleoptera fauna. The following list of recorded species f r o m Groups 1 - 3 above (marked AW1, A W 2 or AW3 respectively) has been compiled entirely from post-1977 records. All those records not

M Y C E T O P H A G I D A E - Pseudotriphyllus suturalis (F.) [AW3]. Mycetophagus populi F. and M. quadriguttatus MĂźller, two other rarities, are also found on the Icklingham Plains. C O L Y D I I D A E - Synchita humeralis (F.) [AW3]; Bitoma crenata (F.) [AW3], T E N E B R I O N I D A E - Prionychus ater (F.) [AW3]; Mycetochara humeralis (F.) [AW3]. T E T R A T O M I D A E - Tetratomafungorum F. [AW3]. M E L A N D R Y I D A E - "Anisoxya fuscula (Iiiiger) [ A W 3 : R D B 3 ] - beaten from G r e y Poplar (TL7573), lĂś.vii. 1983; Conopalpus testaceus (Olivier) [AW3], S C R A P T I I D A E - *Scraptia testacea Allen [AW1] - beaten f r o m Alder, Alnusglutinosa (L.) G a e r t n . (TL7573), 29.vii.1981 ( l a t e r r e a r e d o u t o f o l d nest material from hollow Grey Poplar). C E R A M B Y C I D A E - Strangalia quadrifasciata L. [AW3], C U R C U L I O N I D A E - Cossonus parallelepipedus (Herbst) [AW3]. Rhyncolus truncorum (Germar) occurs in the hollow Grey Poplars. Very scarce in Suffolk, though not especially rare nationally, this woodboring species seems to produce suitable conditions and provide food for much rarer saproxylics. S C O L Y T I D A E - Trypophloeus asperatus (Gyllenhal) [RDB3] (Nash, 1984). The saproxylic beetle fauna of the Icklingham Plains shows all the characteristics one would expect of a classic pasture-woodland site, as described by Harding and Rose (1986). Alexander (1988) has used the list of 196 Coleoptera in this work to calculate an 'Index of Ecological Continuity'. H e suggests that index values of 20 or more appear to identify the outstanding assemblages, the important sites of the national series. Following Alexander, the Coleoptera listed in this paper for the Icklingham Plains score an index value of 36: a nationally important site. The continuity of habitat and management history which can usually be demonstrated for pasture-woodland sites seem to be absent. How the Icklingham Plains area has retained or developed such an important fauna is something of a mystery. Although there has not been time for any exhaustive historical research, the indications are that there is no long history of woodland continuity in the normal sense. H o w e v e r , there most likely has been a long succession dead-wood associated with the ancient willows, poplars and alders of the fenland and fen/ Breckland interface in the flood piain of the River Lark. It is particularly interesting that the most likely origin of this nationally important assemblage of dead-wood Coleoptera is not woodland but fenland and fen edge habitat. It seems likely that other dead-wood assemblages with similar origins await discovery, and it would be valuable to know it the Icklingham Plains are equally rieh in other invertebrate groups associated with dead wood. There may well be implications for fenland management where current practice, in many areas, dictates the removal of all trees and developing scrub. The succession of micro-habitats necessary to Support the dead-wood

Coleoptera recorded from the Icklingham Plains is in danger of Coming to an abrupt end, but this is not inevitable. The dead-wood resource of the Plains should be considered in conjunction with the adjacent areas of alder carr and fen, including the scattered ancient willows on both sides of the River Lark. In the long term, the management of Cavenham Heath N N R , to the south of the River Lark may be vitally important for the preservation of this deadwood fauna. To maintain the succession, consideration should be given to planting more Grey and Black Poplars on the Icklingham Plains and all dead-wood, particularly dead Standing trees, should be left to decay in situ and not removed. Acknowledgements The Icklingham Plains area of the Elveden Estate is strictly private. For access and permission to collect Coleoptera, I thank the Earl of Iveagh and the Estate Manager, Mr. W. M. Sloan. I am most grateful to Mr. D. R. Nash for allowing me to include his unpublished records and for pointing out species in my list not previously recorded from Suffolk. References Alexander, K. N. A . (1988). The development of an index of ecological continuity for deadwood associated beetles. In: Welch, R. C. (1988). Insect indicators of ancient woodland. Antenna, 12, 69. Elliott, E. A . (1936). Critical notes on our beetles. Trans. Suffolk Nat. Soc., 3,121. H a m m o n d , P. M. (1982). Cymindis macularis (Fischer v. Waldheim) (Col., C a r a b i d a e ) - a p p a r e n t l y a British species. Entomologist's mon. Mag., 118, Harding, P. T. & Rose, F. (1986). Pasture-woodlands in lowland Britain. Abbots Ripton: Institute of Terrestrial Ecology. Meikle, R. D . (1975). Populus L. In: Stace, C. A. (1975). Hybridisation and theflora ofthe British Isles. London: Academic Press. Mendel, H . (1979). Additions to and comments on the Suffolk list of Anobiidae (Coleoptera). Trans. Suffolk Nat. Soc., 18. 94. Mendel, H . (1980). Notes on Suffolk Carabidae (Coleoptera) including two species new to the county list. Trans. Suffolk Nat. Soc., 18,141. Mendel, H . (1982). Hemicoelus nitidus (Hbst.) (Col., Anobiidae) new to Britain. Entomologist's mon. Mag., 118,226. Mendel, H . (1983). Beetles (Coleoptera) new to Suffolk. Trans. Suffolk Nat. Soc., 19,337. Mendel, H. (1985). Trixagus brevicollis (de Bonvouloir) (Col., Throscidae) in Britain. Entomologist's mon. Mag., 121, 58. Nash, D. R. (1980). Notes on the Suffolk list of Coleoptera: 2 - L a t h r i d i i d a e . Trans. Suffolk Nat. Soc., 18, 134. Nash, D. R. (1984). Notes on the Suffolk list of Coleoptera: 4, Scolytidae. Trans. Suffolk Nat. Soc., 20, 32.