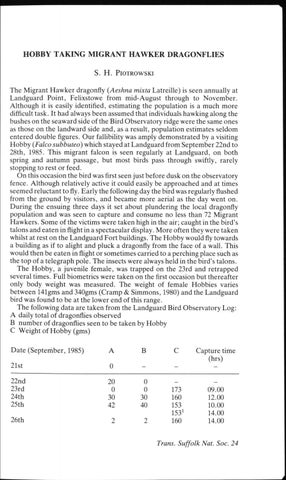 The Migrant Hawker dragonfly (Aeshna mixta Latreille) is seen annually at Landguard Point, Felixstowe from mid-August through to November. Although it is easily identified, estimating the population is a much more difficult task. It had always been assumed that individuals hawking along the bushes on the seaward side of the Bird Observatory ridge were the same ones as those on the landward side and, as a result, population estimates seldom entered double figures. Our fallibility was amply demonstrated by a visiting Hobby (Falco subbuteo) which stayed at Landguard from September 22nd to 28th, 1985. This migrant falcon is seen regularly at Landguard, on both spring and autumn passage, but most birds pass through swiftly, rarely stopping to rest or feed. On this occasion the bird was first seen just before dusk on the observatory fence. Although relatively active it could easily be approached and at times seemed reluctant to fly. Early the following day the bird was regularly flushed from the ground by visitors, and became more aerial as the day went on. During the ensuing three days it set about plundering the local dragonfly population and was seen to capture and consume no less than 72 Migrant Hawkers. Some of the victims were taken high in the air; caught in the bird's talons and eaten in flight in a spectacular display. More often they were taken whilst at rest on the Landguard Fort buildings. The Hobby would fly towards a building as if to alight and pluck a dragonfly from the face of a wall. This would then be eaten in flight or sometimes carried to a perching place such as the top of a telegraph pole. The insects were always held in the bird's talons. The Hobby, a juvenile female, was trapped on the 23rd and retrapped several times. Full biometrics were taken on the first occasion but thereafter only body weight was measured. The weight of female Hobbies varies between 141gms and 340gms (Cramp & Simmons, 1980) and the Landguard bird was found to be at the lower end of this range. The following data are taken from the Landguard Bird Observatory Log: A daily total of dragonflies observed B number of dragonflies seen to be taken by Hobby C Weight of Hobby (gms) Date (September, 1985)

In the hand the Hobby was extremely docile and showed no signs of aggression. On release it seemed reluctant to leave its handler. The bird consistently lost weight and on the 25th was force-fed with 13gms of raw meat. During the afternoon it perked up considerably and began catching dragonflies, once again, with great vigour. This recovery was short-lived and the following day it had again lost weight and this coincided with a marked change in the weather. From the 21st the weather had been warm with south or south-westerly winds but from the 26th the wind moved to the south-east, bringing in sea mist and lowering the temperature. On the 27th and 28th thick fog prevailed throughout most of the day and no dragonflies were seen. During this period the Hobby weakened considerably. It spent most of the time perched and early on the 28th was found on the ground where it could be approached almost within touching distance. At mid-day it was seen to topple from its perch and became lodged amongst the lower branches of a bush. It was taken into care but despite further force-feeding died the same evening. There was much speculation about the origin of this Hobby. Its extreme tameness and easy handling led some observers to consider it may have spent some time in captivity. Others were of the opinion that the bird was a genuine migrant which arrived in an exhausted condition and had been unable through inexperience, to replenish its reserves in spite of its ability to catch dragonflies. On one occasion, whilst being examined, it regurgitated a pellet which entirely consisted of dragonfly remains. Reference Cramp, S â&#x20AC;&#x17E; and Simmons, K. E . L. (1980). The birds of the Palearctic. Vol. 2. Oxford. S. H. Piotrowski 18 Cobham Road Ipswich IP3 9JD.