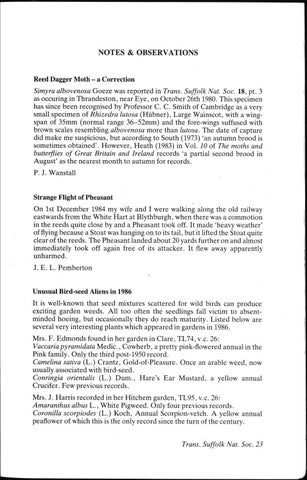 Reed Dagger Moth - a Correction Simyra albovenosa Goeze was reported in Trans. Suffolk Nat. Soc. 18, pt. 3 as occuring in Thrandeston, near Eye, on October 26th 1980. This specimen has since been recognised by Professor C. C. Smith of Cambridge as a very small specimen of Rhizedra lutosa (Hübner), Large Wainscot, with a wingspan of 35mm (normal ränge 36-52mm) and the fore-wings suffused with brown scales resembling albovenosa more than lutosa. The date of capture did make me suspicious, but according to South (1973) 'an autumn brood is sometimes obtained'. However, Heath (1983) in Vol. 10 of The moths and butterflies of Great Britain and Ireland records 'a partial second brood in August' as the nearest month to autumn for records. P. J. Wanstall

Strange Flight of Pheasant On Ist December 1984 my wife and I were Walking along the old railway eastwards from the White Hart at Blythburgh, when there was a commotion in the reeds quite close by and a Pheasant took off. It made 'heavy weather' of Aying because a Stoat was hanging on to its tail, but it lifted the Stoat quite clear of the reeds. The Pheasant landed about 20 yards further on and almost immediately took off again free of its attacker. It flew away apparently unharmed. J. E. L. Pemberton

Unusual Bird-seed Aliens in 1986 It is well-known that seed mixtures scattered for wild birds can produce exciting garden weeds. All too often the seedlings fall victim to absentminded hoeing, but occasionally they do reach maturity. Listed below are several very interesting plants which appeared in gardens in 1986. Mrs. F. Edmonds found in her garden in Cläre, TL74, v.c. 26: Vaccaria pyramidata Medic., Cowherb, a pretty pink-flowered annual in the Pink family. Only the third post-1950 record. Camelina sativa (L.) Crantz, Gold-of-Pleasure. Once an arable weed, now usually associated with bird-seed. Conringia orientalis (L.) Dum., Hare's Ear Mustard, a yellow annual Crucifer. Few previous records. Mrs. J. Harris recorded in her Hitchem garden, TL95, v.c. 26: Amaranthus albus L., White Pigweed. Only four previous records. Coronilla scorpiodes (L.) Koch, Annual Scorpion-vetch. A yellow annual peaflower of which this is the only record since the turn of the Century.

About eight years ago I noticed a seedling Arum growing under a pear tree in my Ipswich garden. I was not surprised as I had already several wellestablished plants of the unspotted variety of the Common Wild Arum, Arum maculatum L., all from bird-sown seeds. This seedling developed very slowly, but I noticed that the new leaves appeared in the late autumn and not in January as was the case with my other Arums. Its leaves were also larger and unspotted, with longer stalks. They were not sharply arrow-shaped or with very conspicuous white veins as seen in the Italian Arum, A. italicum Mill. ssp. italicum, which occurs in Suffolk. It flowered for the first time at the end of May, 1986, a month later than my other garden Arums. My plant is almost identical with those I had seen a few days earlier in Jersey, and which were identified as A. italicum Mill. ssp. neglectum (Townsend) Prime. This Arum is native or naturalised also along the south coast of England. How did my plant arrive? Perhaps from a bird-sown seed during migration? My previous visit to Jersey was back in 1937. F. W. Simpson. A New Hybrid Symphytum There are three species of Comfrey, Symphytum, in my garden. S. Orientale L., with white flowers, S. caucasicum Bieb., with light blue flowers and S. ibiricum Steven, with pale creamy flowers and red tips to the buds. Six years ago among seedlings was one plant which was different from any of the three species. The leaves twice as long as those of S. ibiricum and very hairy like those of the other two species. When flowering it did not develop tall upright stems, nor the long creeping stems of S. ibiricum. The plant remained prostrate and increased by short rooting and flowering runners. The flowers were very similar to those of S. ibiricum but slightly larger, and it had red-tipped buds. At first I considered it a hybrid between S. Orientale and S. ibiricum, until 1986 when some of the flowers were very pale blue. A very similar plant with light blue flowers appeared in Mrs. E. M. Hyde's garden at Woolverstone among plants I had supplied. This was determined by Dr. A. C. Leslie as the hybrid S. caucasicum x S. ibiricum. F. W. Simpson

Surely not NOISY Fungi? An evening walk with the Bury Naturalists in some parkland at Nowton (recently purchased by St. Edmundsbury Council) on l l t h June, 1986, produced few interesting fungi. Most came in the category 'little brown jobs', i.e. those that can only be identified by experts, although in a meadow we found a few attractive Conical Wax Caps, Hygrocybe conica (Scop. ex Fr.) Kummer, which are yellow-orange but go black with age or bruising. However, some fresh specimens of the very common Jew's Ear Fungus, Auricularia auricula-judae St. Amans, made the evening memorable for me. I was persuaded by the Society's Secretary, Mrs Gertrude Townsend, to try cooking some for my supper. She warned me what would happen, but I thought she was doing so with her tongue in her cheek. These wrinkled, gelatinous, ear-shaped fungi, tan brown on the upper surface and greyish on the inner, lower surface, hardly look appetizing, and their texture is positively revolting, but they are always said to be 'edible', and a related species, Auriculariapolytricha, is cultivated on oak saplings by the Chinese for consumption. My wife put some into a frying pan with hot fat for me. They rapidly inflated and gave out a high pitched 'eeeeh', lasting at least two minutes. It really sounded as if they were objecting to being cooked. I could hear this f r o m outside the kitchen. Clearly each fungus had separated into two layers, forming a gas-filled bag. These then ruptured, and the escaping gas made a noise in the same way as children can do by inflating a rubber balloon and letting it go suddenly. Not only do these fungi 'scream', but I do not think they taste good either. I threw most away. G. D. Heathcote

A Stoat in Ermine On Ist March, 1986, while bird-watching at Lackford gravel pits, I encountered a stoat in winter ermine (during a period of snow cover). It had a beautiful long coat, all white with the exception of a small dark smudge on the muzzle just below eye level (and, of course, the dark bushy tip to the tail). The rear quarters had a yellowish tinge against the background of snow. The same animal was seen again several times during the following two weeks, often giving close views, being last seen on 15th March when snow was fast disappearing and it was therefore very conspicuous. Colin J. Jakes [Stoats in ermine are evidently not common in Suffolk but there are previous records, including the following: a series of seven, in all stages of moult through to pure white, captured 'in the autumn and winter of 1903' at Eriswell (J. G. Millais, 1905, The mammals of Great Britain and Ireland, 2, p. 110), and several records from the Transactions: one in 'white winter dress' seen on the marsh near Butley Ferry on 13th March, 1930; 'an albino' (!) taken at Abbots Hall, Stowmarket, in December 1937; one 'totally white excepting the black tail' seen in January 1938 (despite 'the extreme mildness of December and January this winter'), and one in December 1938, 'pure white', at Butley. In the early 1980s there were reports of stoats showing white winterpelage from Campsea Ash, Benacre, H e n h a m Park and Orford, together with an unusual specimen seen near Barnby on 16th July, 1982, which 'still had pure white colour to the front of its body and normal brown summer pelage on its back half together with a black tip to the tail' (Trans. Suffolk Nat. Soc., 4, 98, Proc. xxi; 18, 319; 19, 394). Research has shown that the assumption of white dress, rather than brown, and a rapid coat change are both responses to low temperature before or during the period of autumn moult in N o v e m b e r - D e c e m b e r ; the white coat will then be kept until the spring moult. Moreover, once facilitated in one year, the white coat may be assumed in the next regardless of temperature (L. H . Matthews (1952), British Mammals, pp. 225-6). Can the Suffolk observations be correlated with weather records in the autumn moulting period of any of the years in question? (Cranbrook)] Bursaries Members are reminded that the Society can award bursaries to support students, both young and old, in carrying out surveys of plants or animals, or studying the ecological requirements of a species. Students awarded a Morley or Cranbrook bursary are required to prepare a report on completion of the work in a form suitable for publication. Bursary application forms can be obtained from the Secretary.

BSBI Monitoring Scheme The Botanical Society of the British Isles has launched a monitoring scheme to assess losses and gains in thefloraof the British Isles in the 25 years since the publication of the Atlas of the British Flora in 1962. Many changes have occurred and it was feit that more information was urgently needed. Monitoring will take place in 1987-8 and will consist of species recording and optional habitat surveys. One in nine of the 10km squares in the British Isles will be sampled. In addition, three tetrads (2 x 2km squares) within each 10km Square will be surveyed, separately and in greater detail. These tetrads will be A, J and W throughout. It is hoped that habitat surveys will be made in some of these tetrads, as well as in other parts of the 10km squares. Careful note will be taken of the route followed during recording, so that return visits to rare or local species may be made in the future, if necessary. Recording is already under way in Suffolk. BSBI members and other botanists are working in squares TM05, 35, and 38 and TL75 and 78. Much useful information and experience will be gained, upon which, it is hoped, a new Atlas will be built in the 1990's. Reference Perring, F. H. & Walters, S. M. (1962). Atlas ofthe British Flora, London. E. M. Hyde

Suffolk Pseudoscorpions - a Correction to the Suffolk List Neobisum carpenteri (Kew) was added to the Suffolk list on the strength of a female specimen from Shingle Street, identified by Mr. P. E. Jones (Mendel, 1981). The specimen has recently been re-examined by Mr. R. E. Jones and found to be Roncus lubricus L. Koch. N. carpenteri must, therefore, be removed from our county list and R. lubricus is confirmed as a Suffolk species. Reference Mendel, H. (1981). A review of Suffolk Pseudoscorpions. Trans. Suffolk Nat. Soc., 18,226. Howard Mendel