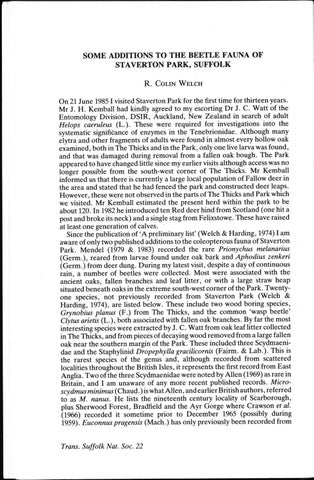 On 21 June 19851 visited Staverton Park for the first time for thirteen years. Mr J. H. Kemball had kindly agreed to my escorting Dr J. C. Watt of the Entomology Division, DSIR, Auckland, New Zealand in search of adult Helops caeruleus (L.). These were required for investigations into the systematic significance of enzymes in the Tenebrionidae. Although many elytra and other fragments of adults were found in almost every hollow oak examined, both in The Thicks and in the Park, only one live larva was found, and that was damaged during removal from a fallen oak bough. The Park appeared to have changed little since my earlier visits although access was no longer possible from the south-west corner of The Thicks. Mr Kemball informed us that there is currently a large local population of Fallow deer in the area and stated that he had fenced the park and constructed deer leaps. However, these were not observed in the parts of The Thicks and Park which we visited. Mr Kemball estimated the present herd within the park to be about 120. In 1982 he introduced ten Red deer hind from Scotland (one hit a post and broke its neck) and a single stag from Felixstowe. These have raised at least one generation of calves. Since the publication o f ' A preliminary list' (Welch & Harding, 1974) I am aware of only two published additions to the coleopterous fauna of Staverton Park. Mendel (1979 & 1983) recorded the rare Prionychus melanarius (Germ.), reared from larvae found under oak bark and Aphodius zenkeri (Germ.) from deer dung. During my latest visit, despite a day of continuous rain, a number of beetles were collected. Most were associated with the ancient oaks, fallen branches and leaf litter, or with a large straw heap situated beneath oaks in the extreme south-west corner of the Park. Twentyone species, not previously recorded from Staverton Park (Welch & Harding, 1974), are listed below. These include two wood boring species, Grynobius planus (F.) from The Thicks, and the common 'wasp beetle' Clytus arietis (L.), both associated with fallen oak branches. By far the most interesting species were extracted by J. C. Watt from oak leaf litter collected in The Thicks, and from pieces of decaying wood removed from a large fallen oak near the southern margin of the Park. These included three Scydmaenidae and the Staphylinid Dropephylla gracilicornis (Fairm. & Lab.). This is the rarest species of the genus and, although recorded from scattered localities throughout the British Isles, it represents the first record from East Anglia. Two of the three Scydmaenidae were noted by Allen (1969) as rare in Britain, and I am unaware of any more recent published records. Microscydmus minimus (Chaud.) is what Allen, and earlier British authors, referred to as M. nanus. He lists the nineteenth Century locality of Scarborough, plus Sherwood Forest, Bradfield and the Ayr Gorge where Crawson et al. (1966) recorded it sometime prior to December 1965 (possibly during 1959). Euconnuspragensis (Mach.) has only previously been recorded from

SOME ADDITIONS TO THE BEETLE FAUNA OF STA VERTON PARK, SUFFOLK

Windsor Forest, associated with the ant Lasius brunneus (Latr.), a species not known to occur at Staverton. However, Franz and Besuchet (1971) imply that it is found with other species of Lasius on the continent. The remaining additions were all sieved from the straw heap. By far the most numerous species present was Anthicus formicarius (Goeze). In a letter to P. T. Harding in March 1974, D. R. Nash stated that he had checked C. S. Barham's specimens Standing over A. quisquilius Th. (= formicarius) and found them all to be A. floralis (L.). Indeed at that time he comments that neither of them had recorded that species from Suffolk. Over fifty specimens were collected during this visit, many of which were uniformly dark in colour, but dissection of the males confirmed their identity. The occurrence of a Single specimen of Oryzaephilus surinamensis (L.) is noteworthy. This species, 'The saw-toothed grain beetle', is a cosmopolitan pest of stored cereals and is commonly found in grain stores and warehouses. I do not know of any other 'outdoor' record for this species in Britain. However, its presence in the Park was doubtless due to the fact that the straw heap, in which it had been introduced, was heating up in the centre. It is unlikely that O. surinamensis will be able to survive the winter in such a Situation. Cryptolestes ferrugineus (Steph.), on the other hand, although also a common pest of stored cereals, has been recorded from a variety of outdoor habitats, including hay stacks. In the following list nomenclature follows Kloet and Hincks (1977). Histeridae Carcinopspumilio

SOME ADDITIONS TO THE BEETLE FAUNA OF STA VERTON PARK, SUFFOLK

Some additions to the beetle fauna of Staverton Park, Suffolk

Some additions to the beetle fauna of Staverton Park, Suffolk