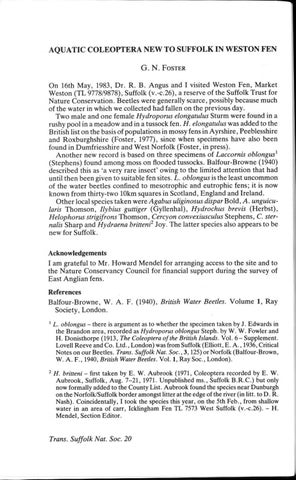 On 16th May, 1983, Dr. R. B. Angus and I visited Weston Fen, Market Weston (TL 9778/9878), Suffolk (v.-c.26), a reserve of the Suffolk Trust for Nature Conservation. Beetles were generally scarce, possibly because much of the water in which we collected had fallen on the previous day. Two male and one female Hydroporus elongatulus Sturm were found in a rushy pool in a meadow and in a tussock fen. H. elongatulus was added to the British list on the basis of populations in mossy fens in Ayrshire, Peeblesshire and Roxburghshire (Foster, 1977), since when specimens have also been found in Dumfriesshire and West Norfolk (Foster, in press). Another new record is based on three specimens of Laccornis oblongus1 (Stephens) found among moss on flooded tussocks. Balfour-Browne (1940) described this as 'a very rare insect' owing to the limited attention that had until then been given to suitable fen sites. L. oblongus is the least uncommon of the water beetles confined to mesotrophic and eutrophic fens; it is now known from thirty-two 10km squares in Scotland, England and Ireland. Other local species taken were Agabus uliginosus dispar Bold, A. unguicularis Thomson, Ilybius gĂźltiger (Gyllenhal), Hydrochus brevis (Herbst), Helophorus strigifrons Thomson, Cercyon convexiusculus Stephens, C. sternalis Sharp and Hydraena britteni2 Joy. The latter species also appears to be new for Suffolk. Acknowledgements I am grateful to Mr. Howard Mendel for arranging access to the site and to the Nature Conservancy Council for financial support during the survey of East Anglian fens. References Balfour-Browne, W. A. F. (1940), British Water Beetles. Volume 1, Ray Society, London. 1

Horn-tails and ichneumonid parasites On 22nd June, 1983, my neighbour, Mrs. Joan Galwey, brought me an ichneumonflywhich I thought was a female Rhyssa persuasoria (L.), which parasitises Sirexgigas L. I exhibited it, together with a specimen of its host, at the annual exhibition of the British Entomological and Natural History Society where it was seen by Dr. Mark Shaw of the Royal Scottish Museum, Edinburgh. He thought it was not R. persuasoria, and eventually identified it as Dolichmitus mesocentrus (Gravenhorst), another ichneumonid within the Pimplinae, although in another tribe. As they had no specimen of D. mesocentrus in his museum I donated this one and was sent a genuine R. persuasoria in exchange. D. mesocentrus is known to parasitise wood-borin insect larvae, probably of beetles in the Cerambycidae (longhorn beetles) and maybe also lepidoptera like Sesiidae (clearwings). The female S. gigas, the greater horn-tail (commonly called the woodwasp because of its yellow and black striped body and sting-like ovipositor) bores holes infirtrees with its strong ovipositor and deposits her eggs therein. On hatching these produce whitish, six-legged larvae which spend the next few years (seldom less than two years) boring tunnels and eating the wood so displaced. When the female R. persuasoria (whose scientific name can be translated as 'persuasive burglar') is looking for somewhere to lay her eggs she seeks out a tunnel containing a Sirex larva, and with her very long ovipositor deposits an egg in the tunnel. The resulting larva eventually hatches out and proceeds to feed on the Sirex larva. There is another very small parasite which may creep into the burrow and feed upon the Rhyssa larva. As in the old proverb - 'Littlefleashave lesserfleasupon their back to bite 'em, and these in turn have lesserfleas,and so ad infinitum.' H. E. Chipperfield, Walberswick. Trans. Suffolk Nat. Soc. 20