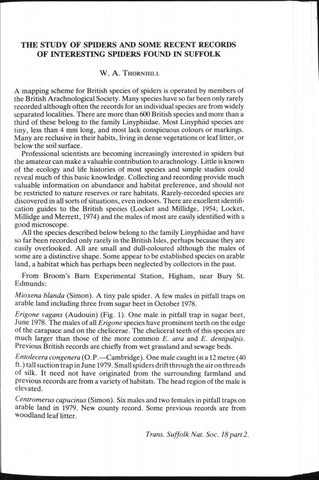 A mapping scheme for British species of spiders is operated by members of the British Arachnological Society. Many species have so far been only rarely recorded although often the records for an individual species are from widely separated localities. There are more than 600 British species and more than a third of these belong to the family Linyphiidae. Most Linyphiid species are tiny, less than 4 mm long, and most lack conspicuous colours or markings. Many are reclusive in their habits, living in dense vegetations or leaf litter, or below the soil surface. Professional scientists are becoming increasingly interested in spiders but the amateur can make a valuable contribution to arachnology. Little is known of the ecology and life histories of most species and simple studies could reveal much of this basic knowledge. Collecting and recording provide much valuable information on abundance and habitat preference, and should not be restricted to nature reserves or rare habitats. Rarely-recorded species are discovered in all sorts of situations, even indoors. There are excellent identification guides to the British species (Locket and Millidge, 1954; Locket, Millidge and Merrett, 1974) and the males of most are easily identified with a good microscope. All the species described below belong to the family Linyphiidae and have so far been recorded only rarely in the British Isles, perhaps because they are easily overlooked. All are small and dull-coloured although the males of some are a distinctive shape. Some appear to be established species on arable land, a habitat which has perhaps been neglected by collectors in the past. From Broom's Barn Experimental Station, Higham, near Bury St. Edmunds: Mioxena blanda (Simon). A tiny pale spider. A few males in pitfall traps on arable land including three from sugar beet in October 1978. Erigone vagans (Audouin) (Fig. 1). One male in pitfall trap in sugar beet, June 1978. The males of all Erigone species have prominent teeth on the edge of the carapace and on the chelicerae. The cheliceral teeth of this species are much larger than those of the more common E. atra and E. dentipalpis. Previous British records are chiefly from wet grassland and sewage beds. Entolecera congenera (O.P.â&#x20AC;&#x201D;Cambridge). One male caught in a 12 metre (40 ft.) tall suction trap in June 1979. Small spiders drift through the air on threads of silk. It need not have originated from the surrounding farmland and previous records are from a variety of habitats. The head region of the male is elevated. Centromerus capucinus (Simon). Six males and two females in pitfall traps on arable land in 1979. New county record. Some previous records are from woodland leaf litter. Trans. Suffolk Nat. Soc. 18 part2.