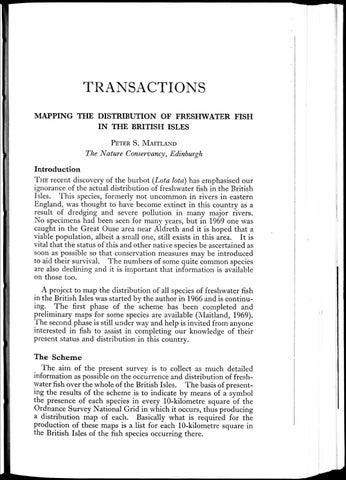 TRANSACTIONS MAPPING THE DISTRIBUTION OF FRESHWATER FISH IN THE BRITISH ISLES PETER S . M A I T L A N D

Introduction THE recent discovery of the burbot (Lota Iota) has emphasised our ignorance of the actual distribution of freshwater fish in the British Isles. T h i s species, formerly not uncommon in rivers in eastern England, was thought to have become extinct in this country as a result of dredging and severe pollution in many major rivers. No specimens had been seen for many years, but in 1969 one was caught in the Great Ouse area near Aldreth and it is hoped that a viable population, albeit a small one, still exists in this area. It is vital that the status of this and other native species be ascertained as soon as possible so that conservation measures may be introduced to aid their survival. T h e numbers of some quite common species are also declining and it is important that information is available on those too. A project to map the distribution of all species of freshwater fish in the British Isles was started by the author in 1966 and is continuing. T h e first phase of the scheme has been completed and preliminary maps for some species are available (Maitland, 1969). T h e second phase is still under way and help is invited from anyone interested in fish to assist in completing our knowledge of their present status and distribution in this country.

The Scheme T h e aim of the present survey is to collect as much detailed information as possible on the occurrence and distribution of freshwater fish over the whole of the British Isles. T h e basis of presenting the results of the scheme is to indicate by means of a Symbol the presence of each species in every 10-kilometre Square of the Ordnance Survey National Grid in which it occurs, thus producing a distribution map of each. Basically what is required for the production of these maps is a list for each 10-kilometre Square in the British Isles of the fish species occurring there.

The National Grid is shown on most recent British Ordnance Survey maps; probably the best maps to consult for the present scheme are the 1 mile to 1 inch, 4 miles to 1 inch, or 10 miles to 1 inch (Route Planning Map), all of these maps indicate the 10kilometre squares clearly. Many explain also how to calculate the National Grid Reference for each place. Several other maps may be found useful. It should be noted that the Irish Grid differs from that covering other parts of the British Isles and anyone wishing to quote grid references from Ireland should contact the author beforehand. The information on the distribution of fish species in any locality is recorded on Standard Cards which, after processing at the Biological Records Centre of the Nature Conservancy, can be automatically sorted to produce the required maps or other relevant information. There are two types of card available for recording information—Individual and Regional Record Cards. Individual Record Cards These are small cards which are punched directly for use in the sorting machinery and they should be kept in as good a condition as possible. Normally they should only be used for rare species or odd records of species in any one 10-kilometre Square. The items to be filled in are mostly self-explanatory—e.g. («) Left-hand Side: Species (see list on regional record card), Locality (name of water concerned and a nearby town or landmark), Habitat (type of water). (b) Right-hand Side: Date (e.g. 23 August 1966 12 13 1 - 1 8 1", , , , , = -j j j 9 | fj | 6 | >' ^ t a t u s (introduced, extinct, rare, abundant, etc.), Vice-County, Altitude, Coli, (name of collector), Det. (name of person counterchecking difficult species), Source (used in the case of old records extracted from museum collections, notebooks, etc.). (c) Top Margin: Grid Reference (8 spaces are provided here: e.g. a füll reference— | 3 | 6 | 4 | 5 | 4 | 7 | 6 | 8 | ; a 1-kilometre Square— | 3 | 6 | 4 | 5 | - [ 7 | 6 | - | ; a 10-kilometre Square— |3 | 6 | 4 | - | - | 7 | - | ~ | ) . Recorder's Name (fill in space in top right-hand corner. Regional Record Cards These list most of the freshwater fish species found in the British Isles; Space is also provided for other species and hybrids. The items to be filled in are self-explanatory: a tick should be marked opposite the name of each species known to be present in the area under consideration. These cards may be used in two ways: (a) For all the species known definitely to occur at the time in one particular 10-kilometre Square. Such a card for the whole

Square should carry only the 10-kilometre grid reference (4 figures) and no information on habitat, altitude, etc. (b) For specific waters within any one 10-kilometre square; such cards should be given a precise locality, a more detailed grid reference (6 or 8 figures), and data on habitat and altitude. 'Tear off' copies of regional record cards are printed at the end of this paper: each has the list of Freshwater Fish species back and front, and the two can cater for four squares or four localities. Verification For record purposes the fish fall into three categories: (a) Easily recognised species which do not require additional verification. (b) Less easily recognised species which require additional verification. Such species are denoted by a single star * after the common name and must be verified by the local Fisheries Officer or his equivalent before the record can be accepted. (c) Difficult or very rare species whose identification must be verified by a specialist. Such species are denoted by a double star ** after the common name and records are acceptable only after verification by a recognised specialist. Normally all such specimens should be preserved and sent either to: Dr. Peter S. Maitland, The Nature Conservancy, 12 Hope Terrace, Edinburgh 9, or to Mr. A. C. Wheeler, Department of Zoology, British Museum, Cromwell Road, London, S.W.7. When a fish has been verified the name of the verifier should be recorded in the appropriate place on the card. Preservation All specimens to be kept for further examination should be preserved as quickly as possible, for fish deteriorate very rapidly, especially in hot weather. The most useful preservative is 4% Formaldehyde, and each fish should be left in as natural a position as possible in this Solution for several days to ensure complete fixation. With large specimens (more than 30 cm. in length) a small slit should be made in the ventral body wall to ensure complete preservation internally. Another suitable preservative is 70% Alcohol; where neither Formaldehyde nor Alcohol are available quite reasonable preservation for short periods can be obtained with: (a) Methylated Spirits: 7 parts of spirits to 3 of water. (b) Salt: 1 part of salt to 2 of water. (c) Vinegar (Acetic Acid): as used as a condiment. It is not normally advisable to send fresh fish by post as they deteriorate too rapidly. When sending preserved specimens they should be drained of preservative, wrapped in damp muslin and sealed inside a polythene bag. If this is now placed in a box with packing and parcelled, the fish will travel for several days in perfect condition.

Anxiety may sometimes be feit in case the exact localities of rare species may be indicated. All records given in confidence will be published only when permission is available from the recorder to do so. In all cases only the 10-kilometre Square in which the species occurs will be indicated; where a species is so rare that to indicate its distribution would be dangerous, no map will be published. T h e basins of many large rivers and lakes often occupy more than one 10-kilometre Square. Although species of fish present in a water body in one Square are likely to be present in the same body in adjacent squares, this can by no means be taken for granted. It is important for the accuracy and detail of the maps to have actual records from as many squares as possible. There are about 3,500 10-kilometre squares altogether covering the British Isles. Many of them contain more than thirty different species of freshwater fish; others, especially those to the north and west of Ireland and Scotland, contain far fewer. In general, when recording three or less species from an individual Square it is best to use the individual record card, when recording more than three species to use the larger regional record card. Supplies of both types of card will gladly be sent to anyone who is prepared to help further with the scheme. Acknowledgements I am extremely grateful to all the people, too numerous to mention individually, who have generously helped me with this scheme so far. References Maitland, P. S. (1969). A preliminary account of the m a p p i n g of the distribution of freshwater fish in the British Isles. J. Fish. Biol. 1, 45-58. Maitland, P. S. (1970). A key for the identification of the freshwater fishes of the British Isles with notes on their ecology and distribution. Sei. Publ. Freshzv. Biol. Ass. (in press).

Mapping the Distribution of Freshwater Fish in the British Isles

Mapping the Distribution of Freshwater Fish in the British Isles