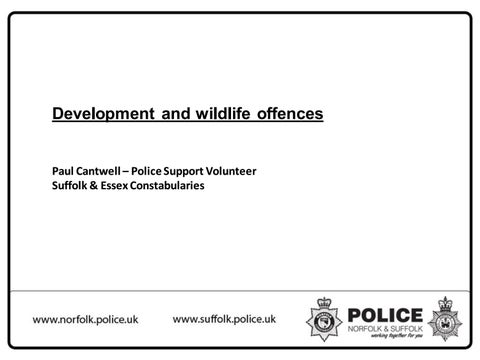 What Iâ&#x20AC;&#x2122;ll cover The role of the Police in relation to species and habitats in respect of development cases Some typical situations that we get referred to us

How cases are investigated and the powers that the Police have in relation to such cases • Varies by Force, but here in Suffolk… • Cases passed to the Rural Crime Team • Initial assessment – may involve me advising/checks with NE/LPA • Wildlife Crime Officer carries out investigation • Referred to Team’s Sergeant/Inspector • May result in no further action, referral to other agency/advice/restorative justice/caution/prosecution/POCA • Officers have powers of entry/seizure etc. and/or warrants

Case studies • An energy supply company, were fined £1,000 with £90 costs after pleading guilty to damaging or destroying a resting place of great crested newts at an electricity infrastructure site in Stansted Mountfitchet, Essex (2009). • The company had carried out an extension to their site following the construction of a new housing estate nearby without an ecological assessment. In 2006 a housing development company were convicted of a similar offence when they carried out works outside of the conditions of a licence issued to them by Natural England in respect of great crested newts at the site opposite.

On 8 March 2010 at Lowestoft Magistrates Court, a development company was fined £700 with £200 costs and a victim surcharge of £15 after pleading guilty to damaging or destroying a resting place of great crested newts at the construction site for a new Travelodge in Leisureway, Lowestoft

The owners of the land at Potters Kiln had employed professional consultant ecologists to carry out a wildlife survey and apply to Natural England for a licence to trap and move any great crested newts to a new reserve set up specially to take them on land immediately adjoining the site. This land is now owned and managed by the Suffolk Wildlife Trust

As part of the licenced trapping programme, a special amphibian-proof fence was erected around the entire site to help catch the newts but also to prevent them from returning to the site once they had been transferred to the adjacent site

â&#x20AC;˘ Natural England officers visited the site on 23 May 2008 following a complaint to find that the fence had been removed in some areas and damaged in others. This would allow newts to re-enter the site and potentially be killed or injured by the construction work which had already started on the site â&#x20AC;˘ The company pleaded guilty to damaging or destroying a resting place of great crested newts under the Habs Regs