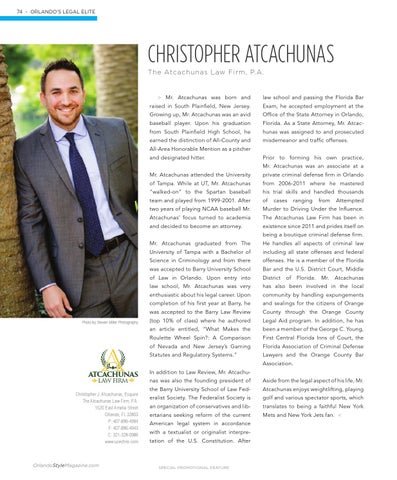 &gt; Mr. Atcachunas was born and

Exam, he accepted employment at the

Growing up, Mr. Atcachunas was an avid

Office of the State Attorney in Orlando,

baseball player. Upon his graduation

from South Plainfield High School, he

hunas was assigned to and prosecuted

earned the distinction of All-County and

All-Area Honorable Mention as a pitcher and designated hitter.

Prior to forming his own practice, Mr. Atcachunas was an associate at a

of Tampa. While at UT, Mr. Atcachunas

“walked-on” to the Spartan baseball

his trial skills and handled thousands

Murder to Driving Under the Influence.

The Atcachunas Law Firm has been in

and decided to become an attorney.

existence since 2011 and prides itself on

being a boutique criminal defense firm.

Mr. Atcachunas graduated from The

He handles all aspects of criminal law

University of Tampa with a Bachelor of

including all state offenses and federal

Science in Criminology and from there

offenses. He is a member of the Florida

was accepted to Barry University School

of Law in Orlando. Upon entry into

has also been involved in the local

enthusiastic about his legal career. Upon

completion of his first year at Barry, he

and sealings for the citizens of Orange

was accepted to the Barry Law Review

County through the Orange County

Legal Aid program. In addition, he has

an article entitled, “What Makes the

been a member of the George C. Young,

of Nevada and New Jersey’s Gaming

Lawyers and the Orange County Bar

In addition to Law Review, Mr. Atcachunas was also the founding president of

Aside from the legal aspect of his life, Mr.

golf and various spectator sports, which

an organization of conservatives and lib-

translates to being a faithful New York

ertarians seeking reform of the current

American legal system in accordance with a textualist or originalist interpretation of the U.S. Constitution. After