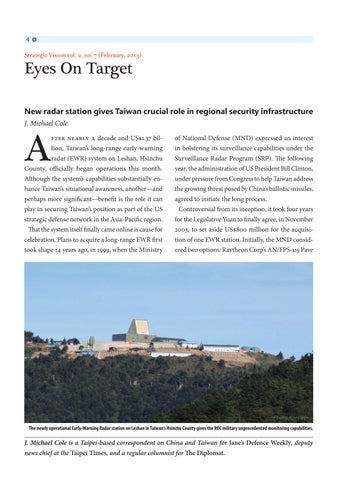 fter nearly a decade and US$1.37 billion, Taiwan’s long-range early-warning radar (EWR) system on Leshan, Hsinchu County, officially began operations this month. Although the system’s capabilities substantially enhance Taiwan’s situational awareness, another—and perhaps more significant—benefit is the role it can play in securing Taiwan’s position as part of the US strategic defense network in the Asia-Pacific region. That the system itself finally came online is cause for celebration. Plans to acquire a long-range EWR first took shape 14 years ago, in 1999, when the Ministry

of National Defense (MND) expressed an interest in bolstering its surveillance capabilities under the Surveillance Radar Program (SRP). The following year, the administration of US President Bill Clinton, under pressure from Congress to help Taiwan address the growing threat posed by China’s ballistic missiles, agreed to initiate the long process. Controversial from its inception, it took four years for the Legislative Yuan to finally agree, in November 2003, to set aside US$800 million for the acquisition of one EWR station. Initially, the MND considered two options: Raytheon Corp’s AN/FPS-115 Pave

J. Michael Cole is a Taipei-based correspondent on China and Taiwan for Jane’s Defence Weekly, deputy news chief at the Taipei Times, and a regular columnist for The Diplomat.

Strategic Vision is a magazine put out by NCCU's Center for Security Studies and the ROC National Defense University that provides analysis and policy recommendations on issues of importance to regional security in the Asia-Pacific. 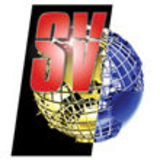