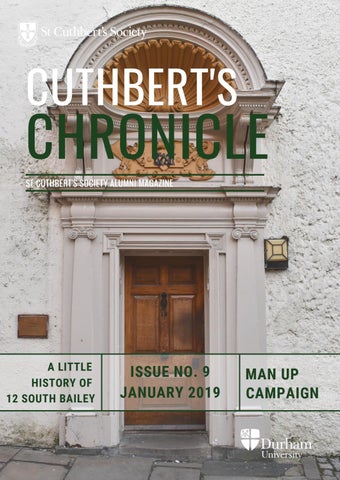 A LITTLE HISTORY OF  12 SOUTH BAILEY

FEATURE: A LITTLE HISTORY OF HOUSE 12

Inside photo: Detail of the bronze bar plaques honouring the generous support given by alumni to the Bailey bar renovation fund.Â

Welcome to the new Assistant Principal

FROM THE JCR JCR Communications Officer Sarah McAllister updates the Chronicle on what the JCR and exec have been up to.

CUTH'SÂ MAN UP IN AID OF MOVEMBER, CUTH'S WELFARE LAUNCHED THEIR 'MAN UP' CAMPAIGN WITH THE HOPE OF DISMANTLING STIGMAS AND BREAKING DOWN BARRIERS WITH REGARDS TO MEN'S MENTAL HEALTH. THE AIM IS TO SHOW MEN THAT SILENCE IS NOT THE ANSWER; SPEAKING UP IS.

LAUREN MCNALLY SENIOR WELFARE OFFICER The aim of the campaign was to bring this stigma to the foreground and shatter it, encouraging men to reach out, and their friends and family to listen. It was run with the hope of dismantling stigmas and breaking down barriers with regards to men's mental health.

WELFARE CAMPAIGN This year the Welfare team decided to do a photo campaign to encourage men to speak out about their mental health as there is a lot of stigma surrounding men talking about mental health issues.

Lauren McNally (Senior Welfare) and Dan Vogel (People of Colour Rep) came up with the idea and he was in charge of photography, taking the shots on Kingsgate bridge, symbolising the fact that suicide is the biggest killer of men under 40. We encouraged people to write issues they, or another man in their life, had faced on their hand and place it over their mouth to represent being silenced by the stigma. For me, this campaign felt very personal as I definitely feel as though I couldn’t open up in the past, but finding the courage to speak out is the most cathartic experience. It was also a chance to get more men involved with Cuth's Welfare. This year the proportion of men in the committee has increased significantly and I believe increasing male representation within Cuth's Welfare is a step towards making men feel as though they can discuss their mental health. It might only be a few black and white photos, but it goes to show the effect we as individuals can have by creating a dialogue surrounding mental health.

"HAVING POSTED MY PHOTO ON SOCIAL MEDIA, THE OUTPOURING OF SUPPORT HAS BEEN OVERWHELMING AND EVEN TOTAL STRANGERS HAVE CONTACTED ME TO SAY HOW MUCH WORK LIKE THIS MEANS TO THEM"

At Cuthâ&#x20AC;&#x2122;s, we are committed to providing the best possible student experience, producing graduates who not only achieve highly in their degrees, but who are also equipped with a diverse range of interests and skills which enable them to thrive in life after University. Thanks to support from alumni, we have been able to offer our students those opportunities.

The Cheshire Fund was generously established by the family of an alumnus of Cuth's to support student opportunities to enhance their knowledge and skills. RACHEL DOBSON (BIOSCIENCES)

CUTH'S AT THE NATIONAL STUDENT DRAMA FESTIVAL Cuth’s Drama’s production of The Events, a play written by David Greig in response to the mass shooting committed by Anders Brevik in July 2011, was one of 16 entries to be selected for the National Student Drama Festival this year in Leicester. Here Kishore Thiagarajan and Athena Tzallas, who were supported by SCR Performing Arts Grants, describe their experiences. Kishore went on to win the Spotlight Award for the Most Promising Actor for his performance.

RESEARCH SPOTLIGHT: RETHINKING COMMENSALITY Cuth's welcomed David Sutton, Professor of Anthropology at Southern Illinois University, Carbondale, as our visiting Institute of Advanced Study Fellow for 2018. During his stay with Cuth's, Professor Sutton has been continuing a recent project on the diverse meanings of food in Greece. This project examines the role of practices such as food sharing, solidarity networks, collective cooking as well as the role of food as symbol in social protests

"Nomiki is describing to me the making of a meat sauce for the dish pastitsio. She begins by listing the main ingredients, and then she comes to the spices, noting, “I added cinnamon, garlic, onion, pepper, bay leaf…” Here she reaches into the pan to pull out a bay leaf and says “I’m using my hand. It doesn’t matter; cooking requires hands.” After listing a few more ingredients, she adds, “The ingredients don’t go in all at once, one at a time, there’s an order in cooking. You’ll put in the cinnamon, then after a little bit the pepper, the salt, the bay leaf, one by one, so that you can hear the smell of each ingredient”

ILLUMINATING ILLUMINATIONS Cuth's SCR members Prof. Andy Beeby from the Department of Chemistry and Prof. Richard Gameson from the Department of History have teamed up to shed light on the materials used in medieval illuminated manuscripts, providing insights into the techniques and skills of medieval illuminators and scribes, as well as the complex trade networks that existed in the Middle Ages. Here, they offer an insight into their project and some of their fascinating discoveries.

A Little History of House 12

The Alumni Association connects alumni to St Cuthbert's Society and the University, and offers social and professional opportunities to the alumni community.

The Ranald Michie Prize Each year, St Cuthbert's Alumni Association awards the Ranald Michie Prize to a first year student for outstanding contributions to the JCR, in honour of the much-loved former Senior Tutor. This year, the Prize went to Saskia Wootton-Cane, now a second-year history student.

ST CUTHBERT'S SOCIETY AND THE FIRST WORLD WAR On the 100th anniversary of the Armistice of the Great War, we remember the six Cuthbert's men who died in service of their country. Thanks to Simon Stanley (History, 1989), who has meticulously researched their biographies, we can gain some insight into the lives of those who served. All the biographies are available on www.cuths.org. The Alumni Association hope to fund a memorial plaque in the gardens of 12 South Bailey in their honour. Henry William Ternent REED 2nd Lieutenant, 1/2nd Battalion, the Monmouthshire Regiment

ST CUTHBERT'S SOCIETY ALUMNI WEEKEND CELEBRATING 125 YEARS OF ST CUTHBERT'S SOCIETY BOAT CLUB From the 14th to 16th September 2018, St Cuthbert’s Society opened its doors to nearly 100 Cuthsmen and Cuthswomen from across the generations in celebration of St Cuthbert’s Society Boat Club’s 125th Anniversary.  Organised in conjunction with the Boat Club and St Cuthbert’s Alumni Association, both rowers and non-rowers alike made their way back to 12 South Bailey for a wonderful weekend, which included the Anniversary Formal and racing on the River Wear. Many alumni have written in to say that they had a fantastic time and that Durham truly is a special place. We hope to see many of them back again in the future.

With thanks to Jessica Wang and Patrick Hurley for the photographs.

How You Can Help

Supporting the next generation of Cuthbert's students 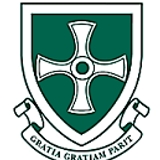